The upper surface at the Hranice Abyss. (Tomas Indrak/GettyImages)

Several years ago, a remotely operated vehicle was descending down into a freshwater cave system, hidden deep under the Czech Republic, when it came to an abrupt end.

Now, new estimates taken from up at the surface suggest we'd need more than twice as much slack to get all the way to the bottom of this profound underwater cavern.

Using recent geophysical surveys of this national gem, known as the Hranice Abyss, scientists have traced the remarkable system of trench-like caves roughly a kilometre down (over half a mile down).

The findings are based on numerous types of geophysical data, including measurements with a gravimeter, in addition to checking electrical conductivity and natural geomagnetic fields in Earth's subsurface.

Together, this can tell scientists the general locations of rocks, minerals, caverns, and valleys that lie below.

While it's not a perfect mapping tool, it does suggest the Hranice Abyss extends much deeper than other estimates, like this one below:

Map of the world's deepest underwater cave, the Hranice Abyss. We still don't know how deep it really is... pic.twitter.com/ywbsNd0eAA

It also calls the cave's origin into question.

The world's deepest flooded cave systems are notoriously difficult and dangerous to study directly, and even with the help of remotely operated vehicles, our reach is limited.

Research has shown that many of these caves contain temperate waters with acidic elements originating from a deep source. The thermal water in the Hranice Abyss, for instance, was found in a 2019 study to contain only five to 10 percent 'modern water'.

This has led many to suppose these caves were formed from the bottom-up, with the acidic inner core of our planet slowly eating away at the limestone rock above.

But this idea, known as hypogenic formation, doesn't take into account each region's specific geology or tectonic activity, and caves can be formed from the top down, too.

Underneath the Hranice Abyss, the authors of the new research have found evidence for a large-scale network of underground structures made from soluble rock, known as a karst system to geologists. 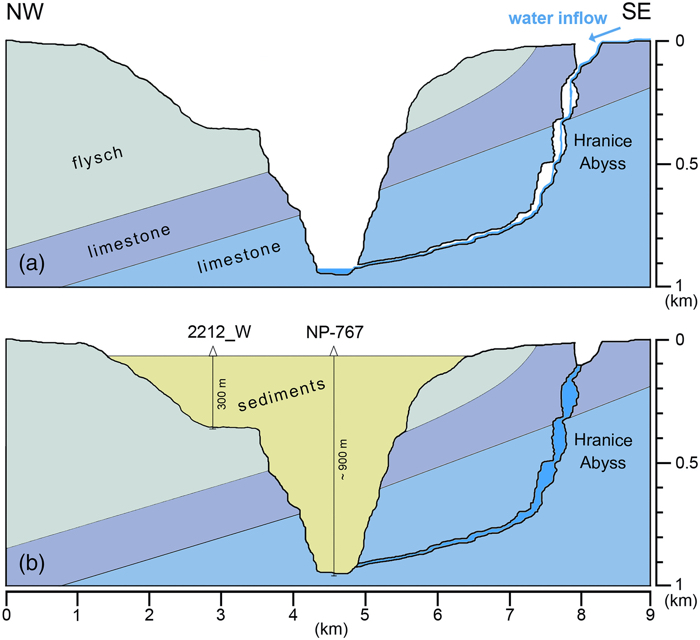 Some of these underground caverns are filled with freshwater, and others with sediment, but the reappraisal suggests they were created by erosion from the top down – at least at first.

In the mid-Miocene, the authors think water probably ran from the mountains into a basin, which gradually carved out caverns in the limestone through erosion. A former drainage system, found connected to the abyss, supports that theory.

"Subsequent sediment deposition (via sea‐level rise) and infill of these canyons caused spring outflows to become blocked and the cave systems to be flooded with fresh water," the authors suggest.

Only after this would acidic water have welled up from below, the team thinks, bringing deep Earth isotopes up to the surface for us to find later.

If this origin story is right, we might need to reassess other deep, flooded caves in Italy, South Africa, and Brazil, which we assumed were formed from the bottom up.

Nevertheless, the authors admit it's very possible that the top-down erosion is somehow masking earlier bottom-up sculpting, making it appear as though the cave was created from above.

Geologist Francesco Sauro from the University of Bologna, who was not involved in the study, told Science it was worth re-examining other sites in light of these new and "impressive" estimates.

The study was published in the Journal of Geophysical Research: Earth Surface.