For the first time in nearly 100 years, the shadow of a total solar eclipse is going to sweep across the United States.

The umbra — the darkest shadow cast by the moon blocking the sun — will appear in the Pacific Ocean and slice through 12 US states on Monday, August 21.

Starting around 10am PDT, parts of western Oregon will go dark in a condition called totality as the umbra travels east. The elliptical shadow will make its way to Idaho Falls by 11.33am MDT, hit Kansas City at 1pm CDT, and begin to pass over Charleston, South Carolina, by about 2.45pm EDT.

Although some eclipse fans spend years preparing for the event, totality lasts less than three minutes — so all it takes is one stray cloud to obscure the magic moment.

That's why some people pay thousands of dollars to fly in chartered jets and pursue the moon's shadow. In addition to beating the odds of bad weather, such hardcore "eclipse chasers" can extend their length of time in the umbra, sometimes by several minutes.

I was lucky enough to ride an eclipse-chasing flight on August 1, 2008. Here's what the experience was like.

Total solar eclipses aren't rare – they happen about once every 18 months – but most locations on Earth fall in one's path roughly once every 375 years. That's because the umbra averages less than 100 miles wide near the equator – a fraction of a percent of Earth's day-side surface area.

However, some hardcore eclipse chasers spend thousands of dollars to chase the moon's shadow from the skies.

In 2008, when I was a freelance journalist, a sightseeing company called Polarflug offered to fly me to Germany and chase the August 1 total solar eclipse. I said yes.

Before this, the closest I'd ever come to seeing an eclipse was in grade school. It was an annular eclipse (where the moon doesn't fully block the sun) – but my teachers wouldn't let me outside for fear I'd damage my eyes.

After a flight across the Atlantic Ocean, I landed in Düsseldorf, Germany, where more than 140 eclipse chasers had also gathered. We stayed overnight, woke up at 3am on the morning of the eclipse, and rode tour buses to the airport.

Our flight would last 12 hours. After chasing the umbra, we'd turn north for a quick pass over the North Pole. Our destination sign at Düsseldorf Airport prompted a lot of quizzical looks from passers-by. Though we'd miss the maximum eclipse point, where totality lasts the longest, our Airbus A330 could travel at about 900km/h (560mph). This would help us chase the moon's east-moving umbral shadow and give an extra 30 seconds or so in darkness.

Kelly Beatty, an editor for Sky & Telescope, also helped plan the trip. "A total solar eclipse is one of nature's most awesome events," Beatty told me. "Anyone who's seen one knows that."

But seeing totality from a plane, Beatty added, is an altogether different experience. "The sky is that much clearer and that much blacker. And that makes the corona that much brighter and more electric. It's really an electric-looking phenomenon." 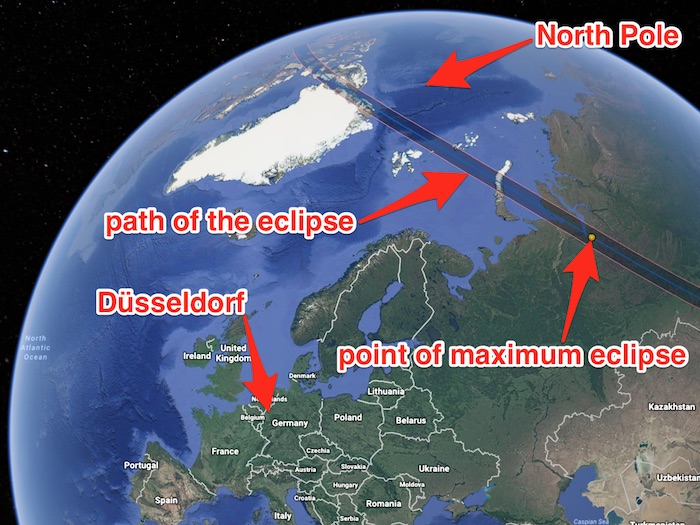 The trip wasn't cheap. An American passenger told me that some customers paid about AUD$12,000 for a window seat – and brought along their families, too.

"It's a lot of money. I see it being a barrier for people," the passenger told me, adding that the trip was "the most expensive of his life."

Clint Warner, a nutritionist I met wearing what he called a "solar eclipse suit," said this was his 12th total eclipse. "It's the most amazing natural phenomenon I've ever experienced. It's always intoxicating," he said.

Passenger and lawyer Sharon Grey offered some advice for first-time eclipse watchers: "Just watch it. Don't worry about anybody else or the camera," she said. "Just succumb to the experience." Our chartered jet took off around 5.45am and we began flying north toward the Arctic. The umbra wouldn't pass overhead for another four hours, so we passed the time by sleeping or gazing at a seemingly endless plane of jagged sea ice.

The plane also flew over the rugged terrain of Svalbard, a mountainous archipelago, and its glaciers.

Soon, the moon began to slip in front of the sun – a moment called 'first contact.' Then the skies slowly gradually began to darken.

We were flying through the lighter outer shadow of the moon, called the penumbra.

The pilot ordered everyone to their seats, and passengers scrambled to the starboard windows. Schneider began to excitedly narrate every stage of the eclipse over the intercom.

My heart raced as the moon reached 'second contact' – the start of totality, when the umbra would pass over our jet. For a moment, a tiny sliver of light was all that remained of the sun… Then a brilliant burst of light appeared, a stage called the 'diamond ring.' That's the point when you can first see the corona, or outer atmosphere of the sun.

The next few minutes were a blur, but I clearly saw a solar prominence – a giant wisp of plasma arcing off the sun's surface – and the tendrils of the corona. 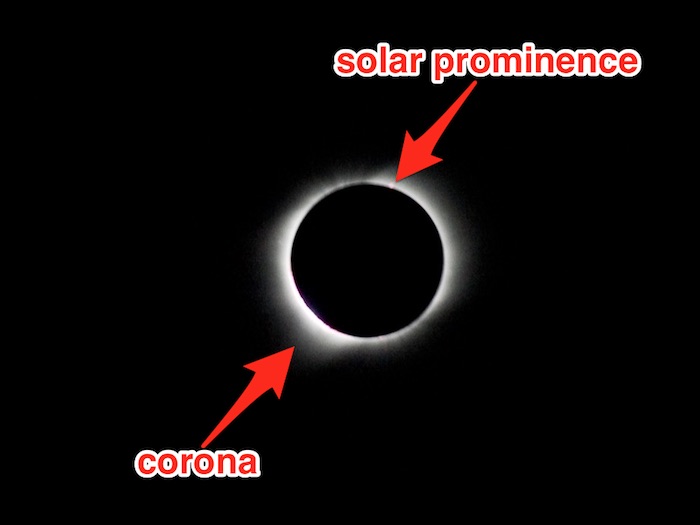 When I looked away from the eclipse, I was shocked by the darkness of the umbral shadow on the clouds, ice, and ocean. Its edge looked like a cross between a sunrise and a sunset. I could also see stars and planets in the sky.

Totality ended after three minutes with the appearance of a second 'diamond ring' on the opposite side of the moon. The eclipse phases then moved in reverse as the umbra sped eastward ahead of our jet. After totality, two passengers – Joel Moskowitz and Craig Small – paraded a custom eclipse flag around the cabin. The two were the most devout eclipse chasers I'd ever met.

"I have no intention of ever missing an eclipse for the rest of my life. I don't care where it is, even in the remotest area of the Earth," Small told me. "I have to be there, I will be here."

"When you see one, you want to see more. You get hooked," Moskowitz added. "Seeing the corona during totality is better than sex."

The trip wasn't over, though. The aeroplane banked hard and turned toward the North Pole. At the time, it looked like this – a bunch of fractured sea ice.

The only indication that we'd arrived at the Pole was an announcement over the intercom. Back on the tarmac in Düsseldorf, the group snapped a celebratory photo, and then everyone began making their way home.

That evening I watched the sun set on the Rhine River and reflected on my experience. More than anything, I felt humbled. There's nothing like an epic astronomical alignment to make you feel like you're riding a spaceship through an infinite void.