Have you ever admired someone so much that you captured their final, dying breath in a test tube to keep around your house forever? No? Well, you must not take life advice from Henry Ford - the man who gave the world the first gas-powered automobile.

Legend states that, in order to remember his hero, Thomas Edison, he had Edison’s son bottle his father’s last breath and give it to him as a keepsake, which you can visit in the Henry Ford Museum, if you’re into that sort of thing.

The weird story starts back in the late 1800s when Ford was an employee at Edison’s company where he was he was a chief engineer. In his free time, Ford was in the middle of designing an invention that would change the world: the automobile.

One day, at a company party, Ford finally got the chance to approach Edison and explain his idea to him. According to Annetta Black from Atlas Obscura, Edison was extremely supportive of his employee’s invention, saying: "Young man, that's the thing! You have it! Your car is self-contained and carries its own power plant."

Surprisingly, Edison didn’t just steal the idea from Ford, which he probably could have done, because Edison. Instead, the two fast became friends and spent a lot of time together in the early 1900s when Ford’s business took off and everyone was clamouring to buy their own personal cars.

With both seeing an immense amount of success, it stands to reason that the two bounced ideas off each other and influenced each other’s works or, at the very least, supported one another.

As Edison’s health began to fail, Ford treated him to wheelchair races and other activities that BFFs typically do. According to Black, at an event for the lightbulb’s 50th anniversary, Edison said: "As to Henry Ford, words are inadequate to express my feelings. I can only say that in the fullest meaning of the term, he is my friend."

So, when Edison was on his death bed in 1931, Ford wanted one last keepsake to remember his friend of over 30 years. While most of us would want a watch or a personal belonging,

Ford went a little more extreme: he reportedly asked Edison’s son, Charles, to capture his father’s dying breath in a test tube. (You can get all poetic here if you want and say that he wanted, basically, Edison’s life force or energy or whatever, but at the end of the day it was still death breath.) 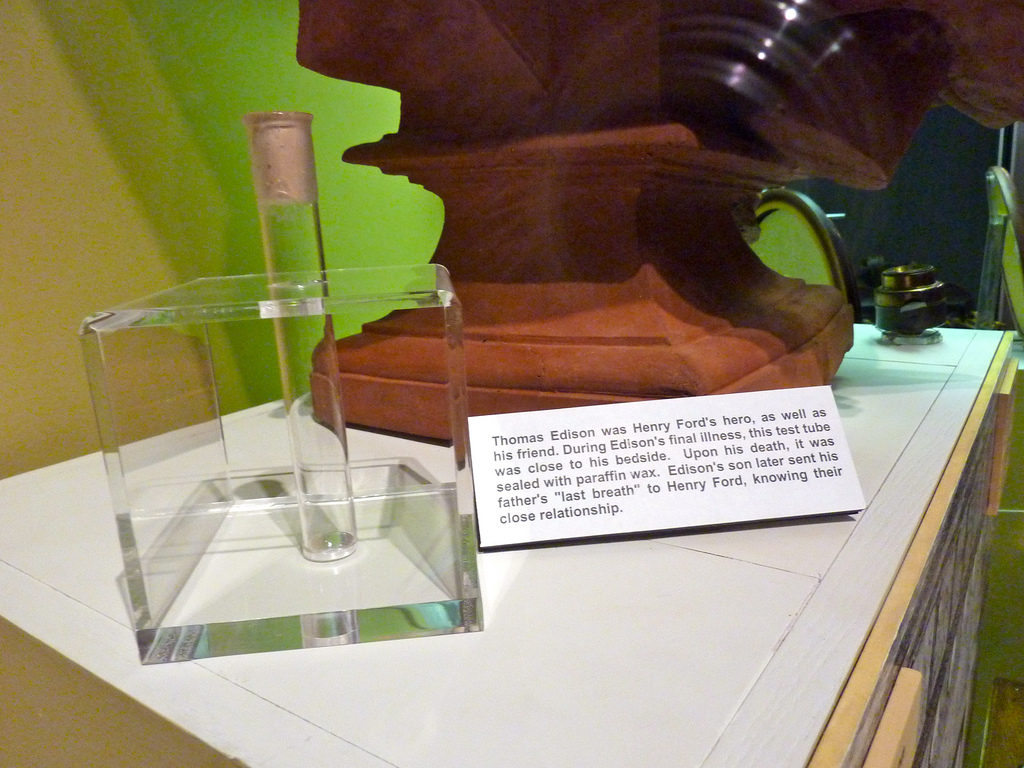 When Ford passed away years later in 1947, his belongings were donated to the Henry Ford Museum in Dearborn, Michigan, where it was stored in a box for more than 20 years.

Along with many other items, museum employees rediscovered the mysterious test tube in 1978 and it has been on display ever since. It’s around this time that word of the 'dying breath' began to spread.

Though the test tube has since achieved legendary status, some claim that the story might not have gone exactly the way it was reported.

According to Rebecca Onion from Slate, it’s more likely, based on letters from Charles Edison, that the test tube was simply in the room when Edison died and, therefore, contains the last air that he breathed, though it seems impossible to truly prove it either way.

Whether it was held in front of him or just remained in the room, Ford still treasured the air that Edison once breathed, so much so that he bottled it up and kept it. Which is both sweet and one of the weirdest things you could ever do.