The rotation of giant discs of dust and gas swirling into supermassive black holes billions of light-years away may sound like a difficult thing to measure, but astronomers have found a way to do it.

Using a new technique, researchers have determined the spin of five accretion discs - finding that one, in a quasar called the Einstein Cross, is zipping around at over 70 percent of the speed of light.

It all comes down to observations in X-ray wavelengths, combined with a cosmic effect called gravitational lensing.

See, there's some stuff in the Universe that has so much mass that it generates a powerful gravitational field around it. Massive galaxies and clusters of galaxies, for instance.

When the light behind that field passes through it, the gravitational force is so strong that it bends the path of the light. This is what gravitational lensing is: where bent light creates multiple images of an object, allowing us to see details that would otherwise have been too distant to make out.

This effect is really handy for astronomers, and there are quite a few lensed objects out there that have given us insight into the Universe's evolution, including lensed quasars.

These are among the brightest objects in the Universe: extremely luminous galactic cores powered by actively feeding supermassive black holes. As the accretion disc of material swirls around the black hole, its friction generates such intense radiation that we can see it even from billions of light-years away. 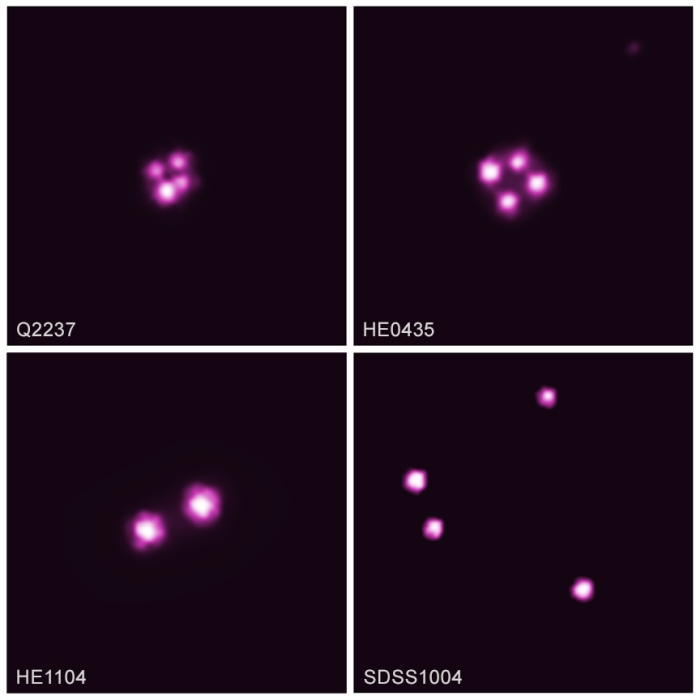 When viewed through a gravitational lens, we can see even greater detail.

In this study, to calculate the rotation rate of five of these lensed quasars (ranging between 8.8 billion to 10.9 billion light years away), the research team added a final crucial ingredient to help gauge their rotation: microlensing.

This is just like galaxy-scale lensing, but smaller, using the lensing effect created by individual stars in the lensing galaxy, rather than galaxies or clusters of galaxies. The technique creates additional magnification - which, in turn, means that a smaller region must be producing the X-ray emission observed.

We know that a spinning black hole drags space-time around with its rotation: a phenomenon called frame-dragging. This means that the inner edge of the accretion disc can orbit closer to the black hole than for a black hole that isn't spinning. The faster the black hole's spin, the closer the orbit.

X-rays are generated when the rapidly spinning accretion disc creates a high-temperature corona above the disc, close to the black hole. These X-rays reflect off the inner edge of the accretion disc, and are distorted by the black hole's gravitational forces.

A smaller region of X-ray emission implies a very tight orbit, which, in turn, means the black hole must be spinning pretty fast. Based on observations taking using NASA's Chandra X-ray Observatory, this is what the team used to calculate the spin rate of the black holes.

The Einstein Cross black hole was spinning the fastest, as close as we've seen to the maximum rate possible. Emanating from a region just 2.5 times the size of the black hole's event horizon, the X-ray emission indicated a spin rate of 70 percent of the speed of light.

This implies that the event horizon is spinning at the speed of light.

The other four black holes were not quite so dramatic; the detected X-ray emission came from regions four to five times the size of their event horizons, indicating they were spinning at around half the rate of the Einstein Cross black hole.

In addition, all five showed high levels of distortion, which also implies close proximity to the black hole - and high spin rates.

These black holes are pretty huge, with masses between 160 and 500 million times that of the Sun. The Milky Way galaxy's supermassive black hole is only about 4 million solar masses, and relatively quiet.

The researchers think that the quasar black hole rotations became so fast because they were continuously accreting matter for a long period of time - billions of years - along the same spin orientation. Because there was nothing to slow them down, they just kept getting faster.

"Unfortunately," the researchers write in their paper, "the spin measurement technique presented in this paper can only be used to analyse the small sample of targets whose X-ray spectra can be measured with sufficient signal-to-noise ratios using the current generation of X-ray telescopes."

We hope the next generation can tell us more, because this is wild.