Even After Emissions Are Reduced, We'll Still Have to Contend With 'Committed Warming'

By now, few people question the reality that humans are altering Earth's climate. The real question is: How quickly can we halt, even reverse, the damage?

Part of the answer to this question lies in the concept of 'committed warming,' also known as 'pipeline warming.'

It refers to future increases in global temperatures that will be caused by greenhouse gases that have already been emitted. In other words, if the clean energy transition happened overnight, how much warming would still ensue?

Earth's energy budget is out of balance

Humans cause global warming when their activities emit greenhouse gases, which trap heat in the lower atmosphere, preventing it from escaping out to space.

Before people began burning fossil fuels to power factories and vehicles and raising methane-emitting cattle in nearly every arable region, Earth's energy budget was roughly in balance. About the same amount of energy was coming in from the Sun as was leaving.

Today, rising carbon dioxide concentrations in the atmosphere are more than 50 percent higher than they were at the dawn of the industrial age, and they're trapping more of that energy.

Those carbon dioxide emissions, together with other greenhouse gases such as methane, and offset by some aspects of aerosol air pollution, are trapping energy equivalent to the detonation of five Hiroshima-style atomic bombs per second.

With more energy coming in than leaving, Earth's thermal energy increases, raising the temperature of land, oceans, and air and melting ice.

Warming in the pipeline

The effects of tampering with Earth's energy balance take time to show up. Think of what happens when you turn the hot water faucet all the way up on a cold winter day: The pipes are full of cold water, so it takes time for the warm water to get to you – hence the term 'pipeline warming.' The warming hasn't been felt yet, but it is in the pipeline.

There are three major reasons Earth's climate is expected to continue warming after emissions stop.

First, the leading contributors to global warming – carbon dioxide and methane – linger in the atmosphere for a long time: about 10 years on average for methane, and a whopping 400 years for carbon dioxide, with some molecules sticking around for up to millennia. So, turning off emissions doesn't translate into instant reductions in the amount of these heat-trapping gases in the atmosphere.

Second, part of this warming has been offset by man-made emissions of another form of pollution: sulfate aerosols, tiny particles emitted by fossil fuel burning, that reflect sunlight out to space.

Over the past century, this global dimming has been masking the warming effect of greenhouse emissions. But these and other man-made aerosols also harm human health and the biosphere.

Removing those and short-lived greenhouse gases translates to a few tenths of a degree of additional warming over about a decade, before reaching a new equilibrium.

Finally, Earth's climate takes time to adjust to any change in energy balance. About two-thirds of Earth's surface is made of water, sometimes very deep water, which is slow to take up the excess carbon and heat. 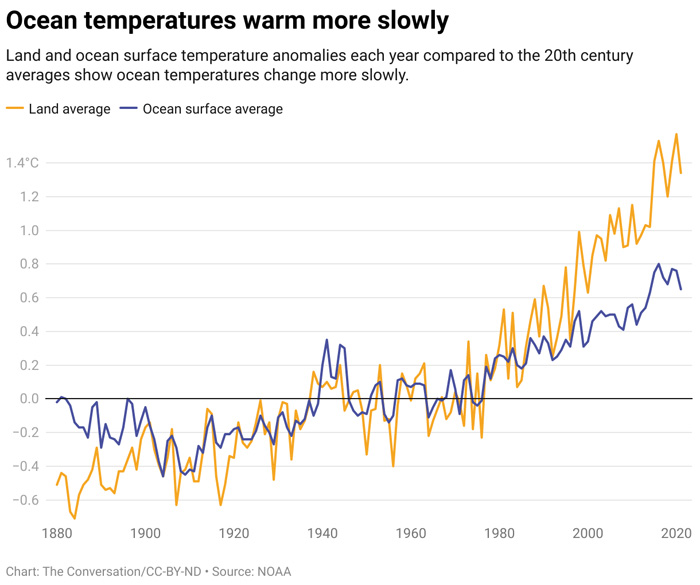 So far, over 91 percent of the heat added by human activities, and about a quarter of the excess carbon, have gone into the oceans.

While land-dwellers may be grateful for this buffer, the extra heat contributes to sea level rise through thermal expansion and also marine heat waves, while the extra carbon makes the ocean more corrosive to many shelled organisms, which can disrupt the ocean food chain.

Earth's surface temperature, driven by the imbalance of radiant energy at the top of the atmosphere, and modulated by the enormous thermal inertia of its oceans, is still playing catch up with its biggest control knob: carbon dioxide concentration.

So, how much committed warming are we in for? There isn't a clear answer.

The world has already warmed more than 1.1 degrees Celsius compared to pre-industrial levels. Nations worldwide agreed in 2015 to try to prevent the global average from rising more than 1.5°C to limit the damage, but the world has been slow to react.

Determining the amount of warming ahead is complicated. Several recent studies use climate models to estimate future warming. A study of 18 Earth system models found that when emissions were cut off, some continued warming for decades to hundreds of years, while others began cooling quickly.

Another study, published in June 2022, found a 42 percent chance that the world is already committed to 1.5 degrees.

The amount of warming matters because the dangerous consequences of global warming don't simply rise in proportion to global temperature; they typically increase exponentially, particularly for food production at risk from heat, drought, and storms.

Further, Earth has tipping points that could trigger irreversible changes to fragile parts of the Earth system, like glaciers or ecosystems. We won't necessarily know right away when the planet has passed a tipping point, because those changes are often slow to show up. This and other climate-sensitive systems are the basis for the precautionary principle of limiting warming under 2°C, and preferably, 1.5°C.

The heart of the climate problem, embedded in this idea of committed warming, is that there are long delays between changes in human behavior and changes in the climate.

While the precise amount of committed warming is still a matter of some contention, evidence shows the safest route forward is to urgently transition to a carbon-free, more equitable economy that generates far less greenhouse gas emissions.