What Happens if 4 Electrons Join Up? A Brand New State of Matter Says a Recent Study

Almost 20 years after researchers first predicted electron quadruplets, evidence of their existence has been shown to occur in experimental setups, representing a brand new state of matter that opens up a whole new field of possibilities in physics.

Technically what we're talking about here is fermionic quadrupling, referring to the type of particles involved and how they're interacting with each other. Now that scientists have found it, they can get to work on figuring out how to use it.

If you think about superconductivity, where electrical resistance is zero, you need pairs of electrons – known as Cooper pairs – to form and condense. Something very similar occurs with four electrons in this new state.

"It will probably take many years of research to fully understand this state," says theoretical physicist Egor Babaev from the KTH Royal Institute of Technology in Sweden and the senior researcher for the new study. Babaev made the original 2004 prediction about this state of matter.

For electron quadrupling to occur, the particles need to be prevented from pairing up and flowing without resistance in normal superconductor conditions, something that scientists weren't even sure was possible until recently.

Babaev and his colleagues looked at an iron-based superconductor material called Ba1−xKxFe2As2 (seen below) for their experiments, previously identified as potentially producing unusual effects. The material was tested for electrical resistance and other properties at a range of different temperatures. 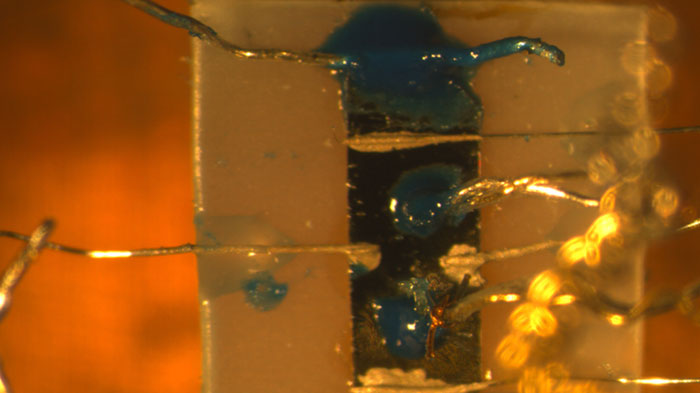 The experiments showed evidence of the breaking of time-reversal symmetry, a concept in physics where turning time expressions negative in formulas can run the same event backward or turn motions in the opposite directions.

"However, in the case of a four- fermion condensate that we report, the time reversal puts it in a different state," says Babaev.

Taken together, the measurements recorded from the experiments point to long-range order: not between pairs of electrons (as in superconductivity), but between pairs of pairs. That's fermionic quadrupling and a new state of matter.

The state of superconductivity is used everywhere, from quantum computers to magnetic resonance imaging ( MRI) scanners, but it remains to be seen what's in store for the new state of matter made possible by fermionic quadrupling. It's being called a BTRS (broken time-reversal symmetry) quartic metal phase.

With other recent studies pointing towards more and more superconductors that don't have the symmetry or the stability that had previously been expected of these materials, the researchers say these kinds of states of alternative matter might not be all that rare.

"The experiments open up a number of new questions, revealing a number of other unusual properties associated with its reaction to thermal gradients, magnetic fields, and ultrasound that still have to be better understood," says Babaev.