According to a survey of artificial intelligence experts, AI will probably be good enough to take on pretty much most of our jobs within half a century.

While there's plenty of room for debate on the details, the predicted applications of AI could serve as an alarm bell for us to consider how our economy and job market will adapt to ever smarter technology.

A team of researchers from the University of Oxford and Yale University received 352 responses to a survey they'd sent out to over 1,600 academics who had presented at conferences on machine learning and neural information processing in 2015.

The survey asked the experts to assign probabilities to dates in the future that AI might be capable of performing specific tasks, from folding laundry to translating languages.

They also asked for predictions on when machines would be superior to humans in fulfilling certain occupations, such as surgery or truck-driving; when they thought AI would be better than us at all tasks; and what they thought the social impacts could be.

The researchers then combined the results to determine a range of time stretching from a low 25 percent confidence to 75 percent certain, calculating a median point when most experts were hedging their bets.

You can check out the results in the table below. 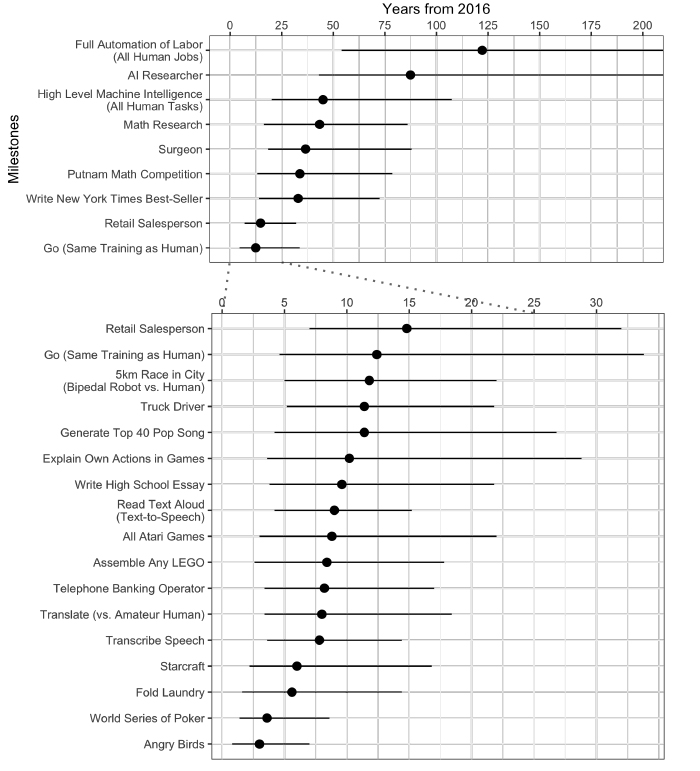 Most of the academics seem fairly confident that we'll have an AI be better than all humans at playing Angry Birds within the next seven years, and that we can start to place bets on AI winning World Series Poker within a decade.

We can bet there's a 50 percent chance robots will be better than us at folding laundry in about six years, followed very soon by an AI winning the strategy computer game StarCraft.

If you drive a truck for a living, there's a slim chance you'll be competing with automated drivers in just over five years, but you can be fairly sure there'll giving up the road to driverless trucks in just over 20 years.

There's a good chance we'll see a book written by an AI in the New York Times bestseller list in 26 years and a top 40 pop song in maybe 12 years.

And just in case you think you'll play it smart and develop the AI that is going to take over the world, the experts think there's a slim chance that machines will be the ones developing AI within half a century, and odds-on they'll be running the show in about 80 years.

The researchers set the 50 percent chance line for artificial intelligence being better at just about everything – a point they describe as High Level Machine Intelligence – in just under 50 years. At which point they think there's a likelihood that AI will be capable of doing just about any job you can imagine by 2140.

Just how much should we trust the experts on this one?

It might help to know that when they completed the survey back in 2015, on average they estimated there was only half a chance AI would beat the world champion at the game Go in about 12 years.

That's a skill we can now pretty much set to 100 percent accomplished, with the recent news of Google's DeepMind AlphaGo AI beating world champion Ke Jie in the first of a three-match series.

So it's possible the academics might simply be a little conservative in their estimates. In addition, experts in Asia saw AI progress occurring on average much sooner than those in North America, suggesting culture will affect our ability to predict.

While some jobs and skills are clearly on the horizon, it's a big call to say AI will probably be good at just about everything in 45 years.

An article at MIT Technology Review makes a compelling argument on why any prediction of "40 years in the future" should ring alarm bells: it is also the length of a single career, putting it outside of the span of any one person's current job.

In other words, we tend to optimistically imagine the technological advances required for some things occurring after our time.

The research is available on the pre-publish website arXiv.org, so hasn't yet been peer reviewed.

Even if the details are still up for discussion, we can be fairly confident that as time goes on, technology will at least be capable of doing a better job than your average human.

"While individual breakthroughs are unpredictable, longer term progress in R&D [research and development] for many domains (including computer hardware, genomics, solar energy) has been impressively regular," the researchers write.

As determined recently by a pair of US economists, we should expect significant impacts to particular fields in industry.

That isn't to say we can expect economics collapse and universal joblessness, either; going by history, technology creates more jobs than it destroys.

Give it a few decades and we'll be able to ask AI what they think we should do.