It seems like many of us follow in our parents' footsteps when it comes to choosing a career, but in reality, how often does it actually happen? And if we don't follow our parents into the same line of work, how do their occupations affect what we ultimately end up doing ourselves?

Data scientists at Facebook have called upon the social network's massive data set to come up with some answers to this, using a giant sample of some 5.6 million parent-child pairs from English-speaking locales. Not everybody lists their occupation or family relationships on Facebook, so the company was only able to draw upon users who had specified parent-child connections and filled out their careers, but there's obviously still plenty of data to draw upon.

When you click on an occupation category on the left (parents' occupation), the graph morphs to visually show you the probability of their offspring ending up in the same or other job categories on the right. 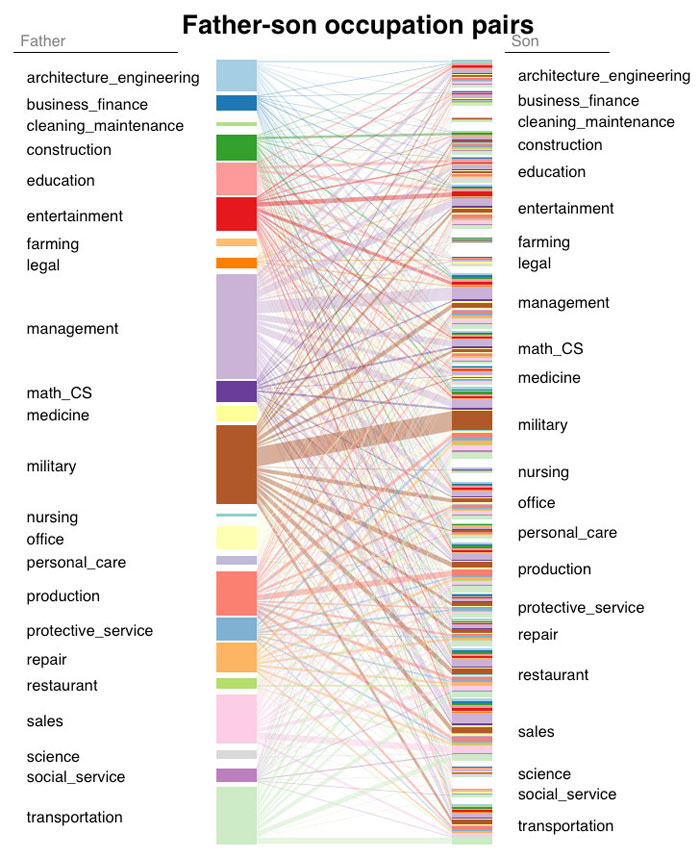 Facebook doesn't share the actual numerical probabilities in the interactive map, so you won't be able to see these kinds of specific digits yourself, but it's amazing to get a visual sense of how our parents' jobs affect our own professional paths, at least from a statistical perspective.

One of the interesting things about the findings is that while parental occupations may affect the likelihood of us following in their footsteps, the absolute percentage of this happening remains very low. For example, a son with a military dad is 5 times more likely to enter the military than someone without a military dad, but in reality, only 1 in 4 sons of a military professional does so.

In other words, our parents' careers may make us much more likely to do the same job compared to other people, but it's just an influence – most people don't directly follow in their mum's and dad's footsteps professionally.

Facebook's data also makes it clear that having a sibling or a twin affects your probability of having the same occupation.

"15 percent of siblings share an occupation, which is higher than the 8.6 percent rate for any two same-gender, same-age individuals in the population," write Ismail Onur Filiz and Lada Adamic from Facebook's Core Data Science team. "Twins' tendency to choose the same occupation, at 24.7 percent, is even more striking."

You can see the twins and siblings probabilities mapped on another interactive visualisation here.

But why do people end up choosing the same occupations as their parents, siblings, and twins? The researchers say numerous factors could be at work, all of which contribute to the decisions we end up making.

"Parents pass on their genes, set an example, provide opportunities, and give advice to either aim for or steer clear of their own lines of work," Filiz and Adamic suggest.

In the case of siblings, they share the same parents and would be exposed to similar parenting styles, even if that style changes over the course of raising multiple kids. Plus, they're most often raised in the same environment, and for identical twins, they even share the same genes.

While there's been a staggering amount of research on how parents' education, income and, work status affects the development of their children, there's less published research looking directly at whether children follow directly in their family's footsteps.

According to Laurie Cohen, a researcher in work and organisation at Nottingham University Business School in the UK, it could come down to how parents shape their kids' values and ideologies by setting an example of what's ultimately important.

"Parents often provide a set of principles that can be central to their children's career trajectories," she told Gill Plimmer at FT.com.

In any case, it appears to be an influence that's declining – at least when it comes to following our parents' professional paths directly. A study by family history site Ancestry.co.uk found that only 7 percent of children end up in the same job as their parents today, whereas it was nearly half of children (46 percent) in Victorian times.

Obviously the job market has changed more than a little since then, but even so, it's clear we're striking out on our own more than ever before!