They're among the most popular and captivating animals in the ocean – a creature that delights at every splash or glimpse. And many are dying.

A deadly skin condition, first noted in dolphins near New Orleans after Hurricane Katrina in 2005, has now been formally identified by scientists.

'Freshwater skin disease', as researchers define the pathology in a new study, has afflicted coastal cetaceans in numerous parts of the world, producing severe lesions that can cover most of the animal's body.

The exact cause of this mysterious disease has never been known, but now, thanks to new research, we have a grim explanation: environmental changes in the dolphins' marine habitat that are linked to climate change. "This devastating skin disease has been killing dolphins since Hurricane Katrina, and we're pleased to finally define the problem," says chief pathologist Pádraig Duignan from the Marine Mammal Centre in Sausalito, California.

"With a record hurricane season in the Gulf of Mexico this year and more intense storm systems worldwide due to climate change, we can absolutely expect to see more of these devastating outbreaks killing dolphins."

While the signature lesions of freshwater skin disease were first observed in the US, it was their manifestation in animals on the other side of the world that gave Duignan and his team a crucial lead in their investigation.

Two dolphin mortality events in Australia produced evidence of the same affliction – one affecting Burrunan dolphins (Tursiops australis) in the Gippsland Lakes of Victoria in 2007, the other in 2009 among Indo-Pacific bottlenose dolphins (T. aduncus) in the Swan-Canning River system in Western Australia.

"While these events are historical, they enabled us to conduct post-mortems on the dolphin carcasses to identify the cause of their death, characterise the severe skin lesions typical of the disease, and to see if there is a correlation between these events and others around the world," explains veterinary pathologist Nahiid Stephens from Murdoch University in Australia.

According to the analysis, there is indeed a correlation across the global instances of the condition. 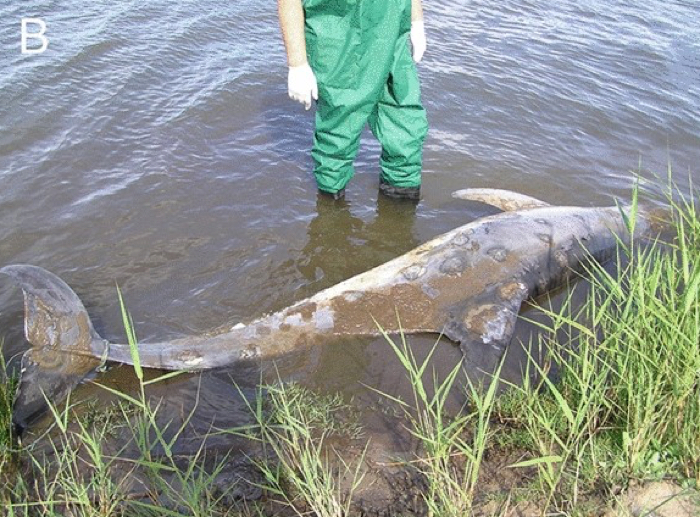 Freshwater skin disease outbreaks appear to follow in the wake of severe storms such as hurricanes and cyclones, in which a massive volume of freshwater rain falls onto land, with subsequent run-off finding its way into rivers and coastal waters.

The danger of such sudden deluge events is that they rapidly diminish the salinity of the saltwater that coastal dolphins live in – producing hypo-saline conditions that can persist for weeks or months, as environmental monitoring data from the Australian sites show.

Dolphins can tolerate hypo-saline conditions, but only for a short while, with prolonged exposure to freshwater resulting in a range of changes to the animals' skin and blood chemistry, producing dermatitis, lesions, and other physiological stresses, accompanied by opportunistic colonisation by algae, diatoms, fungi, and bacteria.

"The breaks in the skin cause the dolphin to lose vital ions and proteins from their bodies … so when all of that is oozing out of them, the fresh water then rushes in which causes swellings and ulcers," Stephens told the Australian Broadcasting Corporation.

"The lesions are equivalent to third-degree burns in humans – an horrific injury that can very rapidly result in death. It kills them because it causes electrolyte disruptions in their [the dolphins] blood stream and they ultimately end up with organ failure."

Worse still, as the researchers point out, the frequency of severe weather events such as floods, storms and cyclones is expected to increase under climate change, which could result in more devastating flood events for estuaries, lagoons and coastal marshes – likely triggers for more freshwater skin disease outbreaks.

While there's not a lot of positive news to find in this bleak discovery, at least we know what dolphins are dealing with now, and researchers say we may be able to use that knowledge to help dolphins in coastal environments.

But we don't have forever to act.

"If they're pushed to the brink we may lose them and they'll completely die out," Stephens said.

"We have to tackle the wicked problem of climate change which is multi-faceted and we also have to alleviate other threats to dolphins, because how many more wake-up calls do we need before it's too late?"