Keep your eyes peeled this week for some spectacular fireballs – extremely bright meteors – lighting up the sky, like this one caught on camera in Thailand on November 2:

“The best time to view the Taurids is from midnight to 3am [EST] local time,” NASA wrote in a Reddit AMA. “There should be a handful per hour. Taurid rates are not high, but the ones you will see will be very bright.”

The shower may have already peaked in Australia, but if you’re feeling lucky, you’re still a good chance to catch a rogue or three. One watcher reported a bright fireball to the ABC he saw just last night from the NSW south coast.

The best time to watch is from midnight to 3am (EST). Look towards the Taurus constellation in the north-east. From there, the shower will move north-west as dawn approaches.

The best way to watch any meteor shower is to get far away from city lights and simply look up, no special equipment required. Here’s a map from AccuWeather showing where the best spots in the US are to see the Taurids Monday night: 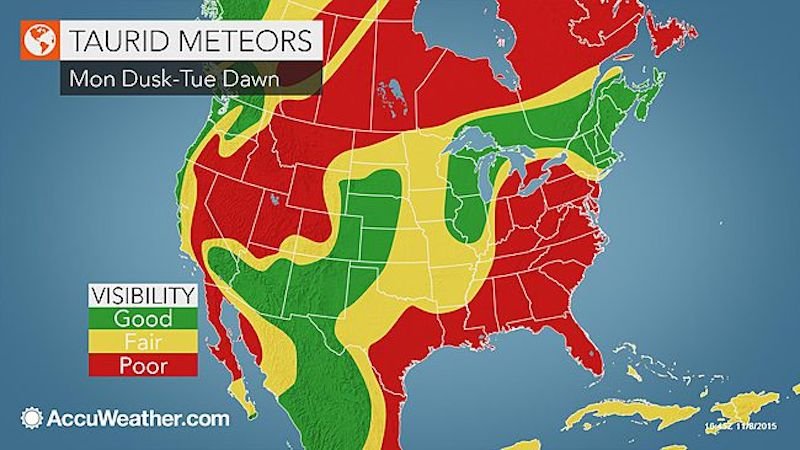 Meteor showers usually happen when Earth passes through a comet’s stream of residual dust and debris in space.

The debris collides with our planet, is pulled toward Earth’s centre by gravity, and burns up in the atmosphere, producing bright streaks in the night sky that we sometimes refer to as falling stars.

As a result, the Taurids appear to move slowly across the sky, so you can easily spot and track them with your naked eye.

Most of the meteors will likely appear to come from the direction of the constellation Taurus (hence the name Taurid meteors). Between the hours of midnight and 3 am (EST), Taurus will be high in the night sky above the southern horizon.

You can use an app like Star Chart to figure out where Taurus will be in your night sky at peak viewing times.

There are a couple of reasons why NASA suspects that this year’s Taurid meteor shower will be worth watching. First is that when the meteor shower peaks on the evening of Wednesday November 11, the moon will be new.

So, there will be no moonlight to outshine the meteors, and observers will have an especially dark night sky to enjoy the show. NASA estimates that during peak hours viewers can see between 7 to 10 meteors an hour.

While those numbers don’t stack up to the 100 meteors an hour you can sometimes see during the Perseid meteor shower in August, it’s still worth watching since some of these meteors are likely to be brilliant fireballs.

One of the special features about the Taurid meteor shower is that it often produces a number of fireballs, which are meteors that are defined by their brightness.

Fireballs are at least as bright as Planet Venus, which is the brightest object in the night sky, besides our Moon. A single fireball can briefly light up a large chunk of the night sky, and therefore are some of the most exciting meteors to watch for.

About every 10 years, Earth passes through a particularly dense stream of Comet Encke’s tail – left-over debris that the wind and heat from the sun blew off the comet’s surface and into space. These years are called ‘swarm years’.

The last time we saw a noteworthy Taurid meteor shower was in 2005, which means 2015 is also a swarm year and our lucky, once-in-a-decade opportunity for a good show with above-average meteor rates and more fireballs!

Check out the full video of a fireball streaking across Thailand on November 5 of this year.