Venus is the second planet orbiting our Sun in the Solar System. Circling at an average distance of approximately 108 million kilometres (around 67 million miles) from the Sun, it sits between the orbits of Mercury and Earth.

While it takes our planet just under 24 hours to do a complete 360 degree rotation, Venus takes a smidge over 243 Earth days to do the same. In that time it's already travelled completely around the Sun once, a trip that takes just 225 Earth days.

If we define a day by the amount of time between two sunrises, this slow journey means a Venusian day is nearly 117 days long.

Weirder yet, the direction of its rotation is opposite to most planet's, including ours. Exactly why is a mystery. One possibility is that tidal forces from the Sun tugged Venus just the right way for it to slowly brake and reverse its spin.

What would it be like standing on the surface of Venus?

The Venusian atmosphere is dominated by a heavy layer made nearly entirely of carbon dioxide, with a couple percent of nitrogen, and a few other trace gases.

It's so thick, standing on its surface you'd experience a pressure similar to submerging yourself nearly 800 metres deep (about 2,550 feet) in water on Earth.

The generous amount of carbon dioxide also traps a significant amount of incoming heat from the Sun, pushing temperatures to an excess of 460 degrees Celsius (860 Fahrenheit).

At an altitude of around 60 to 80 kilometres (40 to 50 miles), hovers a thick blanket of cloud. While it's entire structure isn't clearly understood, the top-most section is believed to be a mist of sulfuric acid. In Venus' atmosphere, carbon dioxide is also broken down by sunlight into carbon monoxide above the cloud tops.

In 2020, astronomers discovered a significant abundance of the chemical phosphine high in Venus' atmosphere. On Earth, this chemical is produced by both geological and biological processes, but whether it aros from an organic process or a biological one remains unknown.

Structurally speaking, the surface of Venus resembles our own planet in a number of ways. It's a terrestrial (rocky) planet made of silicates and metals, with a radius of 6,052 kilometers (3,760 miles) - just a few hundred kilometres less than Earth's - and a similar density that gives it a gravity roughly 90 percent of our own world's. 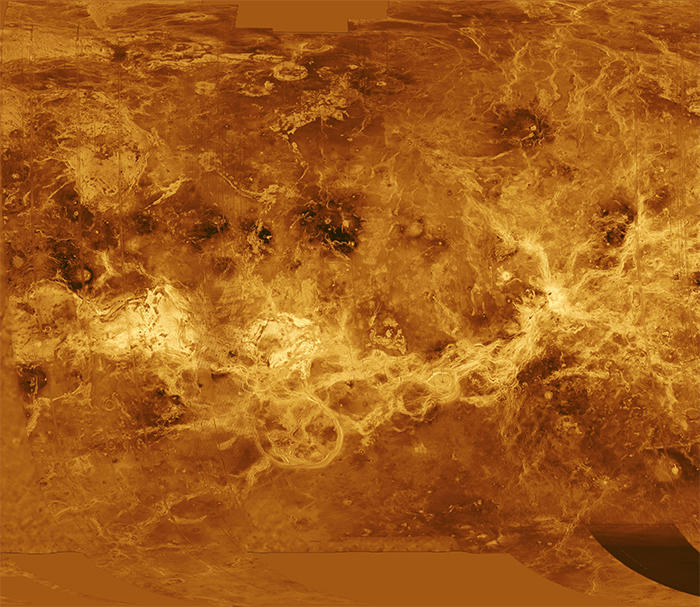 Venus beneath its clouds (NASA)

The planet's geology is also heavily textured by its history of volcanic activity, yet with marked differences that don't appear to resemble anything found here. Formations resembling vast spider-webs (dubbed arachnoids) sprawl across the landscape in some areas.

Some of these unusual features could boil down to another key difference between our two worlds. Unlike Earth, Venus has no plate tectonics. Without plate boundaries, its geological activity is concentrated differently to our own.

While Venus still appears to be volcanically active and is thought to have a sizable iron core, any dynamo effect produced by currents of molten mineral deep beneath its crust doesn't seem to be powerful enough to give Venus a self-generated magnetic field.

Just why Earth has a magnetic field, while Venus doesn't, is yet another curiosity to solve. One possibility is the collision that gave us a moon - something Venus lacks - churned up our planet's guts in a way that has left us with a swirling mess of magnetising currents.

Could we ever travel to Venus?

While Mars has attracted significant attention in the past, space exploration has seen its fair share of missions to our other neighbour.

Orbiting Venus is one thing. Getting a probe to land on the surface and survive long enough to send back some digital postcards is a challenge plagued by extreme heat, pressure, and corrosive elements.

In 1967, the Soviet probe Venera 4 not only became the first mission to survive a plunge into Venus's clouds, it was the first technology to directly analyse the atmosphere of another world.

Future missions to Venus would have to overcome similar obstacles, potentially relying on more robust (or even clockwork) technology. The risks could well be worth it to unravel the many remaining mysteries of one of our closest celestial neighbours.