Ram's horn shells are small, delicate spiral structures beachcombers commonly find throughout the world. Yet despite their ubiquity, the original owners of these shells are extremely elusive. Until now, we've never had footage of a single one in the wild.

In the twilight zone of our oceans, at the tips of sunlight's fingers, a remotely operated vehicle (ROV) has now delivered the first footage of a ram's horn squid (Spirula spirula) in its natural habitat.

This strange-looking cephalopod is a wee little thing barely 7 centimetres (under 3 inches) in length, with eight arms, two tentacles, a pair of bulging eyes, and a general muppet-like appearance. In its tail-end, hidden beneath its mantle, is a tightly-coiled internal shell equipped with chambers of gas that the animal manipulates for buoyancy.

At first, researchers operating the ROV at the Schmidt Ocean Institute had no idea what they were looking at.

"What on Earth?" a scientist can be heard exclaiming in the background of the video, which was shot live on the Great Barrier Reef at a depth of roughly 850 to 860 metres (2,790 ft).

Exciting news! This appears to be the FIRST observation of Spirula, aka ram's horn squid, alive + in its natural environment. Very rarely seen or captured, they have many extinct relatives, but are only living member of genus Spirula, family Spirulidae, and order Spirulida. 1/3 pic.twitter.com/re4rZyRuER

The rare sighting has since been shared online and confirmed to be the first footage of a live Spirula in the deep sea, the largest and least explored habitat on our planet. While there are numerous deep-sea species never before seen in their natural waters, this recent chance encounter has got scientists especially excited.

OMG! Ok, I don't want to get too excited...but according to several squid experts, this may be the FIRST VIDEO OF A LIVE RAM HORN SQUID! While these squid have many extinct relatives, they're the only ones left of thier kind & have a spiraling shell!
🎥@SchmidtOcean #DailyJelly pic.twitter.com/0Lv6ESvYNI

The ram's horn squid is rarely seen in the wild, and it's one of the most unusual cephalopods out there. Apart from cuttlefish, it's the only other known mollusc that contains an internal chambered shell to keep it buoyant. Yet unlike cuttlefish, this squid's skeleton is tightly coiled; molluscs in the Nautilus genus also have similarly-shaped shells, but they go on the outside of the animal.

"I've been looking for these for a long time," zoologist Michael Vecchione, who studies midwater squid at the Smithsonian National Museum of Natural History, told ScienceAlert. "I have no question at all it's a Spirula."

While Vecchione regularly catches this species from the deep, sometimes housing them in aquariums, he's never before seen footage of the squid in its natural habitat. Neither has Neige Pascal, who studies Spirula at the University of Burgundy in France. He told ScienceAlert the video is "very exciting". 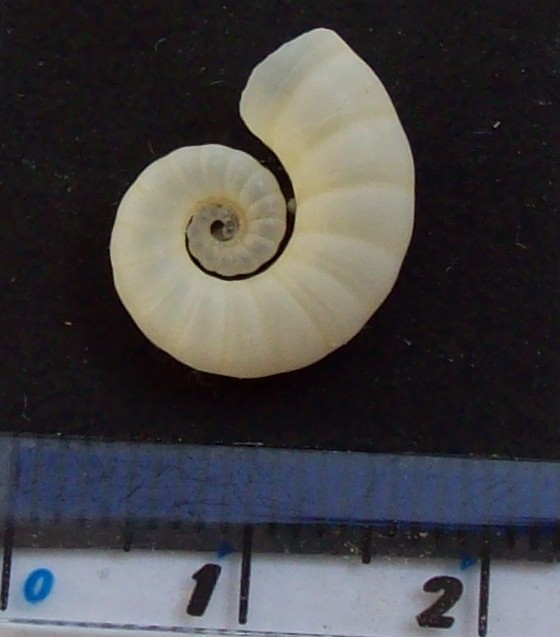 Apart from the sheer rarity of this encounter, there's one particularly surprising aspect of the footage: the very position of the animal, with its head and tentacles floating upright, and its fins pointing down.

"Are we completely sure about the orientation of the shoot? If this is the case, this is a king of revolution," Pascal told ScienceAlert.

Morgane Oudot, a PhD student of Pascal's and one of the few researchers in this field, agreed and said the video had her questioning everything she thought she knew about the ram's horn squid.

"A lot of people are freaking out because the head is up," adds Vecchione. "And the reason they're freaking out is because the shell with its buoyancy is at the other end of the squid. So you'd think the head, which is heavier, would be hanging down."

When put in an aquarium, this is actually how the squid orients. Its head with the arms and tentacles faces down and the end with the shell is up - so the species was thought to take the same position in the deep sea.

According to Vecchione, however, there's a problem with that assumption. Ram's horn squid also have a light-generating organ, known as a photophore, which is located near the buoyant shell. This means if Spirula are hanging with their head down, that light would be facing upwards, which is highly unusual for deep-sea animals.

In the twilight zone of our oceans, predators often have their eyes looking up in the hopes of glimpsing the silhouette of a possible meal. Hence, photophores help disguise prey in the deep sea by washing out their silhouettes with light. If the lamp is pointing upwards, that organ isn't nearly as useful.

There's a lot we still don't know about Spirula, including how the species reproduces and where it lays its eggs, but the way this squid orients itself in the water is one of the biggest questions for Vecchione. While he can't be sure it floats with its tentacles always facing upwards, he says the footage is good evidence the squid does this at least part of the time. We'll need more observations to solve that mystery.

And the curiosities don't end there. When the creature at last dashed away in the video, it looks as though a bit of ink spilled into the water; Vecchione is pretty sure that came from the squid - a possible diversion tactic for its escape.

"That's interesting because Spirula has the mechanism to make ink but it's reduced in this species, like other deep-sea species," Vecchione told ScienceAlert. "But this suggests it's functional and they're using it for defence."

It might be our first time spotting a ram's horn squid in its natural habitat, but it's also their first time in the face of a leering ROV. Fair enough if they wet themselves.