Researchers have known about the healing properties of collagen, which is the main structural protein found in the connective tissues of animals, for many years. Mammal collagen, especially from pigs and cows, has been extensively used for skin wound healing in hospitals all over the world. But the problem with mammal collagen is that it carries the risk of disease transmission, such as foot-and-mouth disease and bovine spongiform encephalopathy, plus many people can't receive it due to their religious beliefs.

But fish collagen? It's cheaper, safer, and there's a whole lot of it to go around.

Back in 2008, research showed that nanofibres made from collagen-rich, discarded fish scales had enough tensile strength to be used as a wound-dressing material, and when applied topically, encouraged the growth of skin cells. Containing around 70 percent collagen, fish skin is even better than fish scales, and is closer in form and structure to human skin, so a team of scientists from the Shanghai Jiaotong University School of Medicine in the US decided to test out its healing powers.

Using a series of processing and purification technologies, the team managed to extract pieces of high-quality collagen sponge from discarded tilapia skin. They first tested to see if it would provoke an immune response, which would be bad, because it means the body is rejecting it.

To find out, they mixed mouse spleen lymphocytes - a type of white blood cell - and mixed them with the tilapia collagen sponge. The contact did not cause the lymphocytes to proliferate, which means there was no immune response. "Furthermore, tilapia collagen encouraged the growth of fibroblasts and increased the expression of genes involved in wound healing," Alex B. Berezow reports at Real Clear Science. "Thus, these experiments indicated that tilapia collagen is well-suited for regenerative medicine."

Next, the researchers tested the strength of a wound dressing made from tilapia collagen and found that it was tough, and stable at temperatures up to around 300 degrees Celsius.

The final test was its actual wound-healing ability. Rats with 1.8-centimetre long wounds on their backs were treated with either the new fish collagen wound dressings, an algae-based wound dressing called Kaltostat, or nothing at all. You can see the results below: 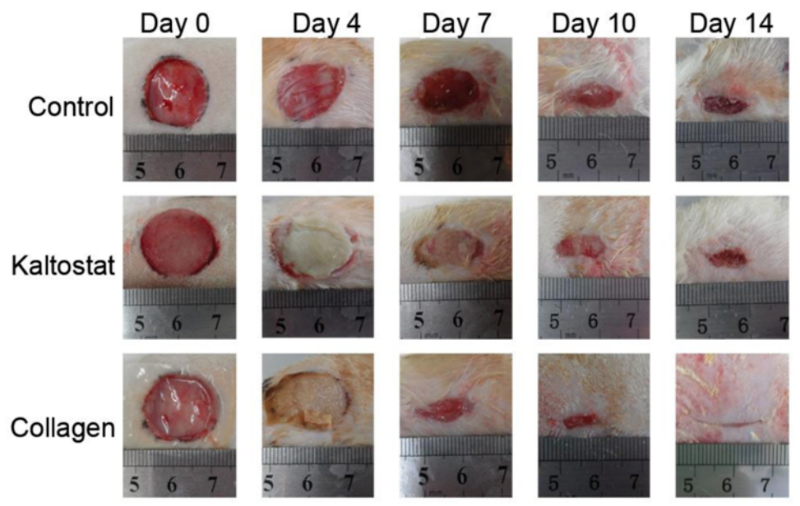 "Compared to the control groups, the wound-healing rate was significantly improved, crust started to disappear at day seven, and most of the wound area was covered with a continuous epidermis at day 14 in the collagen nanofibres group, while the skin wounds in the other two groups were not fully healed," the team reports in Applied Materials & Interfaces. "The histopathological results confirmed that the collagen nanofibres caused the lowest degree of inflammatory response and induced the best growth status of new epidermis throughout the process of wound healing."

The next step will be human trials, and turning it into a commercially viable product. But it won't be easy. "They will face a tough marketplace," says Berezow at Real Clear Science. "For instance, the company Eqalix, which uses a soybean protein to promote wound healing, has a head start of a few years. Currently, Eqalix is seeking FDA clearance for its product."

I hope they get there. What they're using is an abundant and cheap waste product, which is just sitting there waiting to be recycled. It's not clear if Eqalix is using discarded soybean parts, but if they're not, well, we really don't need another excuse to grow more of them.