This article was written by Mark Lorch from the University of Hull, and was originally published by The Conversation.

Did you know that the discovery of a way to make ammonia was the single most important reason for the world's population explosion from 1.6 billion in 1900 to 7 billion today? Or that polythene, the world's most common plastic, was accidentally invented twice?

The chances are you didn't, as chemistry tends to get overlooked compared to the other sciences. Not a single chemist made it into Science magazine's Top 50 Science stars on Twitter. Chemistry news just don't get the same coverage as the physics projects, even when the project was all about landing a chemistry lab on a comet.

So the Royal Society of Chemistry decided to look into what people really think of chemistry, chemists and chemicals. It turns out most people just don't have a good idea of what it is chemists do, or how chemistry contributes to the modern world. 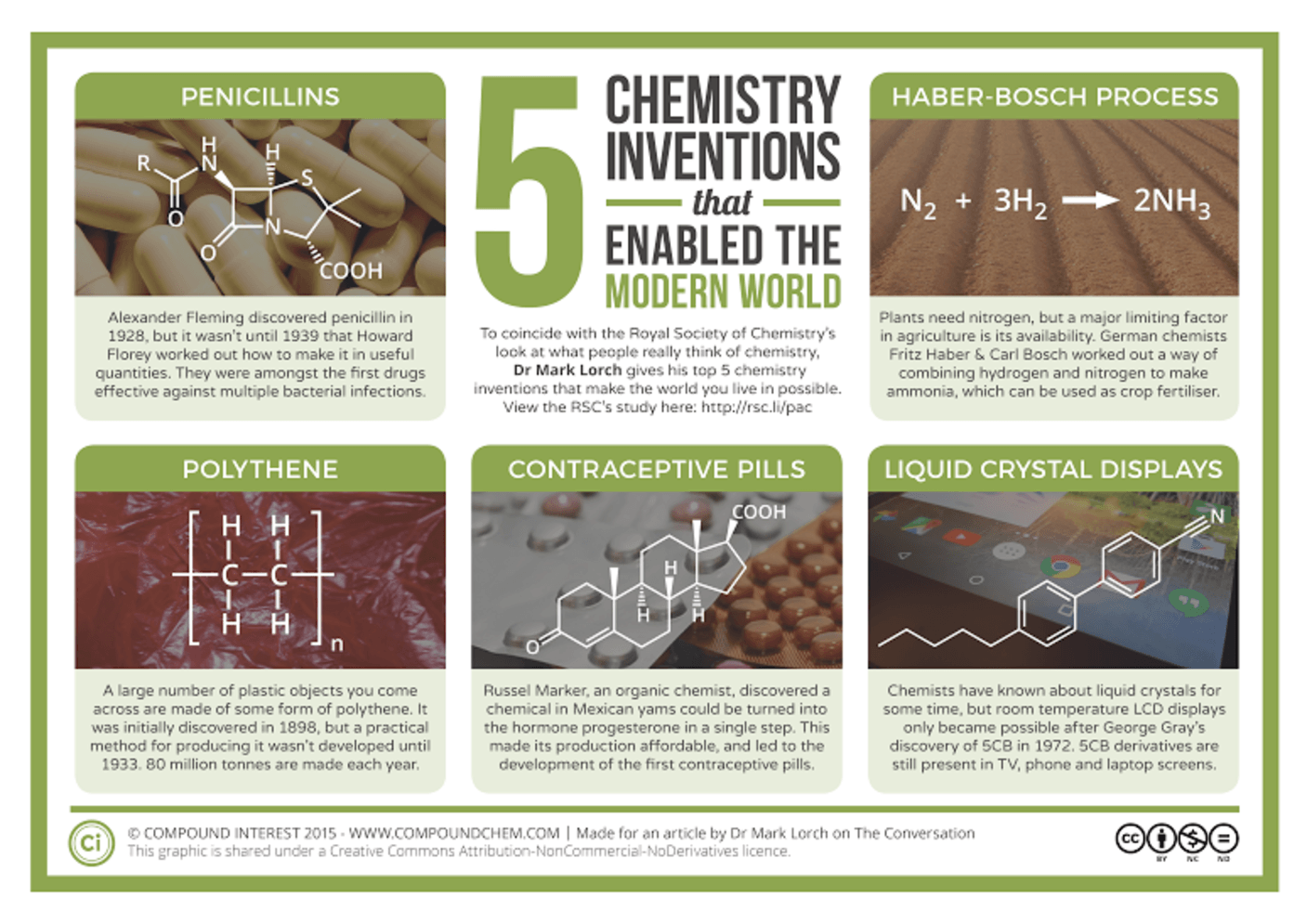 This is a real shame, because the world as we know it wouldn't exist without chemistry. Here's my top five chemistry inventions that make the world you live in. There's a good chance that penicillin has saved your life. Without it, a prick from a thorn or sore throat can easily turn fatal. Alexander Fleming generally gets the credit for penicillin when, in 1928, he famously observed how a mould growing on his petri dishes suppressed the growth of nearby bacteria. But, despite his best efforts, he failed to extract any usable penicillin. Fleming gave up and the story of penicillin took a 10-year hiatus. Until in 1939 it took Australian pharmacologist Howard Florey and his team of chemists to figure out a way of purifying penicillin in useable quantities.

However, as World War II was raging at the time, scientific equipment was in short supply. The team therefore cobbled together a totally functional penicillin production plant from from bath tubs, milk churns and book shelves. Not surprisingly the media were extremely excited about this new wonder drug, but Florey and his colleagues were rather shy of publicity. Instead Fleming took the limelight. Nitrogen plays a critical role in the biochemistry of every living thing. It is also the most common gas in our atmosphere. But nitrogen gas doesn't like reacting with very much, which means that plants and animals can't extract it from the air. Consequently a major limiting factor in agriculture has been the availability of nitrogen.

In 1910, German chemists Fritz Haber and Carl Bosch changed all this when they combined atmospheric nitrogen and hydrogen into ammonia. This in turn can be used as crop fertiliser, eventually filtering up the food chain to us.

Today about 80 percent of the nitrogen in our bodies comes from the Haber-Bosch process, making this single chemical reaction probably the most important factor in the population explosion of the past 100 years.

Most common plastic objects, from water pipes to food packaging and hardhats, are forms of polythene. The 80m tonnes of the stuff that is made each year is the result of two accidental discoveries.

The first occurred in 1898 when German chemist Hans von Pechmann, while investigating something quite different, noticed a waxy substance at the bottom of his tubes. Along with his colleagues he investigated and discovered that it was made up of very long molecular chains which they termed polymethylene. The method they used to make their plastic wasn't particularly practical, so much like the penicillin story, no progress was made for some considerable time.

Then in 1933 an entirely different method for making the plastic was discovered by chemists at, the now defunct chemical company, ICI. They were working on high-pressure reactions and noticed the same waxy substance as von Pechmann. At first they failed to reproduce the effect until they noticed that in the original reaction oxygen had leaked into the system. Two years later ICI had turned this serendipitous discovery into a practical method for producing the common plastic that's almost certainly within easy reach of you now.

4. The Pill and the Mexican yam

In the 1930s physicians understood the potential for hormone-based therapies to treat cancers, menstrual disorders and of course, for contraception. But research and treatments were held back by massively time-consuming and inefficient methods for synthesising hormones. Back then progesterone cost the equivalent (in today's prices) of $1,000 per gram while now the same amount can be bought for just a few dollars. Russel Marker, a professor of organic chemistry at Pennsylvania State University, slashed the costs of producing progesterone by discovering a simple shortcut in the synthetic pathway. He went scavenging for plants with progesterone-like molecules and stumbled upon a Mexican yam. From this root vegetable he isolated a compound that took one simple step to convert into progesterone for the first contraceptive pill.

5. The screen you are reading on

Incredibly, plans for a flat-screen colour displays date back to the late 1960s! When the British Ministry of Defence decided it wanted flat-screens to replace bulky and expensive cathode ray tubes in its military vehicles. It settled on an idea based on liquid crystals. It was already known that liquid crystal displays (LCDs) were possible, the problem was that they only really worked at high temperatures. So not much good unless you are sitting in an oven.

In 1970 the MoD commissioned George Gray at the University of Hull to work on a way to make LCDs function at more pleasant (and useful) temperatures. He did just that when he invented a molecule known as 5CB). By the late 1970s and early 1980s, 90 percent of the LCD devices in the world contained 5CB and you'll still find it in the likes of cheap watches and calculator. Meanwhile derivates of 5CB make the phones, computers and TVs possible.

Mark Lorch is Senior Lecturer in Biological Chemistry at University of Hull. This article was originally published on The Conversation. Read the original article.