For The First Time, Mac Users Have to Worry About Malware That Locks Their Computer And Demands a Ransom

Ransomware, a type of malware that encrypts all the data on your computer until you pay the attackers a ransom (often in bitcoins), has been a big problem for Windows users for years.

While there have been previous reports of Mac users attacked by ransomware, such as an attack back in 2013; in that case, the attack was more or less faked.

Attackers were able to embed a little bit of code in the browser that made it look like the Mac (or Windows) machine was locked and encrypted when only the browser was affected, reported security researchers at Malwarebytes.

But it seemed only a matter of time before Macs would get their own ransomware. Security researchers have been writing more and more proof-of-concept Mac ransomware and a few successful attempts were shared by at least two different researchers last fall.

The idea of proving and sharing such code is to allow Apple and others to fix the holes that would let real hackers get in.

The good news is that Apple may have developed a fix to stop this particular ransomware attack. The malware appears to have snuck into an app called Transmission, a way for people to share movies and other content via sharing tech called BitTorrent. Apple has come up with a way to block Macs from installing the infected version of the app.

The Transmission website carries a warning telling people to upgrade to a new version of the app immediately, and offers instructions to check if your Mac was infected.

While this may be the end of ransomware for Macs, given the rise in popularity of Macs, particularly in businesses and other targets with deep pockets, this also might be just the beginning. 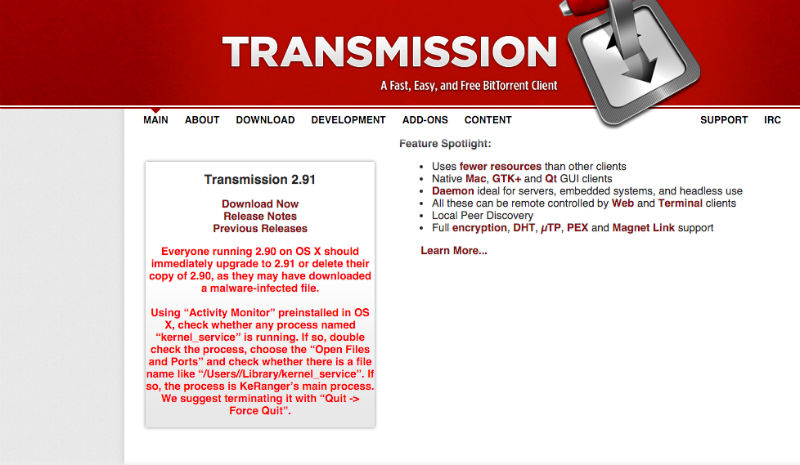