It’s the stuff of Chemistry 101: carbon can only form four bonds because it only has four shareable electrons.

But this rule no longer applies, because scientists have confirmed the existence of an exotic carbon molecule that can form six bonds, meaning the most classic example of tetravalence in our high school chemistry textbooks now comes with a hefty caveat.

If all of this is kinda giving you conniptions, we’re right there with you.

Because while "Tear up your textbooks!" is a phrase that gets thrown around a lot these days, this is one situation where the scientific reality is far more complex than we’ve been led to believe in chemistry class.

"It’s super important that people realise that although we’re taught carbon can only have four friends, carbon can be associated with more than four atoms," chemist Dean Tantillo from the University of California, Davis, who wasn’t part of the study, told Science News.

So here’s what happened.

Back in the 1973, German researchers proposed that it could be theoretically possible to create a carbon molecule with six bonds, using hexamethylbenzene.

Also known as mellitene, this hydrocarbon compound forms when carbon bonds with hydrogen like this: 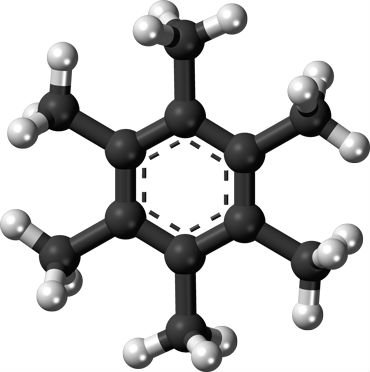 In a typical bond, two electrons are shared - one from each of atom. The leftover electrons that haven't been shared in this compound stay in the middle of the hexagonal ring to strengthen the existing bonds, as depicted by the dotted lines above.

But the German researchers asked the question: what happens if the hexamethylbenzene molecule happens to lose two electrons?

They proposed that this would force the molecule into a far less stable, positively charged version of itself, that basically collapses into a pyramid shape, as you can see in the image below: 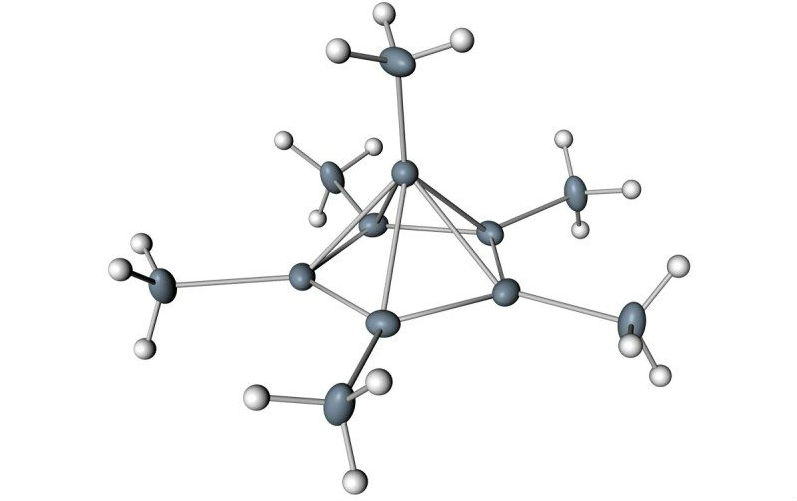 "In this arrangement, there are six electrons available to connect the top of the pyramid to the five carbons in the rest of the ring and the extra arm, Rebecca Boyle reports for New Scientist.

"But no one double-checked the molecule’s shape, until now."

A team led by chemist Moritz Malischewski from the Free University of Berlin, Germany decided to try and synthesise a hexamethylbenzene molecule to confirm its structure.

The reason it's taken so long for someone to attempt this is that the compound is only stable when created in extremely potent acid, so you have to really know what you're doing if you want to mess around with hexamethylbenzene.

As soon as the compound had crystallised, the team blasted it with X-rays to create a 3D model of its structure.

Sure enough, they found that two electrons had been pushed out of the structure, and that changed things up dramatically on the inside.

"One carbon atom jumped out of the ring and took a new position on top, turning the flat hexagonal ring into a five-sided carbon pyramid," Laurel Hamers reports for Science News.

"And the carbon on top of the pyramid was indeed bonded to six other carbons - five in the ring below, and one above."

Something to keep in mind is that not all bonds are created equal, because while the molecule really does host six carbon bonds, they're nowhere near as strong or stable as the four-way bonds that make up the majority of the compound.

"The carbon isn’t making six bonds in the sense that we usually think of a carbon-carbon bond as a two-electron bond," Tantillo told Hamers, because fewer electrons have to be shared between the six bonds.

Confirmation of this 40-year-old hypothesis means that we now know for sure that carbon bonding is far more complex than we've been giving it credit for, and there's the possibility of even stranger molecular structures on the cards.

And, as Malischewski told New Scientist, it's not every day that you get to shock even the most established chemists in the field: "It is all about the challenge, and the possibility to astonish chemists about what can be possible."

The study has been published in Angewandte Chemie.