Researchers working in Ethiopia have unearthed the oldest human fossil ever, and the discovery could push back the origin of the Homo genus by half a million years.

The lower jaw fossil has been described in two simultaneous papers published in Science today (here and here), and is helping to shed some light on the mysterious origin of our human family in eastern Africa. The fossil, which was first found in 2013, has been dated to around 2.8 million years old, at least 400,000 years older than any previous Homo fossil.

"There is a big gap in the fossil record between about 2.5 million and 3 million years ago - there's virtually nothing relating to the ancestors of Homo from that time period, in spite of a lot of people looking," co-author of the study Brian Villmoare from the University of Nevada, Las Vegas told Charles Q. Choi from Live Science. "Now we have a fossil of Homo from this time, the earliest evidence of Homo yet."

Excitingly, the fossil was found extremely close to the last known remnants of Australopithecus afarensis, a hominid species that many researchers believe was the direct ancestor of the Homo genus. A. afarensis is best known from the skeleton, Lucy.

Only around 200,000 years separate the remains of Lucy and the newly discovered Homo jaw bone, known as LD 350-1, and it helps to paint a clearer picture than we've ever had before about our heritage.

The researchers aren't sure as yet if the new jaw bone belongs to a new species, or to a known, extinct human species, such as Homo habilis. The morphology of the bone seems to suggest that it was an intermediay species, with the tell-tale teeth cusp patterns and jaw proportions of a Homo species, but the sloping chin of Australopithecus.

"This narrows the time period in which we can now focus our search for the emergence of the human lineage," Bill Kimbel, director of the Institute of Human Origins at Arizona State University in the US, told Shreeve. "It's very much a transitional form, as would be expected at that age. The chin looks backwards in time. But the shape of the teeth looks forward."

The National Geographic team has created a really useful illustration below showing where the new jawbone, LD 350-1, fits in our family tree. 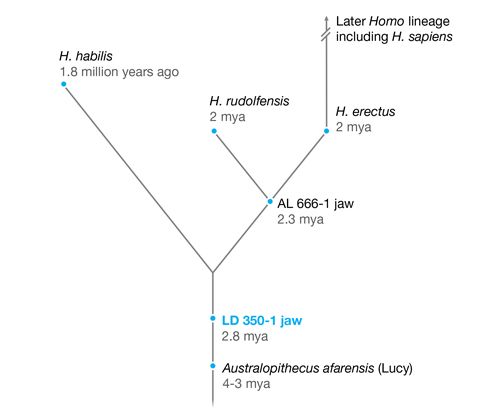 The researchers were able to date the fossil by analysing the radioactive isotopes in layers of volcanic ash above and below it, Villmoare told Choi. "This find helps place the evolution of Homo geographically and temporally - it tells us where and when Homo evolved," he added.

On its own, the find is exciting enough, but another paper was also published in Nature today, which suggests that an important Homo habilis fossil, which is currently believed to be the oldest known Homo species, had an unexpected mix of primitive and advanced traits. This makes it a potential match for the new LD 350-1 fossil.

"These findings raise more questions than they answer," Villmoare told Choi. "Hopefully these questions will be answered by further fieldwork."