If creepy crawlies make you uncomfortable, be glad you weren't living in the Carboniferous period (around 100 million years before the dinosaurs arrived) in what is now Northumberland in the UK.

Scientists have made an astonishing discovery along this part of the coast of northeast England: a 326 million-year-old fossil, showing traces of the largest millipede ever discovered. It's estimated to have been some 2.7 meters (nearly 9 feet) long – so we're talking about the length of a car.

The remains are from the now-extinct Arthropleura genus of arthropod millipedes, and elevate this class of creature to be the largest-known invertebrate of all time. The discovery, originally made in 2018, was a chance one however.

"It was a complete fluke of a discovery," says Earth scientist Neil Davies, from the University of Cambridge in the UK. "The way the boulder had fallen, it had cracked open and perfectly exposed the fossil, which one of our former PhD students happened to spot when walking by."

"It was an incredibly exciting find, but the fossil is so large it took four of us to carry it up the cliff face." 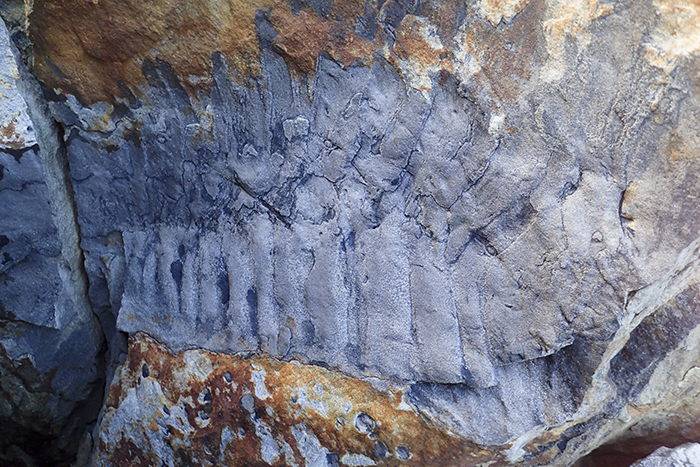 The segments are clearly visible in the stone. (Neil Davies)

The recovered section of fossil measures 75 centimeters (nearly 30 inches), though the actual millipede would have been much bigger. The team estimates it could have weighed around 50 kilograms (110 pounds).

As well as being a record breaker, the fossil is teaching experts more about ancient millipedes. In the Carboniferous Period, the UK would have been close to the equator, matching previous Arthropleura findings. However, the type of location – an open woodland habitat near the coast – is different.

The only two previous Arthropleura fossils of this type discovered to date were found in Germany and were smaller in size. These earlier findings also suggested the invertebrates tended to live around coal swamps – extensive areas of vast amounts of biomass that built-up as peat as it died, eventually turning into coal. 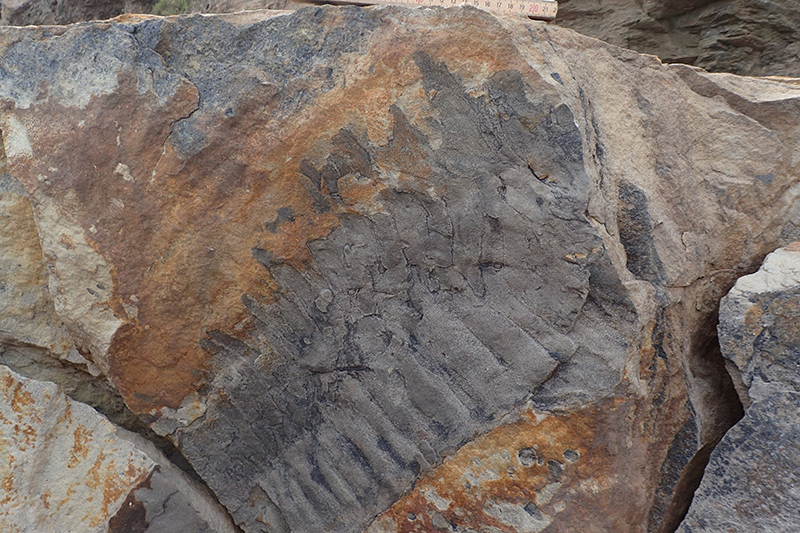 It is generally accepted that arthropods (the group that includes insects and millipedes) today can't physically get this big, as oxygen levels aren't high enough to facilitate their method of breathing at larger sizes.

However, this fossil dates from before the atmospheric oxygen peak of the late Carboniferous and Permian periods, when the concentration of oxygen in the atmosphere was only 23 percent, not much higher than today's 21 percent. This indicates a rise in oxygen can't be the only factor that allows arthropods to reach such incredible sizes.

The researchers attribute Arthropleura's size to a diet high in nutrients and lack of predators.

"While we can't know for sure what they ate, there were plenty of nutritious nuts and seeds available in the leaf litter at the time, and they may even have been predators that fed off other invertebrates and even small vertebrates such as amphibians," says Davies.

Arthropleura animals lived around the equator for approximately 45 million years, going extinct during the Permian (299-252 million years ago). The reason for that extinction isn't clear – it may have in part been due to the rise in reptiles who eventually outcompeted them – but we're kind of glad they're not still crawling around the place.

The fossil was discovered in sandstone fallen from a cliff, and would have originally been in a river channel. It represents what's likely to be a molted section of Arthropleura exoskeleton, which was eventually filled with sand that then preserved it.

As the paucity of giant Arthropleura fossils shows, this kind of preservation is very rare – and every new discovery can teach us a lot more about how these ancient creatures lived and evolved.

"Finding these giant millipede fossils is rare, because once they died, their bodies tend to disarticulate, so it's likely that the fossil is a molted carapace that the animal shed as it grew," says Davies.

"We have not yet found a fossilized head, so it's difficult to know everything about them."

The research has been published in the Journal of the Geological Society.