American life expectancy at birth declined for the second consecutive year in 2016, fueled by a staggering 21 percent rise in the death rate from drug overdoses, the Centers for Disease Control and Prevention reported Thursday.

The United States has not seen two years of declining life expectancy since 1962 and 1963, when influenza caused an inordinate number of deaths. In 1993, there was a one-year drop during the worst of the AIDS epidemic.

"I think we should take it very seriously," said Bob Anderson, chief of the Mortality Statistics Branch at the National Center for Health Statistics, which is part of the CDC.

"If you look at the other developed countries in the world, they're not seeing this kind of thing. Life expectancy is going up."

The development is a dismal sign for the United States, which boasts some of the world's highest spending on medical care, and more evidence of the toll the nation's opioid crisis is exacting on younger and middle-aged Americans, experts said.

More than 42,000 Americans died of opioid overdoses alone in 2016, a 28 percent increase over 2015. When deaths from drugs such as cocaine, methamphetamine and benzodiazepines are included, the overall increase was 21 percent.

A multiyear decline in life expectancy is more commonly associated with AIDS epidemics in southern and eastern Africa or wars in Syria and Afghanistan, said Majid Ezzati, a professor of public health at Imperial College London who has studied life expectancy.

"The story does come down to young people," he said. "It's the overdose story, to a large extent."

The data a year ago set off alarms when they showed that in 2015 the United States experienced its first decline in life expectancy since that 1993 dip. Experts pointed then to the "diseases of despair" - drug overdoses, suicides and alcoholism - as well as small increases in deaths from heart disease, strokes and diabetes.

The 2016 data shows that just three major causes of death are responsible: unintentional injuries, Alzheimer's disease and suicides, with the bulk of the difference attributable to the 63,632 people who died of overdoses. 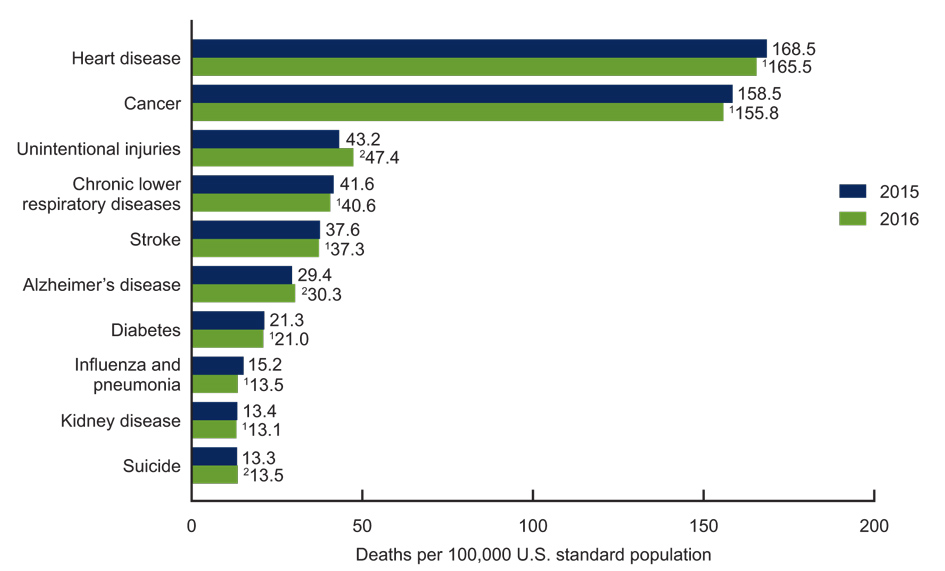 Deaths from fentanyl and other synthetic opioids more than doubled from the previous year. Heroin and prescription opioid overdose deaths also rose, but more modestly.

At the same time, a long decline in deaths from heart disease continued a six-year trend of leveling out, Anderson said.

The small decrease last year in the rate of the nation's leading cause of death no longer canceled the drug epidemic's impact on life expectancy, Anderson said.

"The key factor is the increase in drug overdose deaths," he said.

The number of people who fatally overdosed on fentanyl and other synthetic opiates soared from 9,580 in 2015 to 19,413 in 2016. Deaths due to heroin were up nearly 20 percent, and deaths from other opioid painkillers such as hydrocodone and oxycodone were up 14 percent.

"It's even worse than it looks," said Keith Humphreys, an addiction specialist at Stanford University.

Given that research has shown official figures could be undercounting the true number of opioid deaths by 20 percent or more, "we could easily be at 50,000 opioid deaths last year," he said.

"This means that even if you ignored deaths from all other drugs, the opioid epidemic alone is deadlier than the AIDS epidemic at its peak."

And while only limited provisional data is available for 2017, things don't look any better.

While drug mortality has been increasing among all age groups since 1999, it's highest among those ages 25 to 54.

"This is no longer an opioid crisis," said Patrick Kennedy, a former Rhode Island congressman who was a member of President Trump's Commission on Combating Drug Addiction and the Opioid Crisis.

"This is a moral crisis . . . we know how to answer this problem, but we can't get around our own prejudices."

But there is "a bias in recovery circles" against such treatments, with the attitude that "you're not supposed to take medications - that's not called sobriety," he said.

On July 31, the commission recommended Trump declare the crisis a national emergency, a designation that could have made emergency funding available. Instead, the president in October declared a public health emergency; he has since devoted little additional resources to the problem.

"He gave a fantastic speech," Kennedy said of Trump.

"But so far he's all talk and no follow-through." The political dithering cost 174 deaths a day from drug overdoses in 2016 - one every 8½ minutes, he said.

The 10 leading causes of death accounted for roughly three-fourths of the 2.7 million deaths last year.

The 9.7 percent jump in unintentional injuries, which includes drug overdoses, motor vehicle crashes and other kinds of accidents, pushed that category into third place overall among causes of death.

Last year, some experts attributed the rising toll of Alzheimer's disease to more frequent reporting of it. But Anderson said a second year of substantial increases probably indicates that more people are dying of the disease.

"As people avoid [cancer and heart disease], they're going to survive long enough to die of Alzheimer's," he said.

The report also noted a small but statistically insignificant decline in infant mortality.