As someone who has just gotten into their first MMO, only to clock an unseemly amount of hours within the first few months, I'm no stranger to the guilt that can come from habitual gaming. But the good news is there's mounting evidence that the hobby can have a range of beneficial effects on your brain, including improved cognitive control, emotional regulation, spatial resolution of vision, hand-eye motor coordination, and contrast sensitivity.

Adding to this is a new study by Australian and Chinese researchers, which suggests that not only does regularly playing action video games increase the amount of grey matter in a person's brain - the part responsible for muscle control and sensory perception skills such as seeing and hearing; memory function; and emotion, speech, decision formation - but it also promotes better connectivity in certain subregions of the brain associated with these functions.

The team, led by researchers from the University of Electronic Science and Technology of China and Macquarie University in Sydney, used functional MRI (fMRI) scans to analyse the brains of 27 gamers who have achieved professional, or 'expert', levels of playing action video games (AVG), having won regional and national championships in League of Legends or DOTA2. The team compared the scans of these expert gamers' brains with the brain activity of people who don't usually play these types of games (casul confirmed).

The fMRI scans focussed on the brain's insular cortex region, which is thought to be associated with 'higher' cognitive functions that are often only seen in humans and great apes, such as language processing, empathy, and compassion. It's also associated with the ability to focus attention on a task, and motor control tasks such as hand-and-eye motor movement, swallowing, gastric motility, and speech articulation.

The figure below reveals what they found - heightened connectivity between certain subregions in the insulur cortex, and increased thickness, surface area, and volume of grey matter. Alex B. Berezow explains the results over at Real Clear Science: 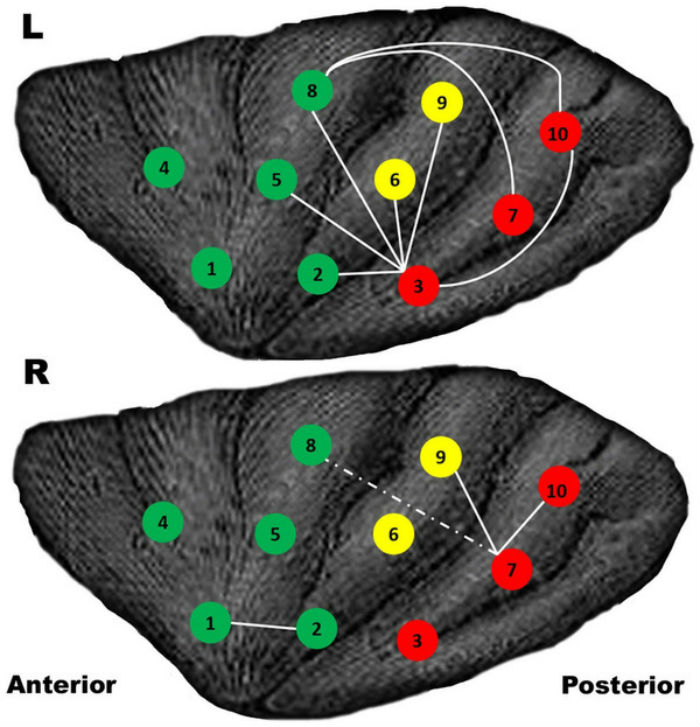 Looking at this, the researchers suggest that making a habit out of playing video games can actively increase a person's grey matter volume and connectivity between networks in certain regions of the brain.

"By comparing AVG experts and amateurs, we found that AVG experts had enhanced functional connectivity and grey matter volume in insular subregions," the team writes in Scientific Reports. "Furthermore, AVG experts exhibited increased functional connectivity between the attentional and sensorimotor networks, and the experience-related enhancement was predominantly evident in the left insula, an understudied brain area. Thus, AVG playing may enhance functional integration of insular subregions and the pertinent networks therein."

Now, this doesn't mean everyone should take up intensive gaming in order to develop a better brain - other types of repetitive, skill-based tasks such as sports, painting, and driving, will likely have similar effects. And the results would be more conclusive if taken over an extended period of time, so evidence of connectivity and grey matter growth could be seen. But it's nice to know that gaming isn't necessarily making you dumb, or eating up your brain. In fact, it could actually make you learn faster. My cat lady battle mage would be so pleased.