A blind man who lost his sight to a neurodegenerative eye disease decades ago has had his vision partially restored, thanks to a first-of-its-kind experimental gene therapy.

The patient in question, a 58-year-old male, was diagnosed 40 years ago with retinitis pigmentosa: a progressive, inherited group of genetic disorders that leads to loss of vision due to mutations that cause light-sensitive photoreceptor cells in the retina to break down.

Retinitis pigmentosa (RP) is generally considered a rare disorder, with estimates suggesting only one in 4,000 people have the condition, but it's nonetheless thought to affect approximately 2 million people worldwide.

For those people and their families, recent advancements in optogenetics could be a source of new hope for restored vision – although it's worth emphasizing this approach is still very much in the experimental stage, with practical treatments likely to be years away. 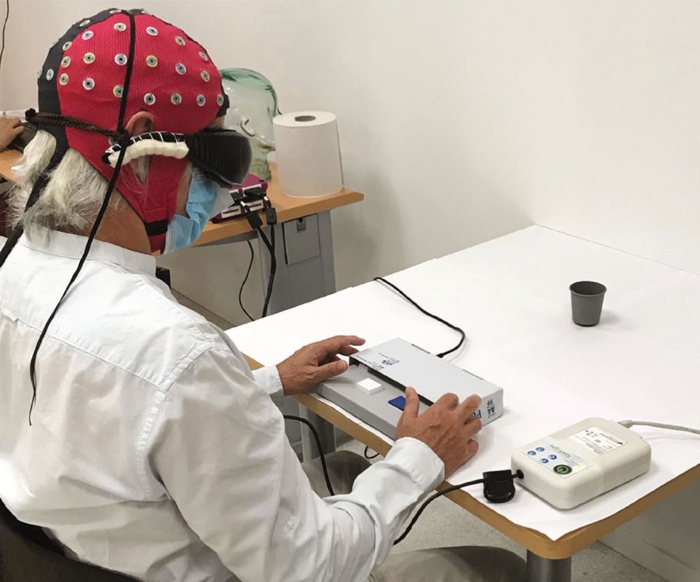 In the 58-year-old patient in question, degradation in his sight due to RP meant his visual acuity was limited to light perception: He could still perceive the presence of light and differentiate it from darkness, but couldn't make out anything else.

At least, not without assistance. As part of the PIONEER clinical trial, the man was actually able to partially see again with one of his eyes, due to a combination of gene therapy and pulses of light stimulating the eye, courtesy of special goggles.

The technique is called optogenetic vision restoration, although this represents the first time it's been used to deliver partial functional recovery in a neurodegenerative disease, the researchers say.

"We present the first evidence that injection of an optogenetic sensor-expressing gene therapy vector combined with the wearing of light-stimulating goggles can partially restore visual function in a patient with RP who had a visual acuity of only light perception," the team, led by ophthalmologist José-Alain Sahel from the University of Pittsburgh, explains in a new paper.

In the study, the man was given an intravitreal injection in his worst-seeing eye, delivering an adeno-associated virus – a form of gene therapy where the viral vector infects human tissue with a beneficial payload.

In conjunction with the special goggles – which stimulated his eye with bursts of light that corresponded to the shape and position of objects in front of him – the man was able to partially see once more.

"The light-stimulating goggles capture images from the visual world using a neuromorphic camera that detects changes in intensity, pixel by pixel, as distinct events," the researchers explain.

"The goggles then transform the events into monochromatic images and project them in real time as local 595-nm light pulses onto the retina."

With the aid of this experimental setup, the patient – who was previously unable to visually detect anything in front of him – was able to successfully perceive, locate, and touch various objects that had been placed on a table in front of him, including a notebook, a staple box, and a tumbler.

"The visual process leading to the percept was effective enough to enable the patient to orient toward the object and perform the visuomotor task of reaching for it," the researchers explain.

At the same time, the man wore a non-invasive electroencephalographic (EEG) cap, designed to provide a readout of neuronal activity across the cortex during the experiment, providing another measure of the man's partially restored vision.

"The EEG recordings suggested that retinal activity evoked by the optogenetic stimulation of the retina propagates to the primary visual cortex and modulates its activity," the authors write.

"This cortical activity, quantified as changes in amplitude of the local EEG alpha power, conveys sufficient information to allow object versus no-object stimulations to be decoded on a single-trial basis."

While there's a lot more research to be done before this kind of therapy can be administered to regular patients, the signs here are very promising, giving hope that optogenetic treatments using light-stimulation optic devices could one day restore at least some level of vision for blind patients with retinitis pigmentosa.

In one test, the man was also able to identify and count the number of white stripes on the crosswalk outside of the laboratory. When wearing the goggles after the tests, he reported being able to see other objects outside of the lab.

"Subsequently, the patient testified to a major improvement in daily visual activities, such as detecting a plate, mug or phone, finding a piece of furniture in a room or detecting a door in a corridor but only when using the goggles," the researchers write.

"Thus, treatment by the combination of an optogenetic vector with light-stimulating goggles led to a level of visual recovery in this patient that was likely to be of meaningful benefit in daily life."