A revolution in genomics is creeping into economics. It allows us to say something we might have suspected, but could never confirm: money trumps genes.

Using one new, genome-based measure, economists found genetic endowments are distributed almost equally among children in low-income and high-income families. Success is not.

First, consider the people whose genome scores in the top quarter on a genetic index the researchers associated with educational achievement.

Only about 24 percent of people born to low-income fathers in that high-potential group graduate from college.

That's dwarfed by the 63 percent college graduation rate of people with similar genetic scores who are lucky enough to be born to high-income fathers.

The application of genetics to economics is in its infancy. Limitations abound. Most notably, researchers are forced to focus on white people. The world's genomic data comes overwhelmingly from people of European descent, and genetic comparisons across races can produce bizarre results.

But it can already begin to expose truths about the economy. The figures above come from a new, genome-based study of economic data which aims straight at the heart of the popular conception of America as a meritocracy.

"It goes against the narrative that there are substantial genetic differences between people who are born into wealthy households and those born into poverty," said Kevin Thom, a New York University economist and author of a related working paper released recently by the National Bureau of Economic Research.

"If you don't have the family resources, even the bright kids - the kids who are naturally gifted - are going to have to face uphill battles," Thom said. 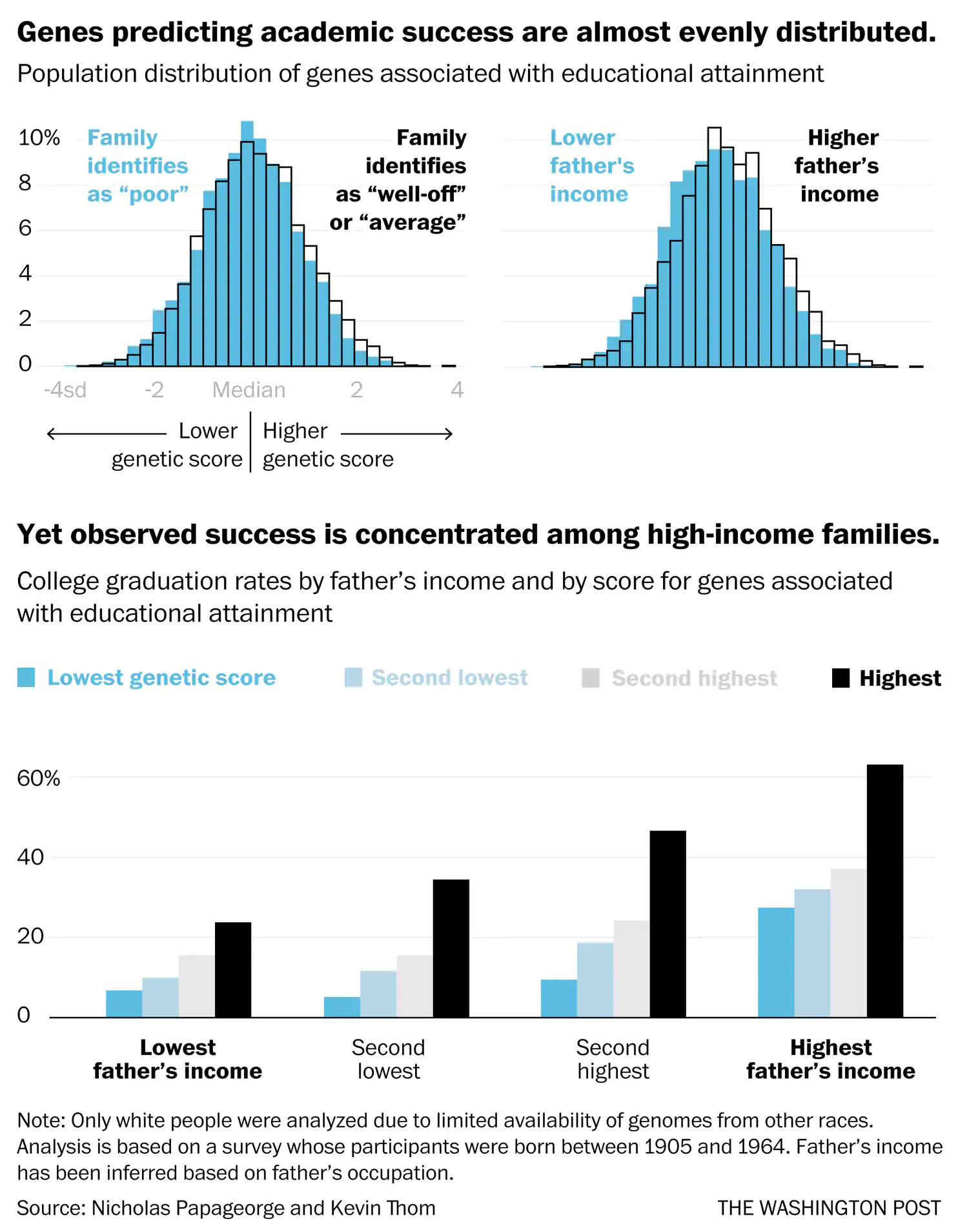 "Their potential is being wasted. And that's not good for them, but that's also not good for the economy," his collaborator, Johns Hopkins economist Nicholas Papageorge said.

"All those people who didn't go to college who had those high genetic scores, could they have cured cancer?"

Thom and Papageorge's analysis builds on the findings of one of the biggest genome-wide studies yet conducted. Published by a separate team of a dozen authors in Nature Genetics in July, it's the latest result of a lengthy, ongoing effort to bring genetic analysis to the social sciences.

The Nature Genetics team scanned millions of individual base pairs across 1,131,881 individual genomes for evidence of correlations between genes and years of schooling completed. They synthesized the findings into a single score we can use to predict educational attainment based on genetic factors.

Thom and Papageorge studied the team's index after it was calculated for a long-running retirement survey sponsored by the Social Security Administration and the National Institute on Aging.

About 20,000 of the survey's respondents, born between 1905 and 1964, provided their DNA along with their responses, which allowed the economists to attach genetic scores individuals' academic and economic achievements.

You already know their key finding, that being born rich trumps being born gifted. But that simple finding becomes more interesting as you come to understand what makes it unique, what it represents and the important ways in which it remains limited.

Studies fueled by huge genetic data sets likely won't upend economics like they did the biological sciences, but they do allow economists to do something new: control for the environments that people grow up in.

Previous attempts to separate academic potential from the advantages given to children of wealthy families relied on measures such as IQ tests, which are biased by parents' education, occupation and income.

Such tests can't be administered at conception, birth or infancy - before high-income parents have given their young children a head start by feeding them well, reading to them at higher rates and enrolling them in more activities.

"Two people who are genetically similar can have strikingly different IQ test scores because the richer ones have invested more in their kids," Papageorge said.

When you look at the raw genetic potential of the two people, though, "you see they're actually quite similar."

The analysis doesn't hinge on a "smart gene." Such a thing doesn't exist. Genes interact in mysterious ways.

Rather than linking individual lines of genetic code to specific characteristics, scientists seek correlations along the 10 million or so steps on the double-helix ladder which explain most human diversity. They focus not on what each base pair might do, but what they might explain in the aggregate.

Geneticists, who had focused on biological attributes with clear genetic connections, were initially skeptical that an outcome as complex as education could be connected to a genetic index, Thom said. But outside tests have consistently proven the score can predict college graduation rates.

Some of the individual genetic encodings influence traits including fetal brain development and lifelong neurotransmitter secretion.

Each has an infinitesimal impact on an individual's achievement. Taken together, they explain 11-13 percent of the difference in academic achievement between people.

That variation is useless if you just want to use your kid's 23andMe data to determine whether she'll get the PhD that you never did. But combined with a large population, it allows researchers to do things that, just a few years ago, seemed like Hocus Pocus.

"We are just starting to enter an era where researchers are finding for the first time really credible linkages between genetic markers and social science outcomes," Thom said.

Thom was drawn into the emerging field when colleagues got him interested in genetic markers that offered a biological measure of elevated smoking risk.

"Once I got in there, it's clear that there are all kinds of questions" we could answer with genetic analysis, Thom said.

The techniques Thom and Papageorge used can't yet be widely applied. Unlike the retirement survey they used, most economic data doesn't have a genetic component. Major economic surveys like those behind the unemployment rate aren't distributed with little saliva collection kits for genome sequencing.

And their work has limitations, in addition to being limited to white people for now. The genetic scores they used are hard to separate from their environment.

They reflect the genes that were most successful when and where those individuals were growing up. And behavior that led to academic success decades ago may not be so useful when pedagogy evolves.

When the genetic index Thom and Papageorge used was tested among genomes from siblings, the results indicated as much as a quarter of the variation in score could be due to genetic code that correlates with environmental factors.

There may be genes associated with parenting behavior that creates an environment conducive to your child's success. Children with that gene would tend to succeed in school not because that gene directly helped them study, but because they received both the gene and a success-friendly environment from their parents.

It's a reminder that the study's key finding is also its key caveat: genes aren't destiny. Most achievement can't be explained by genetic factors. Environmental factors like parents' income, on the other hand?