This is not the actual penguin (polarman/Shutterstock)
NATURE

A new species of prehistoric penguin has been found in New Zealand, and it's so big that the researcher who found its bones initially couldn't figure out what kind of animal it was.

It's one of the biggest penguins that ever existed, coming in at just under the size of extinct Late Eocene Antarctic penguin Palaeeudyptes klekowskii, which was 2 metres long and weighed 115 kilograms.

But although it's not breaking size records, K. biceae is the earliest giant penguin ever discovered, according to Te Papa Museum curator Alan Tennyson, who found the first piece of the skeleton in 2004.

Other giant penguin fossils date back to around 42-35 million years ago, placing them in the Eocene epoch.

And the two species of the earlier Waimanu genus of penguin that emerged not long after the Cretaceous-Paleocene extinction event are much smaller, and show signs of being closer to losing the ability to fly.

"That a penguin rivaling the largest previously known fossil species existed in the Paleocene may indicate that gigantism in penguins arose shortly after these birds became flightless divers," the researchers wrote in their paper.

"Gigantism therefore may be an inherent feature of Paleogene penguins, which may have evolved soon after aerodynamic constraints ceased to exist."

Tennyson found the fossilised remains encased in a boulder on a beach in Otago, New Zealand. Initially, he didn't know what the bones were.

He found a rock that showed bone on the outside surface, so he took it back to his office - where it would remain on a shelf for a few years.

Extraction on the boulder didn't start until 2015 - but once work began, the researchers realised they had found the bones of a bird. A really big bird.

"Painstaking extraction work slowly revealed that the rock contained a multitude of jumbled bones of a colossal penguin," Tennyson said.

"We found flipper, body and leg bones and they are truly huge." 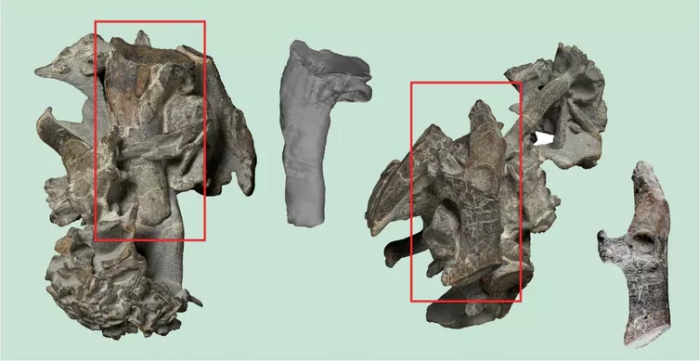 The new penguin was named Kumimanu, which means "monster bird" in Māori, and biceae in honour of Tennyson's mum, Bice Tennyson.

It's difficult to know how similar K. biceae looked to modern day penguins, the tallest of which is the emperor penguin that stands at 1.1 metres. But it was probably a formidable creature.

"it would have been very impressive, as tall as many people, and a very solid, muscly animal built to withstand frequent deep dives to catch its prey," Tennyson said.

"It would not have been the kind of bird that someone could catch alive, it would have been considerably more powerful than a person."

The decline of giant penguins around the world probably has something to do with the rise of marine mammals, with which it coincides.

The expansion of seals, walruses, whales, and other ocean-faring mammals probably provided competition for both food resources and breeding grounds - and the giant penguins lost the battle.