This Fake "God Helmet" Can Induce Mystical Experiences in People

A skateboarding helmet with nonfunctional wires attached has nevertheless proven to have a powerful placebo effect - especially among people who describe themselves as spiritual.

Called the "God Helmet," the device was found to deliver "extraordinary experiences" when participants were invited to try it at a three-day music festival in the Netherlands - but, interestingly, alcohol made no difference to the effect.

The research team, led by David Maij of the University of Amsterdam, wanted to study the role of alcohol in the context of religious rituals.

It's well known that other substances have been used to induce trances and mystical experiences, but the effect of the use of alcohol in religious rituals has received relatively little attention.

"It could be … that in the right suggestible ritual context, alcohol intoxication facilitates mystical and quasi-mystical (i.e., extraordinary) experiences," they wrote in their paper.

"Alternatively, ritual experts such as shamans and witch doctors may benefit from the liberating and mind-altering effects of alcohol as they often display interactions with the supernatural realm following alcohol consumption.

"Alcohol may also enable ritual spectators to be less critical when they witness supernatural events suggested to them by ritual leaders."

To determine if alcohol plays a role in religious susceptibility, the researchers employed the use of a device called the God Helmet.

Originally designed to study the effect of weak electromagnetic transcranial brain stimulation on paranormal experiences in a 2000 study, the helmet subsequently proved a useful tool for inducing "placebo" experiences.

Over the course of three days at the Lowlands festival, 193 participants took a turn with the helmet. They were told the helmet would electrically stimulate their brain to induce a spiritual experience.

The participants filled out questionnaires related to their religiosity and spirituality, and performed an executive functioning test. They also had their blood alcohol levels tested, and were told they were being connected to equipment to monitor their health, such as heart rate stickers.

Then they were blindfolded, equipped with headphones playing white noise, and had to sit wearing the God Helmet for 15 minutes. If they felt something "extraordinary" during this time, they had to press a button. 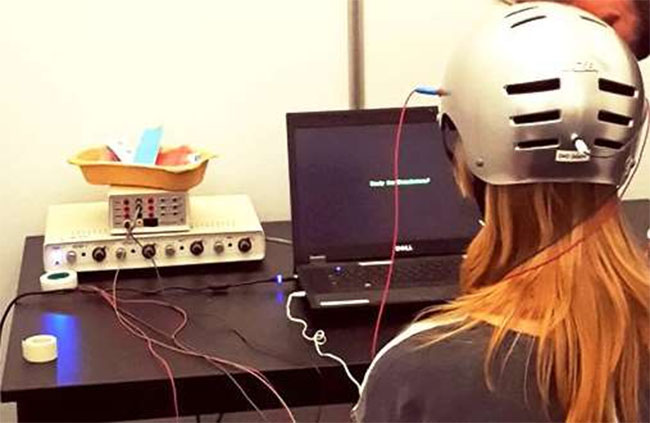 In reality, the health monitors were not connected to anything, and "the helmet was a transformed metallic-colored skate helmet with wires attached to the back of a bogus analog to digital-box which had a flickering light, but the helmet was not attached to any electrical generator," the researchers wrote in the paper.

Around 30.3 percent reported feeling distracted or skeptical during the proceedings.

Some participants reported floating out of their chair, while others reported hearing voices.

"I had the feeling that the helmet was taking control over me. My head started turning around and my eyes were spinning," one reported.

"A strong gravitation or magnetic force was pulling my head back. I wanted to move my head back but it was simply impossible."

"I came loose from the chair, the chair fell and I was floating. The desk started to shake heavily and I felt the presence of a dark figure next to me. It whispered something in my ear that I could not understand."

Overall, the researchers found that alcohol made no difference, both in objective blood alcohol content and self-reported intoxication contexts.

Nevertheless, the placebo brain stimulation elicited a wide range of responses - and self-reported spirituality, but not religiosity, was strongly correlated with a successful "mystical" experience.

"Setting aside the limitations of the study, we did not find evidence that objective or subjective alcohol intoxication increased people's susceptibility to an expectancy-driven manipulation, but future studies can settle this matter by using higher dosages of alcohol in a more ecologically valid context," they concluded.

The research can be read in full in the journal Religion, Brain and Behavior.