All of Google's data centres and offices are going to be running on purchased renewable energy by next year, the company has announced.

That means soon, every time you fire up Gmail or run a Google search, a renewable energy source somewhere in the world will be tapped to power it – a plan Google has been working towards since 2010.

As it's not logistically possible to build and directly connect a solar plant or wind farm to each of Google's buildings, the company will be funding enough projects worldwide to offset its power demands of 5.7 terawatt-hours (TWh) per year.

"To reach this goal we'll be directly buying enough wind and solar electricity annually to account for every unit of electricity our operations consume, globally," Google's Urs Hölzle writes.

"And we're focussing on creating new energy from renewable sources, so we only buy from projects that are funded by our purchases." 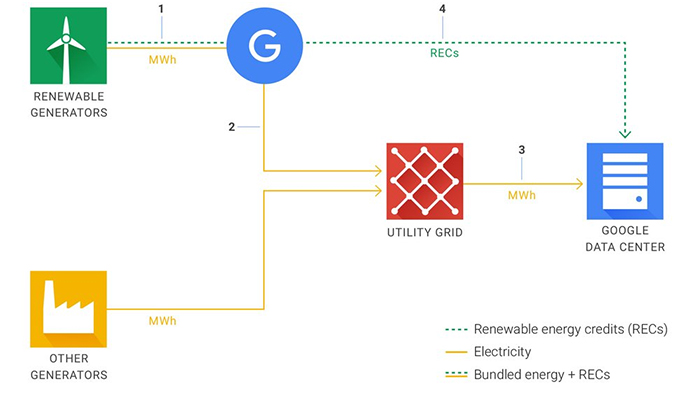 Google has also published a white paper on its clean energy efforts and opened up a new environmental awareness website to report its various initiatives, such as pollution sensors on Street View cars and a project to stop illegal fishing.

Considering more than 1 billion of us are using Gmail regularly, and users watch hundreds of millions of hours of YouTube every day, Google consumes an awful lot of power – in fact, almost as much as the city of San Francisco.

Google will stay connected to the grid throughout the year and will at times consume power not generated by renewable sources – in instances where the sun isn't shining, for example, and the company needs to turn to fossil fuel services to keep services running.

But the plan is to balance this on an annual basis, by overbuying renewables at other times to compensate.

"In some hours, we are purchasing more renewable energy than we are consuming for our operations, but over the course of a year our total global renewable energy purchases match up 100 percent to our global consumption," the company explains in its white paper.

The good news is Google isn't the only tech company committed to storing our 1s and 0s in the most environmentally friendly way possible.

Apple says 93 percent of its worldwide operations are now powered by renewable energy, and the company is planning to support projects generating 4 gigawatts of clean energy by 2020.

Facebook – another tech giant with a lot of data to store – wants to have 50 percent of the energy powering its sites to come from clean and renewable sources by 2018.

There's still a lot more progress to be made, but it's encouraging to see some of the biggest names in technology leading the way.

What's more, because these projects use free natural resources, there's no dramatic fluctuations in cost, as there can be with changing oil or coal prices.

And according to Google's Urs Hölzle, there's much more to come.

"Today, we are the world's largest corporate buyer of renewable power, with commitments reaching 2.6 gigawatts (2,600 megawatts) of wind and solar energy," he writes.

"That's bigger than many large utilities and more than twice as much as the 1.21 gigawatts it took to send Marty McFly back to the future."