Microbial mats in a cave on Hawai'i. (Jimmy Saw)

Microbes are the smallest known living organisms on Earth and can be found just about everywhere, even in the cold, Mars-like conditions of lava caves.

On the island of Hawai'i, scientists recently found a marvelous assortment of novel microbes thriving in geothermal caves, lava tubes, and volcanic vents.

These underground structures were formed 65 and 800 years ago and receive little to no sunlight. They can also harbor toxic minerals and gases. Yet microbial mats are a common feature of Hawai'ian lava caves.

Samples of these mats, taken between 2006 and 2009 and then again between 2017 and 2019, reveal even more unique life forms than expected. When researchers sequenced 70 samples for a single RNA gene, commonly used for identifying microbial diversity and abundance, they could not match any results to known genuses or species, at least not with high confidence.

"This suggests that caves and fumaroles are under-explored diverse ecosystems," write the study's authors.

Microbes, after plants, account for most of our planet's biomass and nearly all the biomass in Earth's deep subsurface. Yet because these organisms are so tiny and live in such extreme environments, scientists have historically overlooked them.

In recent years, underground microbes have received more interest because they exist in environments very similar to those found on Mars. But there's still a long way to go.

Recent estimates suggest 99.999 percent of all microbe species remain unknown, leading some to refer to them as "dark matter".

The new research from Hawai'i underscores just how obscure these life forms are.

Diversity among the sites varied. Older lava tubes, those between 500 and 800 years old, hosted more diverse microbe populations than geothermically active sites or were less than 400 years old.

While these older sites were more diverse, the younger and more active sample sites had more complex microbe interactions, likely due to the lower diversity. The microbes may have to work together to better survive.

Researchers suspect it takes a while for microbes to colonize volcanic basalts, and as the environment around them changes, so does their community structure. In cooler caves, for instance, Proteobacteria and Actinobacteria are more prevalent.

"This leads to the question, do extreme environments help create more interactive microbial communities, with microorganisms more dependent on each other?" wonders microbiologist Rebecca Prescott from the University of Hawaiʻi at Mānoa.

"And if so, what is it about extreme environments that helps to create this?"

In younger lava caves, microbes tended to be more distantly related. This suggests competition is a stronger force in harsher environments, one that lowers the chance of closely related species living side by side. 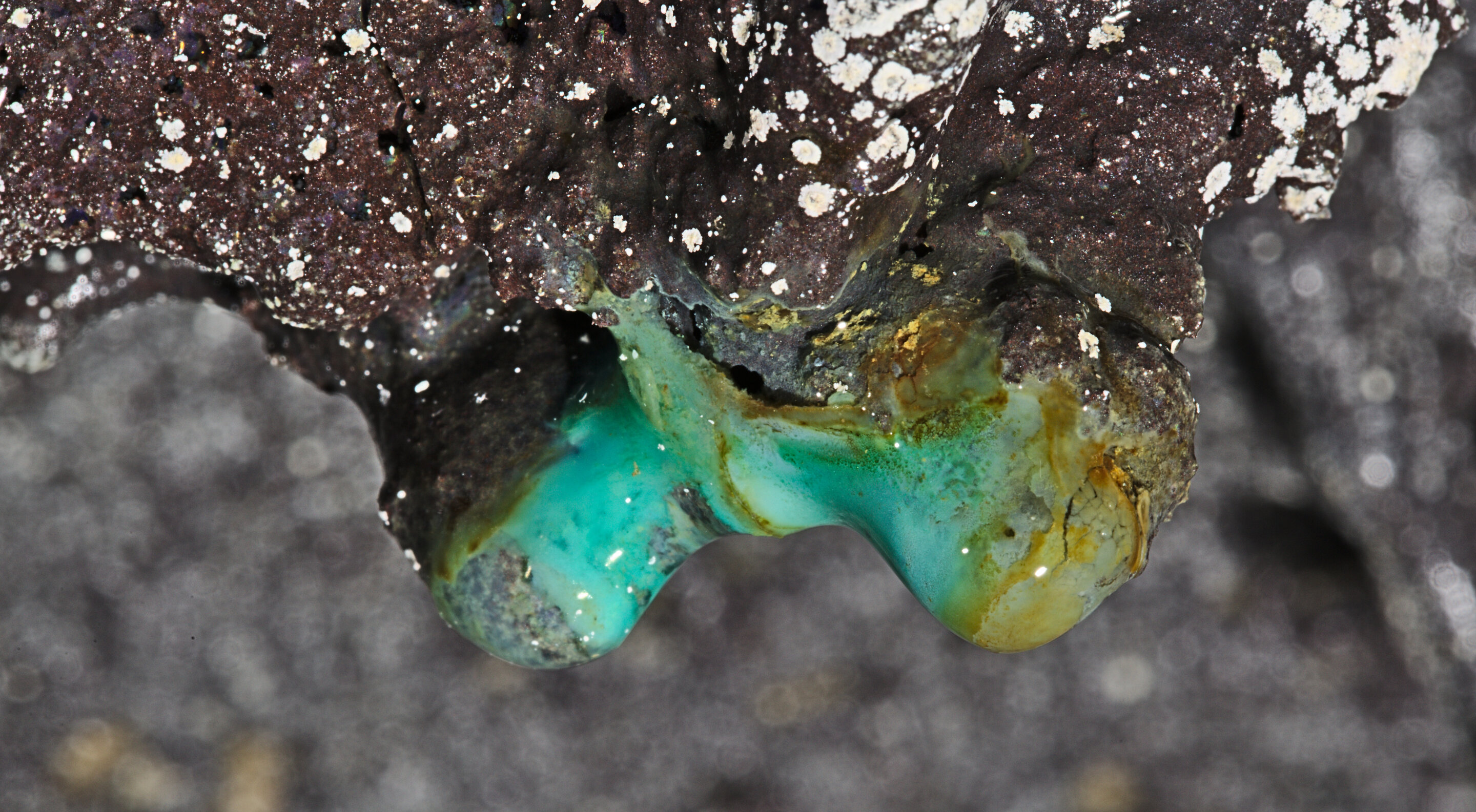 A stalactite formation in a Hawaiʻian cave with white microbial colonies. (Kenneth Ingham)

Several classes of bacteria, like Chloroflexi and Acidobacteria, existed at nearly all sites, regardless of age.

These microbes seem to be key players in their communities. The authors call them "hub" species as they bring other microbes together.

It's possible that Chloroflexi microbes may provide sources of carbon in the ecosystem by harnessing light energy in relatively dark conditions.

But for now, that's just speculation. Because only a single gene was partially sequenced in the study, Prescott and her colleagues can't say what a particular microbe's role is in their underground community.

"Overall, this study helps to illustrate how important it is to study microbes in co-culture, rather than growing them alone (as isolates)," says Prescott.

"In the natural world, microbes do not grow in isolation. Instead, they grow, live, and interact with many other microorganisms in a sea of chemical signals from those other microbes. This then can alter their gene expression, affecting what their jobs are in the community."

The study was published in Frontiers in Microbiology.