Ash plume rising from Kīlauea on May 11 (USGS)

The dangers of building a home on the skirt of an active volcano have become quite clear in recent days, as residents in Hawaii have needed to evacuate from neighborhoods around Kīlauea to avoid the lava flows and toxic gases that have emerged from numerous fissures.

But the advancing molten rock - and the potential for future eruptions and ejections of boulders - threatens more than the homes.

Nearby, nestled between two neighborhoods, is a geothermal plant that is home to thousands of gallons of flammable chemicals and deep wells that pose serious risks if they overheat or are breached.

Long a concern for residents and the target of lawsuits challenging its placement on an active volcano, the Puna Geothermal Venture (PGV) is a major safety issue in the wake of the eruptions and earthquakes that have shaken the Big Island for days, government officials say.

Authorities worry that the seismic activity could cause gas leaks or explosions at the plant, which is near fissures that have broken the surface. 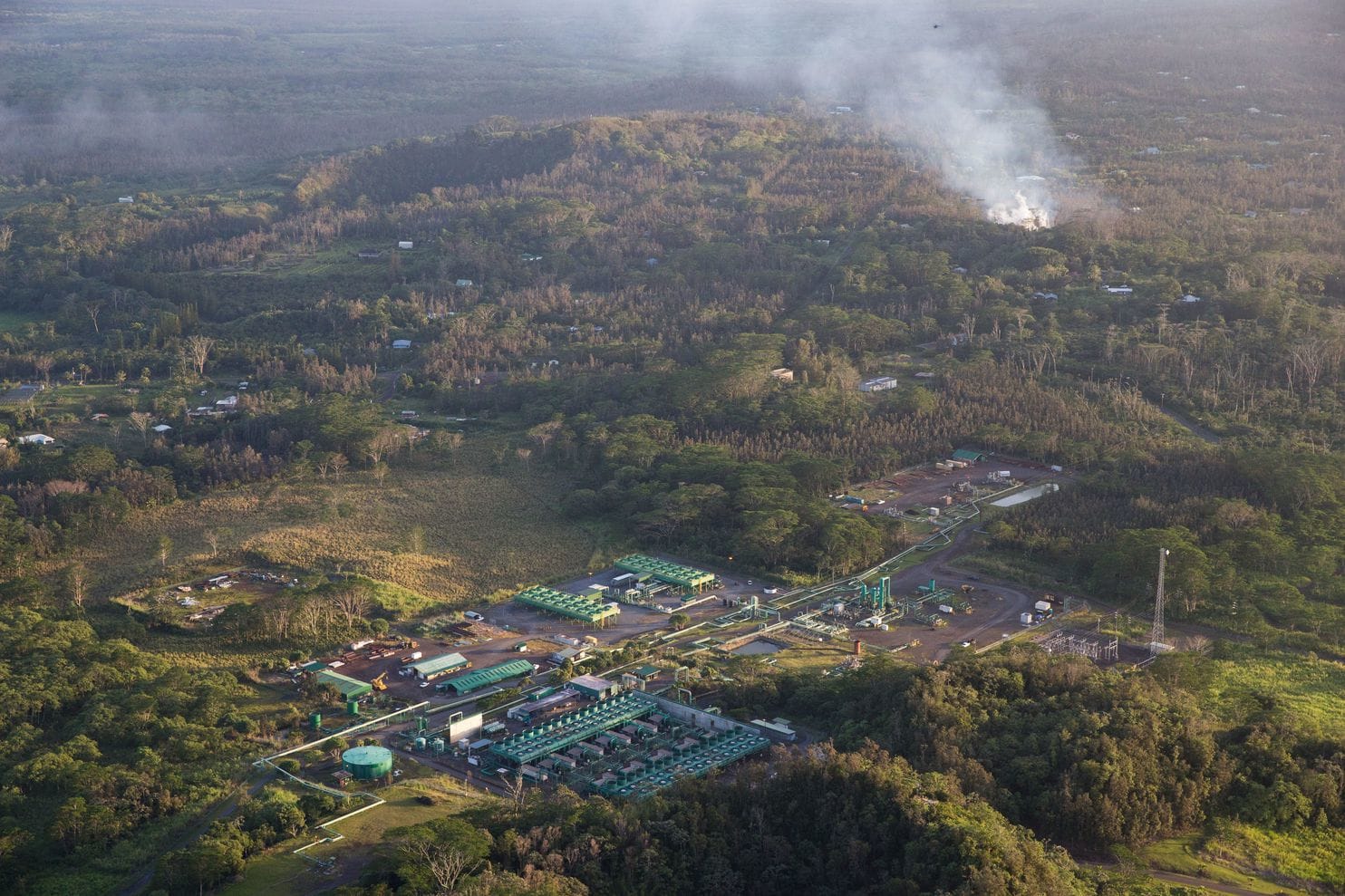 Before dawn Thursday, PGV employees removed a large reserve of pentane - 60,000 gallons of highly flammable solvent used in the powering of turbines - because of fears that it could leak and ignite.

PGV officials and those of its parent company, Reno, Nevada-based Ormat Technologies, did not respond to requests for comment.

The move of chemical stores from the plant here in the southeastern corner of the island was completed after Hawaii Gov. ­David Ige (D) issued an emergency proclamation and gave the state greater authority to step in and mandate precautions.

It also came about 11 hours before a 4.2-magnitude earthquake struck the island Thursday, one of several temblors around the volcano.

Residents and officials remain concerned about potential explosions and toxic gas leaks from the underground wells that provide heat for energy production.

If the wells break, they could release dangerous gas - including colorless, flammable and toxic hydrogen sulfide - into the area around Leilani Estates and Lanipuna Gardens, the evacuated neighborhoods that already are choked with volcanic fumes.

"Volcanologists know there is magma under and around the geothermal well fields," County of Hawaii Council member Jennifer Ruggles, who represents western Puna, said in a statement Thursday night.

"The magma is moving and it is unpredictable. There is a real risk that the wells could be damaged."

Ruggles noted that if a leak were to happen, winds could disperse the gas for miles. She suggested that everyone living within two to three miles of the PGV have an evacuation plan.

Some neighbors argue that a geothermal plant that uses dangerous chemicals never should have been built in Pahoa.

"This is one of the most unstable pieces of land on the entire planet, and they knew that," said Robert Petricci, president of the Puna Pono Alliance watchdog group, who lives near the plant. "They built it anyway to make money."

The PGV has irked residents for decades, even as it produces clean energy for the island. The plant has nine wells that run as deep as 8,000 feet, according to Wil Okabe, managing director for the County of Hawaii.

The wells allow steam and hot liquid to rise and power turbines, but they have the potential to explode. They normally produce up to 38 megawatts of electricity, which is sold to Hawaii Electric Light Co.

Operations at the Puna plant have been halted since May 3 because of the seismic and volcanic activity. Now that the pentane stores have been moved, officials have turned their attention to the underground wells.

"We are very concerned about the wells," Okabe said.

"We've put cinder and other things on top of them, but we are still waiting for more information from experts on the mainland about how to deal with them."

Okabe said one possible way to mitigate the danger could be to pump water into the wells to cool them.

Bob Culnan, 64, a former PGV power plant operator, said in an interview Friday that he believes the water-cooling method could work but needs to be done quickly, noting that "killing the wells" should happen soon, before pressure builds up beneath the closed vents.

Should they explode, it could be difficult to cap them later, meaning they could spew steam and gas for years.

Culnan said that, under normal circumstances, hydrogen sulfide mixes with sulfur dioxide from the volcano to become water vapor and solid sulfur, but the deep wells allow some hydrogen sulfide to rise before that process occurs.

Culnan said that he never experienced health problems while working at the plant and that if a well were to break, he does not think it would present a permanent health hazard.

"I love geothermal," Culnan said. "I put my heart and soul into that place, and I think it's an excellent source of power for the island."

Aura Garcia, 56, an anthurium farmer who lived across from the PGV site for decades, said she is worried that the company's wells might already be venting dangerous gas throughout the area.

From the time she moved there in January 1986 with her husband and newborn daughter - even before the geothermal plant was developed over existing geothermal wells - there were problems with gas emissions that made her and other residents sick, she said.

"When we first moved in, we thought geothermal was just good, natural energy and that it just smelled bad," she said.

But years of living there changed her mind. She regularly saw the wells across from her home let off toxic steam. She would suddenly fall ill without explanation and sometimes felt lethargic and "immobilized" she said, sometimes for days. Garcia said she finally moved in 2012.

"I was getting to the point where I couldn't breathe," she said. "They need to kill the wells. . . . With all the seismic activity, one of them is going to blow up."

Garcia's fears of gas emissions were confirmed in studies over the years. In 1991, from June 12 to June 14, the PGV accidentally released into the air 180 pounds per hour of hydrogen sulfide and other toxic compounds, including lead, chromium, arsenic and mercury, according to an environmental study conducted a month later.

According to the report from Goddard and Goddard, the release posed a "significant health concern" that violated emission limits and correlated with health problems in the area.

Kīlauea's East Rift Zone, along which the Leilani Estates neighborhood sits, as seen May 9 from a helicopter over Pahoa, Hawaii. The Puna Geothermal Venture power plant is at lower right. (Cindy Ellen Russell/AP)

Hydrogen sulfide is a toxic gas that can irritate lungs and eyes at low concentrations, and in large quantities can cause headache, dizziness, respiratory paralysis and death, with possible symptoms arising months after exposure, according to the International Volcanic Health Hazard Network.

The county government has been aware of residents' complaints and has run a decades-long Geothermal Relocation Program to help those who live near the plant move away.

Residents who applied for the state-funded program could expect to be paid up to 130 percent of their home's assessed value, though the program then retained the right to resell the properties.

The program helped residents in 20 homes move out, and it is still active, said Michael Yet, the County of Hawaii planning director. At least one person had inquired about the program within the past several days, Yet said.

Other toxic leaks have happened at the plant more recently.

In the spring of 2013, a pump failure and a tripped breaker resulted in the plant releasing dangerous levels of contaminants, including hydrogen sulfide, accidents that yielded a U$76,500 fine from the Environmental Protection Agency.

An inspection at the time found "that PGV had failed to take necessary steps to prevent accidental releases of hydrogen sulfide," the EPA said in a statement.

In 2014, Tropical Storm Iselle triggered another accident. Residents said they heard a sound like a "jet engine" roar, smelled sulfur, then experienced headaches, coughing and lethargy when a plume of gas was released from the plant.

PGV representatives said at the time that the release was intentional and did not exceed regulatory limits for toxins.