The world watched avidly earlier this year when NASA spacecraft New Horizons made a historic encounter. It flew past an object called 2014 MU69 - AKA Ultima Thule - the farthest named single object in the Solar System.

We know what it looks like. We know it's a bit of a weirdo. But now scientists have crunched the numbers, analysed the data, and detailed those first observations in new scientific research.

MU69 is an almost incomprehensibly long way away - an average distance from the Sun of 6.7 billion kilometres (4.1 billion miles), with an orbital period of 293 years. New Horizons launched in January 2006, which means it took 13 years to get all the way to where MU69 hangs out in the Kuiper Belt.

But that position is important. MU69 isn't just some weird emo loner skulking about in the cold and dark all by itself.

At that distance from the Sun, it's thought that objects with a stable orbit like MU69 have remained pretty much undisturbed and unchanged since the formation of the Solar System. Not much solar radiation penetrates those far reaches, so objects are less affected by heat.

MU69 is like a time capsule that can tell us about the conditions in the Solar System around the time that Earth was still forming.

But it's also really weird - two objects stuck together a bit like a snowman, but also a bit flattened, like pancakes.

"We've never seen anything like this anywhere in the Solar System," New Horizons principal investigator Alan Stern of the Southwest Research Institute said earlier this year.

The data sent back home by New Horizons in the weeks following the flyby reveals that the object is consistent with our ideas of planetary formation. 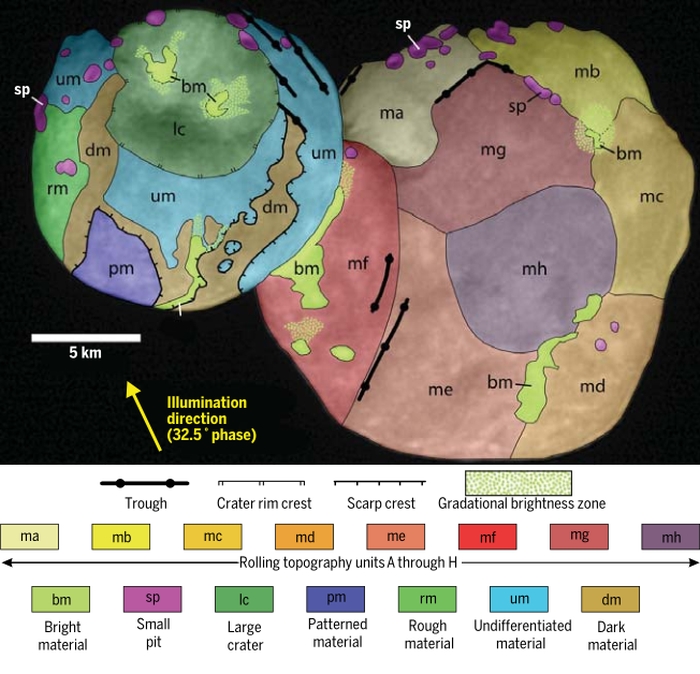 It's thought that as a protoplanetary disc of dust and gas orbits a newborn star, pieces of matter start to clump, held together by electrostatic forces. As they grow larger and larger, their gravity grows stronger too, which in turn pulls in more and more pieces.

MU69 is in the Kuiper Belt, a torus-shaped ring of objects in the outer Solar System, a remnant of its protoplanetary disc. The researchers believe that it was once two chunks of rock orbiting each other until the two pieces were brought together in a gentle collision.

"This fits with general ideas of the beginning of our Solar System," said New Horizons investigator William McKinnon of Washington University in St. Louis.

"Much of the orbital momentum of the Ultima Thule binary must have been drained away for them to come together like this. But we don't know yet what processes were most important in making that happen."

What they have ascertained is that MU69's spin and orbit have likely been unchanged since that merger. Impact cratering on the surface of the object is minimal, and, although individual geological features have been identified, its colour and composition are mostly uniform.

Nor does it have any moons, rings, a transient atmosphere, nor gas emission or dust - nothing that indicates relatively recent perturbation. It's a very peaceful object. This means it has probably come into contact with very few other objects since the merger, if any.

It is also, as early imaging suggested, very red, brighter in the near-infrared spectrum than the visible. It's still unknown what gives it that red colour - it could be organic macromolecules produced by the breakdown of simpler ones via irradiation, or it could be caused by silicates weathered by space, although there's no direct evidence of silicates on MU69.

Although it's pretty much the same colour all over, there are some very subtle variations that the team is yet to figure out.

But there's a lot of data still to come. New Horizons is over six light-hours away, with a slow data transmission rate. It was just 2,000 bits per second after the probe passed Pluto in 2015.

This paper is just based on the first 10 percent of the data New Horizons collected, and it's expected that it will finish sending the rest sometime in 2020.

Let's hope it contains some answers - and maybe some even more interesting questions.