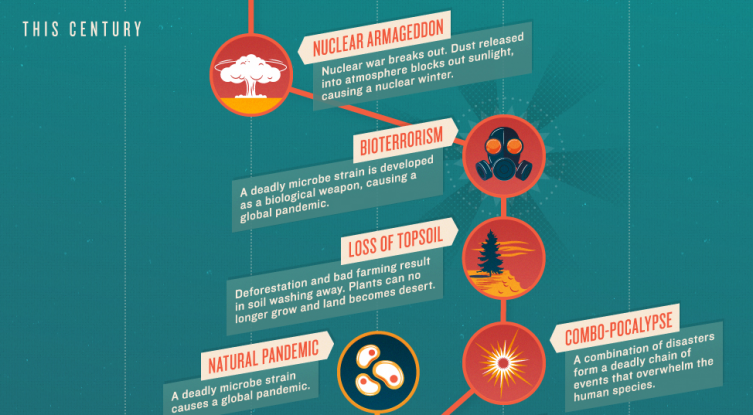 Need some help with your doomsday prepping? You’re in luck. This handy BBC Future infographic looks at all of the things that could potentially destroy mankind, and ranks their likelihood of happening in the next decade, century and millennium.

You can see a much bigger version here.

The infographic isn’t intended to make people panic, but to rationally assess the chance of some commonly feared scenarios - such as nuclear armageddon - actually happening (we're more likely to die from overpopulation, in reality).

Each potential armageddon is ranked on a scale from “keep calm” to “it’s all over”, and it's indicated whether it's a man-made or natural threat, and how quickly it could wipe out humanity. The rankings are based on the judgement of the BBC, using data from NASA, Universe Today and futurist Nick Bostrom. You can see a list of all sources here.

So should we be fearing total anhilation just yet? For the next five years at least we’re pretty safe, with only the threat of honeybee die-off hanging over our heads. But this century we have some big challenges coming up, such as nano weapons and climate change. And if we can survive all of those, the reality is we’ll eventually be wiped out by either the death of the Sun or the death of the Universe. Unfortunately, nothing can live forever.

But don’t panic, we have a long, long time to go before either of those happen. And when they do, we'll be taking the rest of life in the Solar System out with us.

Still, if you happen to see a needy looking bee around your neighbourhood, make sure you leave an emergency kit out for it - you never know, it could be the bee that saves the human race.