Here's The Truth About That Photo of 'Mushrooms' Growing on Mars

A peculiar new paper, published in a little-known scientific journal, has the tabloids stirred up about the possibility of life on Mars.

According to this paper, an international team of scientists are now claiming to have found evidence of 'mushrooms' growing on the surface of the Red Planet.

The 'evidence' is primarily based on images, taken by NASA's Curiosity and Opportunity rovers, which capture a birds-eye-view of what look like, well, mushrooms. 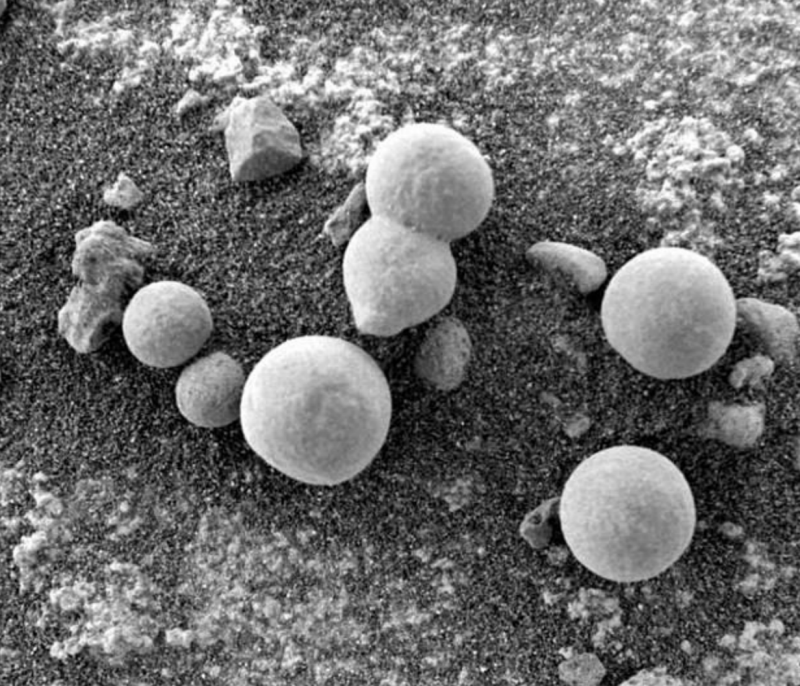 The pictures have the internet freaking out, as stories like this usually do, but some folks online remain justifiably skeptical.

It's often said that you shouldn't judge a book by its cover, but you can partially judge a scientific paper by its journal. Just one glance at the Journal of Astrobiology and Space Science website, and it's pretty clear to see that this isn't a sophisticated outlet for high-impact science.

On its website, the journal seeks research papers on topics like "Protecting Earth From Martian Organisms" so that it can present "all points of view" on the biology of Mars.

In regards to the mushroom paper - mysteriously entitled "Evidence of Life on Mars?" -  the editorial board claims that it recognised the "controversial implications", and so it had six independent scientists and eight senior editors peer review it.

Three of these reviewers rejected the paper outright, and one editor was so vehemently opposed to the paper, that he apparently still wanted to get rid of it even after majority approval.

Nevertheless, the paper was ultimately published and the journal's press release is unusually kind, asking simply, "Why the opposition to publishing evidence?". It also alludes to religious motivations as a source of such "irrational opposition".

But don't be fooled by this seemingly harmless question. This paper is not jam-packed with irrefutable evidence and watertight reasoning. Despite admitting that "similarities in morphology are not proof of life" and that their evidence is "circumstantial and unverified", the authors claim that the answer to their paper's title is a "resounding yes".

"We admit," says co-author Regina Dass, a mycologist at Pondicherry University in India, "we don't have a smoking gun. No photos of cells or cellular structure. There is no definitive proof, only a lot of evidence which shouts: Biology."

(In a particularly ironic side note, Dass answered a question on Research Gate recently by warning: "It is not a very good idea to decide just by observing macromorphological features.")

While NASA itself hasn't responded to these new claims, its scientists have already researched the phenomenon you can see in the photo above.

Instead of mushrooms, NASA calls them 'blueberries', but unlike the authors of this new paper, no one at the space agency actually thinks these tiny spheres are a sign of life, let alone a growing fruit or vegetable.

In 2004, the Opportunity rover discovered millions of these 'blueberries', and upon analysis they were determined to be composed of the iron oxide, hematite.

About three centimetres across (1.2 inches), these balls of solidified hematite were unlike anything ever seen on Mars before. Embedded in the Martian rock, like blueberries in a muffin, NASA explains that these spheres of hematite were solidified in the presence of water and then slowly released by erosion.

"We are not disagreeing with NASA. NASA has some of the greatest scientists and engineers in the world," says co-author Vincenzo Rizzo, a biogeologist working for the National Research Council.

"However, hematite is also a product of biological activity. Just as stromatolites are fashioned together via the action of cyanobacteria, fungi and bacteria also help to cement terrestrial hematite together. We should expect that the same biological processes helped fashion hematite on Mars."

Whatever the authors might say, it certainly seems as though they do not see eye-to-eye with the world's leading experts. Hence, many on Reddit have been quick to dismiss the study, saying it appears to be "vanity" published, without many standards at all.

One user, by the name of Zeeblecroid, was brutally succinct in their criticism:

"The journal and article are both garbage. There's a community of self-proclaimed astrobiologists who use the same crackpot tricks (mostly misrepresenting mundane photos of basic geological features as hard evidence of life) and have been for decades. They've been pounding that drum since at least the mid-1990s."

The truth is, humans are notoriously irrational when it comes to seeing Mars as it truly is.

In 2014, NASA was actually sued by a self-proclaimed "astrobiologist" for not investigating what he clearly saw as a mushroom-like fungus on the surface of Mars. It turned out to be nothing more than a rock.

By the looks of things, this newest paper is just another thump on the same hollow notion.

The paper was published in the Journal of Astrobiology and Space Science.