Here's What Happens When Astronauts Use a Fidget Spinner in Space

Okay, we know that the fidget spinner craze is pretty much over by now. But when you're living on the International Space Station, payloads can take a while to reach you.

Now, astronauts on the ISS have finally got their hands on what was briefly the trendiest contraption in our part of the universe. And watching it spin in microgravity is enough to make the toy look cool again.

NASA astronaut Randy Bresnik, who is currently aboard the space station as part of Expedition 52/53, shared a video over the weekend of him and his colleagues playing with a fidget spinner.

The team performs a series of tricks with the NASA-branded (of course) spinner, pretending to spin along with it in various directions as they float through the microgravity of the space station.

For example, flight engineer Mark T. Vande Hei holds the fidget spinner while he himself does full rotations along a horizontal plane; another crew member Joe Acaba does dizzying somersaults while the fidget spinner rotates in his hand.

But as fun and nauseating as that is to watch, the best part is, of course, seeing the fidget spinner freely floating through the air while continuing to spin. You can even see the iconic toy floating against a backdrop of Earth as seen through the ISS cupola windows.

Even if you're sick and tired of fidget spinners, that's a pretty damn awesome thing to watch.

And, as it turns out, microgravity does make a fidget spinner act differently than what we can achieve down on the ground.

Typically, you hold onto the centre part of the spinner as you give it a whirl, and the whole thing works rotates so smoothly because of the tiny balls encased in two rings called 'races'. Depending on the model, there are also ball bearings on the prongs of the spinner, as you can see in the photo below: 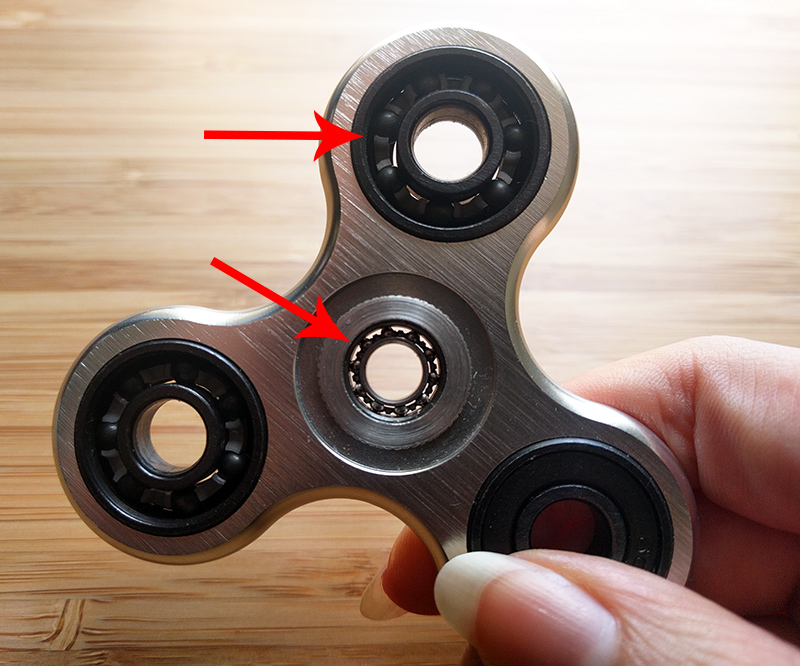 The smoother the action in that central bearing race, the less friction there is and the toy can spin for longer. But in space, the centre part doesn't stay still.

"Allowing the fidget spinner to float reduces the bearing friction by permitting the rate of the central ring and outer spinner to equalise, and the whole thing spins as a unit," NASA explains in the video description.

Indeed, if you watch closely when Bresnik lets go of the spinner and lets it float around, you notice that the NASA logo stands still at first, but quickly starts rotating along with the rest of the device.

Now, at first you might think that in space a fidget spinner would spin for much longer, but as it turns out, there's still plenty of friction happening in the central ball bearing to make the spin eventually slow down.

Bonus: If you're curious about what happens if you spin a fidget spinner in a vacuum chamber, check out this video from The Action Lab: