Here Are The Submarines That Might Explore Titan's Methane Sea

Now we have been given a glimpse into the robotic submarines that NASA might use to explore the liquid hydrocarbon seas of Titan, Saturn's largest moon. And they might be launching them into space as early as 2040.

At the 2015 NASA Institute for Advanced Concepts (NIAC) Symposium in Florida, a group of NASA engineers and scientists presented a conceptual design of the unmanned submarines that might be used to explore the moon, as David Szondy reported for Gizmag. Spoiler - it looks pretty cool, as you can see below.

As far as moons go, Titan is a bit of an oddity. To start with, it's HUGE. So big, in fact, that it's larger than Mercury, and it has its own proper atmosphere, which is made up mostly of highly pressurised nitrogen and methane. It's also pretty cold, at a temperature of around -179 °C.

But perhaps most interestingly is the fact that surrounding Titan's poles are three seas, filled with liquid methane and ethane, as flybys by the spacecrafts Voyager and Cassini have confirmed. The largest of these seas is Kraken Mare, which covers 400,000 square kilometres and is estimated to be up to 160 metres deep. However, some calculations put it at nearly twice that depth.

Because of Saturn's gravitational pull, Kraken Mare also has tides, as well as a shoreline and evaporite deposits, which makes it particularly interesting to scientists.

And that's where the submarines come in. In this design, the models would be around 1 tonne, and would be powered by a 1 kW radiothermal Stirling generator, allowing it to travel at around one metre per second.

After being dropped off by a winged spacecraft, the submarine would slam down onto the surface of Kraken Mare at hypersonic speeds, before diving down to being its 90-day mission. 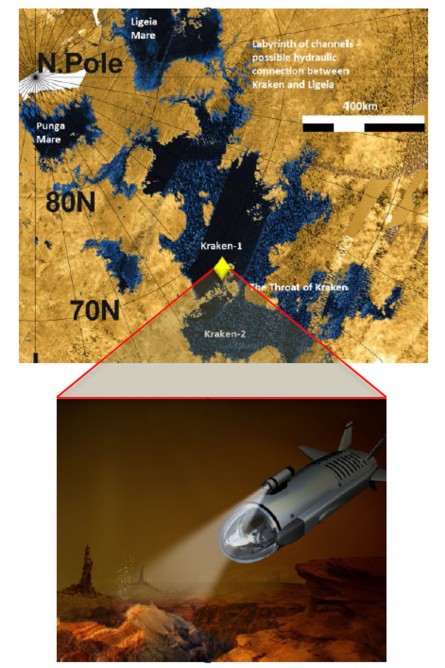 In order to communicate with Earth, the submarine would emerge for around 16 hours each day, during which time a mast camera will be used to monitor its surroundings - including, hopefully, some pretty spectacular views of Saturn.

But, of course, there are plenty of issues with driving a submarine on an extraterrestiral moon. For starters, the excess heat produced by the generator would boil the liquid gas around the submarine. It will also take some more research to work out how a craft would float in a sea of gas, and how the craft would be able to balance and propel itself safely.

As the authors of the report conclude: "This study is only the first cut at a design, and has identified a number of technical trades and areas deserving closer study. Even with its planetary application aside, this exercise has forced us to look at submarine vehicle design drivers in a whole new way."

The report is pretty tight-lipped about the objectives of the mission, but we think that any mission heading out to explore extraterrestrial seas is pretty exciting. Analysing the organic chemicals on Titan might also help us understand more about how life began on Earth.

Now we really want to know what the submarins that will explore the ocean-covered moon Europa will look like. Bring on the era of extraterrestrial ocean exploration.