A huge collision between two stars some 1,800 light-years away could add a bright new object to our night sky, say scientists – though this temporary star will only be visible for two or three years.

This is the first time experts have tried to forecast a cosmic explosion like this, and the researchers say there's usually only a "one-in-a-million chance" of being able to predict a new star before it actually appears.

Astronomer Larry Molnar and his team from Calvin College in Michigan have been keeping a close eye on a binary star called KIC 9832227, which is actually two stars orbiting each other.

The researchers think these stars are getting closer together, and could collide with each other in 2022.

That kind of merging is what's called a red nova, and the resulting explosion would cause a 10,000-fold increase in brightness – enough for it to be visible from Earth for some time.

"If the prediction is correct, then for the first time in history, parents will be able to point to a dark spot in the sky and say, 'Watch, kids, there's a star hiding in there, but soon it's going to light up'," says Calvin College dean of research Matt Walhout, who wasn't involved in the study.

The story really began in 2008 with V1309 Scorpii – another binary star that caused a red nova.

Though the incident wasn't predicted ahead of time, observations of it showed the orbital period between the two individual stars dropping faster and faster as the collision approached.

Molnar and his colleagues spotted the same pattern in KIC 9832227 in 2013 and 2014, and continuing throughout 2016 – meaning the time taken for the stars to circle each other is indeed shrinking.

"Bottom line is we really think our merging star hypothesis should be taken seriously right now and we should be using the next few years to study this intensely so that if it does blow up we will know what led to that explosion," says Molnar.

The team is monitoring the star's radio, infrared, and X-ray emissions using a variety of instruments, including the Very Large Array observatory in New Mexico, the Infrared Telescope Facility in Hawaii, and the XMM-Newton spacecraft in orbit around Earth.

Those readings should enable us to figure out if KIC 9832227 is on course to light up the night sky. Then the hunt will be on to find other binary stars like it, and see if we can predict more of these collisions. 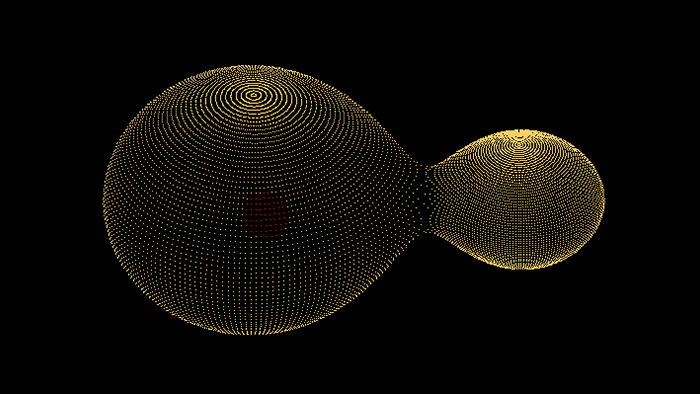 If events play out as the astronomers have predicted, we'll be able to see the brilliant red nova explosion in the northern wing of the Cygnus constellation in 2022 – no telescopes necessary.

Remember though that technically this collision – should we be able to witness it – actually happened a long, long time ago, as the light we'll be seeing will be 1,800 years old.

"Nobody has ever managed to predict the birth of a star before so this is really unprecedented," the Royal Astronomical Society's Robert Massey, who wasn't involved with the study, told Sarah Knapton at The Telegraph.

"I think there will be a race among amateur astronomers, and members of the public to spot it first."

The findings have been made available online, while the authors await peer review in the lead up to publication in a scientific journal.

The research is also being used as the basis of a forthcoming documentary called Luminous, and you can watch the trailer below: