If published pseudoscience turns out to be faked, does that make it pseudo-pseudoscience?

That's the question we're forced to ask following stunning allegations over the disputed authorship of a homeopathy paper in India - the father-and-son team behind the research were reportedly arrested for being 'fake doctors'.

The paper in question – which has now been retracted from a controversial science journal focussed on 'evidence-based' alternative medicine – concerns the niche field of treatment known as 'Psorinum Therapy'.

According to the researchers, psorinum is the alcoholic extract of "scabies, slough, and pus cells", which can activate immune cells such as macrophages and "trigger a complex anti-tumour immune response". But it must be prepared and administered 'correctly', by diluting one part in ten a total of six times (that's one part in a million by the end).

The 'science' here may sound a little questionable, and so too are the circumstances behind the study, co-authored by father-and-son duo Ashim and Aradeep Chatterjee, among others. Maybe. 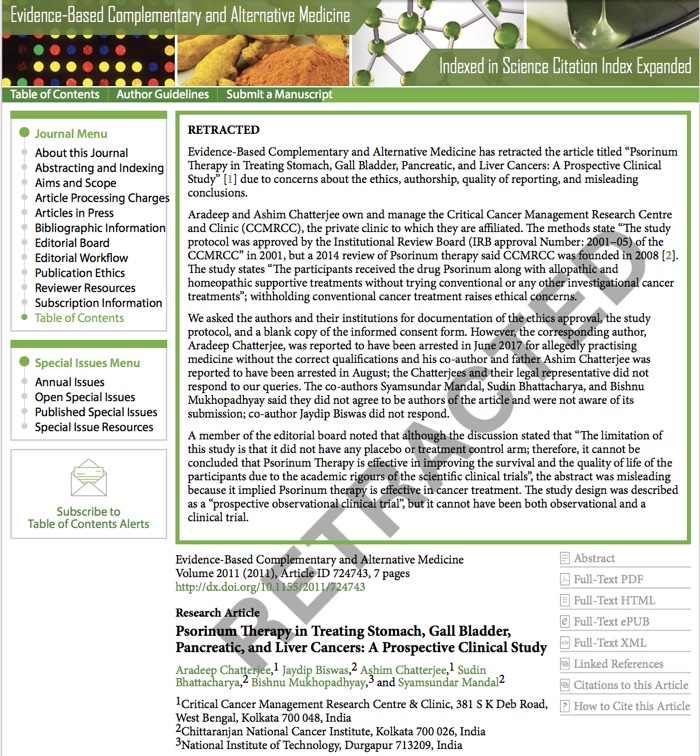 Ashim and Aradeep own and manage a private clinic called the Critical Cancer Management Research Centre and Clinic (CCMRCC) in Kolkata, but despite the impressive name and its sheer number of Cs, the facility might be one to skip.

Ashim, a practising homeopath, and his son, Aradeep, a cancer specialist, were both arrested last year for being what the Indian media called 'fake doctors' – with police saying the pair operated their clinic without holding the necessary medical qualifications they claimed to possess.

According to reports, Aradeep claimed to be an MD in integrative oncology but has no medical degree, while his father's allopathic medical degree is also alleged to be fraudulent.

It's not immediately clear where the criminal proceedings are up to, but the law isn't the only thing catching up with the Chatterjees – so too, belatedly, is peer review.

Last month, the editors of Evidence-Based Complementary and Alternative Medicine issued a retraction of the pair's 2011 blister pus paper, citing "concerns about the ethics, authorship, quality of reporting, and misleading conclusions".

Chief among the editors' concerns, the researchers claimed their study protocol was approved in 2001, but their clinic was only founded in 2008. Hmm.

When asked to clarify the situation, the Chatterjees did not respond – but even more damning, three other co-authors listed on the paper said they never agreed to be credited as such, and were not even aware of the study's submission to the journal.

Other issues with the research are more glaring and arguably should have been caught well before the paper's publication in 2011.

Notably, participants in the psorinum trial hadn't previously attempted conventional cancer treatments, which raises ethical questions about the Chatterjees' provision of care, and other technical problems with the research's presentation suggested the paper wasn't ready for publication.

Why was it published then, and why were the errors only picked up years down the track? Sadly, this looks to be one of those cases where peer review isn't adequately performed, and part of the responsibility for that has to be levelled at the journal itself.

For what it's worth, the journal charges authors who want to see their work published a 'processing' fee. There are a host of issues with commercialisation tactics like this, which we've discussed before on more than a few occasions.

But even more alarmingly, one of the founding members of the journal's editorial board, who is no longer affiliated with the publication, has described its peer-review system as "farcical", estimating some 80 percent of its content amounts to "useless rubbish".

There's a lot of messy stuff going on here, and to be honest, we're not entirely sure where this leaves us.

All we can say with any certainty is, until we hear different: don't believe everything you read about the therapeutic properties of blister pus.

The science just isn't in yet.

The findings have been retracted from Evidence-Based Complementary and Alternative Medicine.