How a Mistranslation Made You Think Your Tongue Had 'Taste Zones'

As you grow older and reflect on the things you learned in grade school, you slowly come to realise that many common, everyday facts that your third grade teacher told you about - facts that you took as truth your entire life - are, in fact, nonsense.

Case in point: have you ever heard that your tongue has 'taste zones' that are responsible for picking up specific tastes? If so, you’re not alone, and you mainly have Edwin G. Boring to blame for your confusion.

According to C. Clairborne Ray from The New York Times, the human tongue is slightly more sensitive to some tastes in certain areas (keyword: slightly). However, a rigid map of these locations is almost impossible, despite what your grade school textbook had you believe. Instead, your tongue is a complex organ that's jam-packed with a bunch of different taste buds that are capable of picking up multiple flavours - but certain flavour receptors are not relegated to certain areas.

So where did this confusion come from? Ray claims that the 'taste zone' map was first sketched and published in 1942 by Edwin G. Boring, a psychologist who worked for multiple universities in his time such as Harvard and Clark University.

Boring's map outlined areas for four tastes - sweet, supposedly at the tip of the tongue; salty and then sour in the middle; and bitter at the very back - but didn’t account for the fifth: umami, a taste that is often described as 'meaty', sort of like how MSG tastes. 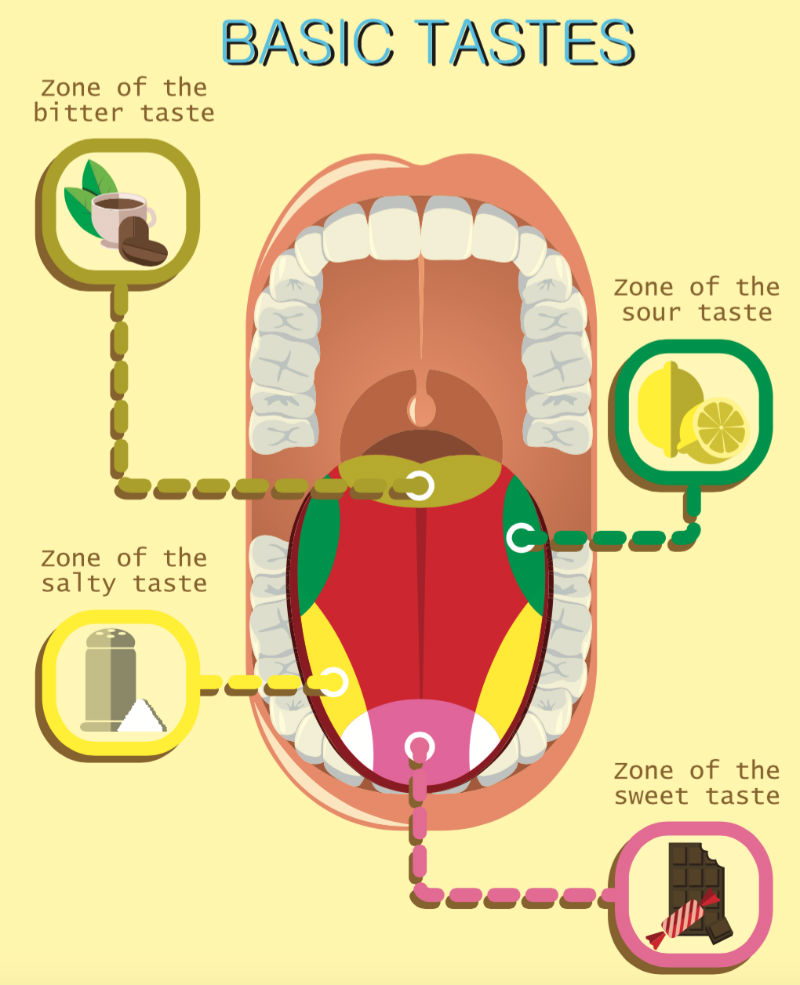 This error was because, according to Steven D. Munger from The Conversation, Boring got most of his data from a 1901 paper by a German scientist named David P. Hänig, who also failed to test for umami.

Hänig, unlike Boring, presented his information in a graph that was incredibly confusing to other researchers at the time, because it appeared to outline where tastes were picked up on the tongue. In reality, he was trying to show that areas of the tongue were slightly more sensitive to certain tastes than others, not that they were only sensed in these areas, which is a pretty big difference.

This misrepresented information was then picked up by Boring over 40 years later, when he illustrated the graph as a map of the tongue. Boring’s map also didn’t account for umami, which means that at its very best, it’s still incomplete, and also drove the public opinion that certain areas of the tongue were responsible for tasting certain flavours.

After all, it’s a very nice-looking map and is very easy to understand, especially for children. The only real problem with it is that it’s, you know, completely wrong. If you don’t believe it, put something bitter on the tip of your tongue or something sweet in the centre. If Boring’s map was correct, you wouldn’t taste these things because you placed them on the wrong spots.

After years and years of this image making its way into classrooms around the world, it became common knowledge. This is especially strange, considering that molecular biologists have doubted the map for years, and have proved time and time again that the tongue isn’t broken into sections. Old habits die hard, I guess.

Though there is still a lot about taste we don’t know, researchers are pretty certain that taste buds can detect multiple tastes, and yes, some are more sensitive to certain tastes than others. These taste buds all work together, which means that it’s okay if one area is more sensitive to salt while another is to sweetness - it all evens out.