Measuring the very, very big and the very, very small requires using units that can be hard to imagine. Keep these rough comparisons in mind next time you come across a mind-bending scale.

A parsec is a unit of length that measures long, long distances. It's typically used for objects far beyond our own Solar System.

The word parsec is a portmanteau for 'parallax arcsecond', and describes the distance from the Sun to an object that seems to shift by a set amount (called an arcsecond) against a background of stars as the Earth orbits. 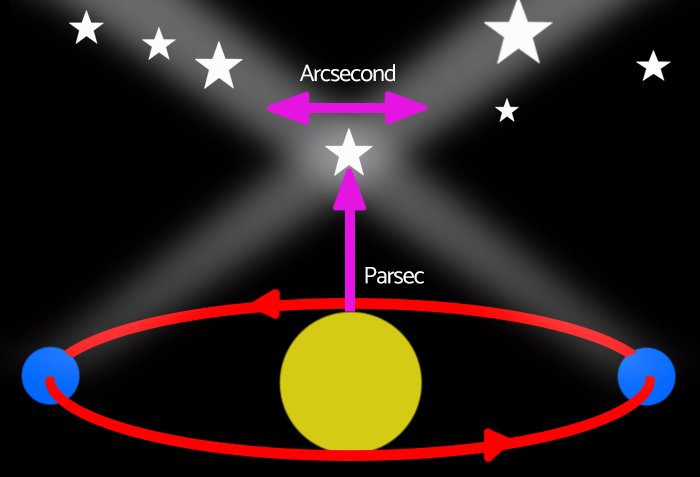 If you're still not sure how big that distance is, it'd take around 3.8 million years to fly this distance in an Airbus. Be sure to pack extra socks if you do.

Confusingly, a light-year sounds more like a unit of time than a distance. It is in fact the distance light covers in one year as it moves unobstructed through a vacuum. It's a number large enough to be useful for astronomical distances on the scale of stars.

Travel a single light-year from here, and you'd find yourself somewhere near the Solar System's very icy outer fringes of ice and dust called the Oort Cloud, or roughly a quarter of the way towards our closest neighbouring star.

If you could Uber your way out there, it would take your driver 10 billion years to cover that single light-year, which would set you back about $80 if it's off peak.

If you started cycling towards the Sun now, you could make it to its photosphere, about 1AU away, by around the year 3000. Maybe sooner if you don't skip leg day at the gym.

It's probably not a coincidence that the suffix 'nano' and the term 'nanna' sound so similar. In ancient Greek, nano is a term for a person of diminutive stature, and over the years, this term has come to describe very tiny measurements.

Nanotechnology, for example, deals with tiny chunks of materials less than 100 nanometres across, a scale where objects start to take on unique structural and optical properties.

To put that into perspective, a single nanometre is one billionth of a metre, which is tiny even for a grandma. The units are used to describe objects on the scale of large molecules and viruses. For example, a strand of DNA is about 2 nanometres across.

If you were just 200 nanometres tall, the cross section of a human hair lying on its side would stretch slightly taller than the Empire State Building. Possibly even higher if we're talking one of nanna's leg hairs.

To describe distances on the atomic scale you really need a small unit. Picometres handle these kinds of measurements, equalling just one trillionth (that's 0.000000000001) of a metre.

The radius of a hydrogen atom (measured from its electron to the centre) is just over 50 picometres across. Helium pulls in its electrons a little tighter, so it's size is closer to 31 picometres in radius.

If you were small enough to stare up at that building-sized cross section of a hair mentioned in the nanometre section above, a few picometres would be around the thickness of one of your own wispy hairs. Nothing some picogel couldn't fix.

Based on Einstein's special relativity, comparisons of time and distance between observers moving in different ways don't always match. Stranger still, in spite of disagreements, there is no 'right' measurement of each other's time and space.

There is an odd exception. Combining certain constants of nature that aren't relative, such as the speed of light, with the quantum description of electromagnetism (in joules per second) and the constant of gravitation can provide a unit that looks the same to everybody.

It's less a tool for measuring distances we might experience, and more a way to define the point at which current theories of gravity break down.

If a single footstep was a Planck length, and you were walking from a hydrogen's electron to the centre of the atom, the Universe would be long cold and dead by the time you arrived. Even if you ran like Usain Bolt the entire way.