How Common Treatments For Endometriosis Are Failing Those With Chronic Pain

When Lauren Gelfer found out she had endometriosis, she'd been in chronic pain for nearly nine years and her nervous system was completely overwhelmed.

Ever since she was 12, she'd been told her debilitating periods were normal, but something didn't seem quite right. As an adult, her symptoms only grew worse, until the pain in her body started to feel beyond her control.

"From that point on I was basically non-stop looking for answers, going to every single physician, every single specialty that one could ever imagine," Lauren told ScienceAlert. "I became quite obsessed with trying to understand what's happening to my body and quite convinced that this was not normal or okay."

Endometriosis is a highly common inflammatory condition and the leading cause of chronic pelvic pain. Exactly how the two are connected remains a mystery. Endometriosis, or endo for short, is marked by endometrial-like tissue (similar to the tissue that lines the uterus) growing outside the uterus, causing lesions that can be associated with intense pain in the pelvic cavity, although not in every case. 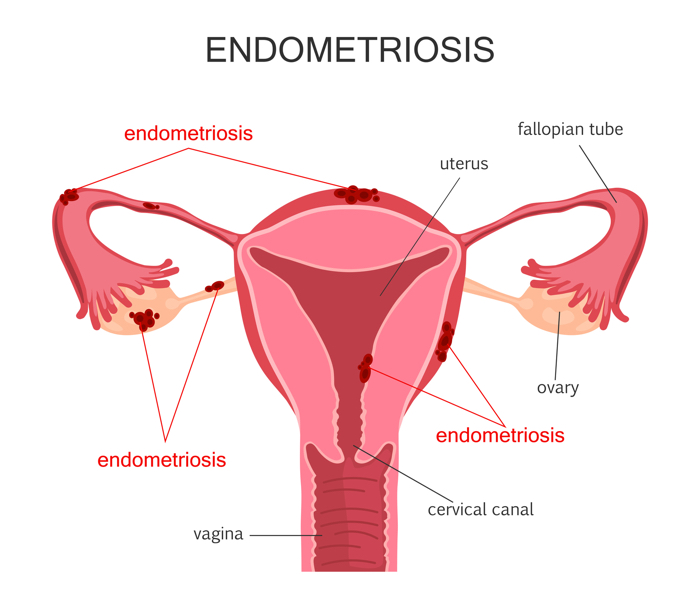 A diagram of endometriosis. (FancyTapis/Getty Images)

Despite impacting one in 10 women of reproductive age worldwide, there's currently no known cause or cure, only lifelong management. Meanwhile, funding for care and further research is significantly lacking, and the most common treatments don't work for everybody.

Today, surgery to remove endo lesions, along with hormones to reduce pain and stunt further lesion growth, are crucial steps for many patients, but they are not effective for everyone, and they come with potential risks of scar tissue and unwanted side effects.

What's more, because the symptoms of endo are not always confined to the uterus, some patients may continue experiencing painful sex and other debilitating problems in their bladder, abdomen, and bowels, even after having surgery to remove the lesions.

In Lauren's case, when she was referred to the British Columbia Centre for Pelvic Pain & Endometriosis in Canada, she wasn't even sure she had endometriosis – but her doctor was convinced by her symptoms, and her surgery proved him right.

In the end, Lauren is very glad she had the procedure, as it offered her a definitive diagnosis and some pain relief, but unfortunately her issues didn't end there.

After years of chronic pain leading up to the surgery, Lauren felt physically weak and mentally exhausted. Her pelvic floor was enormously tight, and she was still experiencing significant amounts of pain.

It was only when she started working on other aspects of her health that she saw significant shifts in her symptoms. Learning how to gradually desensitise her body with mindfulness, somatic therapy, and pelvic physiotherapy helped to change her life, she says.

"I still have pain, I still have flare-ups, I still have really bad days," Lauren says. "However, I think that my outlook has shifted, and I don't feel as caught up in the pain."

While Lauren's long path to diagnosis might sound extreme, it's hardly unusual within the experience of endometriosis patients. Today, research suggests the majority of doctors do not know how to recognise or properly treat endometriosis.

Part of that has to do with the mystery surrounding the disease itself. Currently, there are very few non-invasive biomarkers by which to define endo, and its key symptoms – pain and infertility – are subject to a bunch of other factors.

When few doctors know what to look for and often fail to recognise the disease in front of them, it's no surprise many patients wait between four and 11 years for a proper diagnosis. Not only can this erode doctor-patient trust, it can also impact a person's quality of life, increasing their pain awareness overall, even at sites unconnected to their condition. 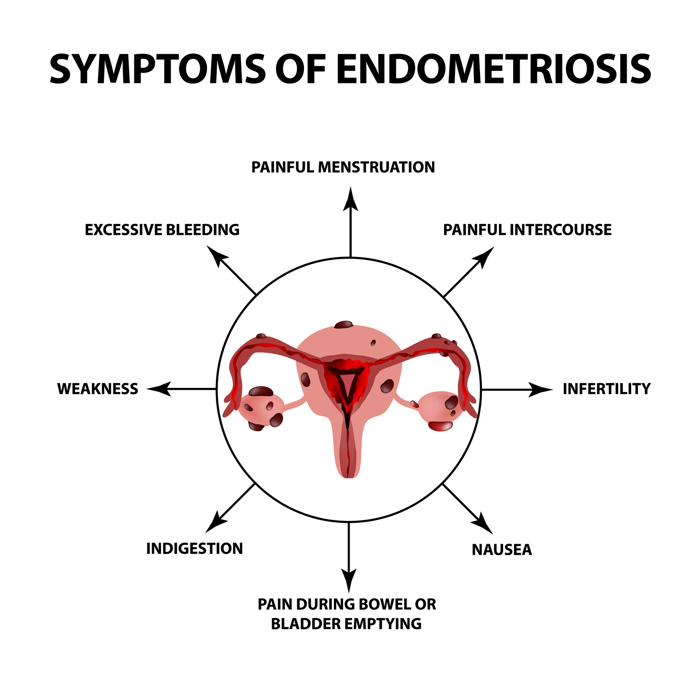 "Moreover," researchers wrote in a 2019 paper, "although the evidence is limited, failure of timely diagnosis and adequate endometriosis management may foster disease progression…  that may compromise fertility and increase the risk of central sensitisation and chronic pelvic pain."

Today, there's an emerging group of gynaecologists who think we have been too focused on treating the endometrial lesions and not focused enough on managing the associated pain.

In some cases, they say, when a person has been exposed to very intense episodes of uncontrollable pain for years on end, it might lead to changes within the nervous system itself, and we need to be able to treat that, too.

Catherine Allaire, the medical director and co-founder of the British Columbia clinic, refers to this as 'upregulating' – in very basic terms, that means the pain has migrated beyond the endometrial lesions to the brain or spinal cord, causing permanent biochemical changes.

Once this centralised pain state exists, some researchers think it might even start crossing over to other areas in the pelvis, like the bowels, abdominal wall, and bladder.

As you can imagine, these associated aches and pains can make diagnosis incredibly difficult, and one of the biggest hurdles has to do with our historical assumptions around pain itself.

Once, doctors used to think if there was pain, there must be a problem nearby. As it turns out, however, pain is not always a stable or accurate measure of tissue health; rather, it may act as a protective mechanism, and just like a growling guard dog, it can sometimes get triggered by non-threatening disturbances.

If this protective mechanism remains on high alert for too long, even when the threat is gone, it could cause more harm than good. Perhaps that's why some endo patients experience excruciating symptoms with just a few lesions, while others with severe endometriosis suffer little or no pain.

"We probably are doing exactly what we did to breast cancer, which is to treat everyone in exactly the same way with no surgery, or repeat surgery, or repeated medications," says Jason Abbott, an expert on the surgical treatment of endometriosis at the University of New South Wales in Australia. "And in actual fact, that's not what we should be doing at all. We should be trying to understand the sub-type of disease."

The problem is we need more research to figure out what those sub-types actually look like and how we can treat them most effectively, because the tools we have right now are limited and not thoroughly researched.

"In every other area of medicine, we understand that pain management is a really important aspect, and we seem to have forgotten that in endometriosis," Abbott says.

Allaire's interdisciplinary clinic was the first of its kind in Canada, and today, it focuses on new techniques to help treat and overcome the complex issue of chronic pain in endometriosis patients.

"When [patients are] at the point where everything is hurting, and they're hurting constantly, daily, and they're not responding to surgery or even medications, then we have to start addressing it as a complex pain problem," Allaire says.

Today, Allaire's centre is attempting to provide these many disciplines under one roof. At her outpatient clinic, patients receive a thorough clinical evaluation to identify all the potential contributors to their pain, working alongside gynaecologists, surgeons, physiotherapists, counsellors, nurses, and educators to develop a lifelong therapy plan, tailored to their personal needs and preferences.

Pain education is a crucial part, Allaire explains, because it helps empower the patient. It's not about accepting the pain, she says, but accepting that pain can be changed through mindfulness and movement.

As we have seen in other chronic pain patients, this knowledge can help people feel more in control. In fact, recent research suggests understanding pain can actually change how much things hurt.

After taking part in Allaire's clinic, Lauren says she has come to understand the pain she feels is really her body trying to warn her there's a threat, after years of unaddressed agony.

"When you're a young girl and you get your period and you're getting pain and you're told it's normal, that in and of itself is very traumatic," she says. "We're constantly denied, you know? I'm not saying that's what causes the pain, but I think it definitely adds to it."

Lauren knows she's incredibly fortunate. The clinic she attended now has a six-month waiting list, and there are few other alternatives in Canada, or elsewhere for that matter. Even in Australia, the only country in the world with a national action plan for endometriosis, there still aren't enough services like this for patients dealing with chronic pelvic pain, although progress is slowly being made.

"[These patients are] the ones that tend to be at a loss for getting help in the community," says Allaire, "because the only tools that are out there in the general [obstetrics and gynaecology] community is surgery or medications."

Suzie As-sanie, an expert in chronic pelvic pain at the University of Michigan, thinks this might be why some patients are undergoing multiple excisions year after year with little to no relief - when what they really need, she argues, is a more integrated approach to their pain and the other factors that could be contributing to it.

Last year, As-Sanie told ScienceAlert how some desperate endometriosis patients end up being given opioids for their pain, in lieu of real, long-term pain management.

In 2014, her research group published some of the first brain imaging studies to validate the idea of central pain amplification in chronic pelvic pain, potentially explaining why some patients do not respond to therapies designed to get rid of their endo lesions.

"Surgeons forget that there's a whole woman attached to those endometriosis lesions," Abbott says, "and they need to treat the woman, not just the lesions."

Lauren still sees her gynaecologist at times and contemplates having another surgery. She knows the statistics though – up to 40 percent of patients relapse again in five years – and she's not sure if she wants to risk the possible scar tissue.

"At this point for me, I just feel like I'm not ready to do that," Lauren says. "Because I've seen so much progress through just working on my physical and mental health holistically. I am a little bit terrified of surgery."

Lauren knows her story isn't true of all those with endometriosis. She says if she didn't live in a place with subsidised healthcare for these lifelong treatments, she would absolutely consider another operation.

While having another excision isn't necessarily a bad decision – especially if the patient responded well to the first operation – it doesn't guarantee the disease won't return, and we don't know much about the potential risks of repeat excisions, which many patients are currently having.

"When there aren't many options, and you're desperately in pain, it's far more likely that you would agree to another surgery," Lauren says. "For me, I actually did see benefit from my first surgery. I think it did do something. It just wasn't the entire thing that I had really hoped for."