An object 681 million light-years away might look like one glorious, exquisite mess, but there's a lot more going on that a first glance indicates.

The object showcased in a new Hubble image – called IC 2431 – is not one galaxy, but three, coming together in a massive galactic merger that will one day end up as one huge galaxy, bearing the scars of its cataclysmic encounter.

Such objects can help us understand how massive galaxies grow and evolve over millions and billions of years, and how our Universe will continue to change in the eons to come.

Galactic mergers might seem like they ought to be rare, given how much space there is out there, but they appear to be a pretty integral part of the process of galactic evolution.

The Milky Way, for instance, has undergone multiple galactic mergers in its 13.6 billion-year history. Astronomers think that galaxies are gravitationally drawn together, perhaps channeled along strands of the invisible cosmic web that stretches across and plays a vital role in shaping the Universe, into clusters that slowly merge. 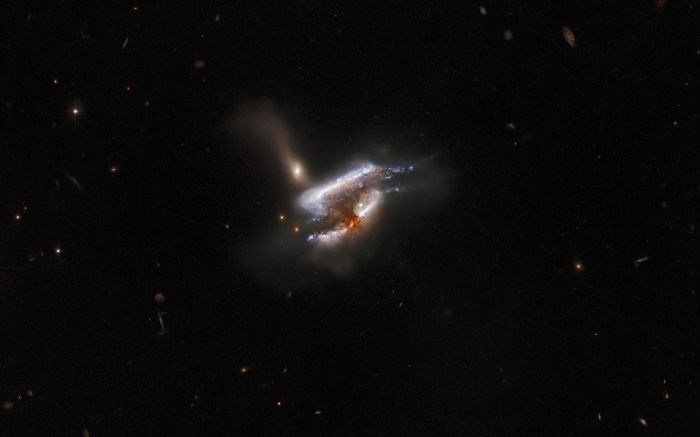 These collisions cause gravitational disruptions that shock and compress star-forming gas in the galaxies, triggering waves of star formation as dense clumps in the material collapse under their own gravity to form baby stars.

A galaxy whose star formation rates are flagging is likely to see a flurry of starburst activity during and following an interaction with another galaxy.

Binary galactic collisions are the most commonly observed galactic mergers, but there are a number of triple mergers out there too.

These aren't always easy to spot, depending on how complete the merger is.

At the later stages of a merger, the supermassive black holes at the centers of each galaxy become mutually drawn together and are locked in a binary or trinary orbit. As we have seen, sometimes one or more of these black holes can be obscured by dust.

Astronomers think that, eventually, these black holes will also merge, forming one huge chonk of a supermassive black hole. We haven't detected the gravitational wave signals of one of these colossal mergers, but that might be because they occur at a frequency that is outside the range of our current detectors.

The more of these smash-ups we identify, the better we'll be able to understand how they take place, and model how they roll out over millions of years.