An enormous impact crater, hiding deep beneath Greenland's Hiawatha glacier, is probably the result of a kilometer-wide asteroid that crashed into Earth 58 million years ago.

That's much older than scientists presumed – roughly eight million years after the infamous impact that killed off most dinosaurs.

When the Hiawatha crater was first discovered in 2015, researchers suspected it was made by a meteorite sometime between 12,000 years ago and three million years ago.

These dates roughly bookend the last ice age, and judging from the conditions of the crater, the asteroid that created it seemed to have crashed into an already formed ice sheet.

But that's mostly based on circumstantial evidence, like radar scanning. In the years since the 31-kilometer-wide indent (19.3 miles) was first discovered, researchers have been trying to figure out its true age.

Given that much of the evidence lies beneath a kilometer of ice, however, direct evidence has proved difficult to gather.

Using two different dating methods, researchers from Denmark and Sweden have now both landed on a similar date – one that experts weren't expecting.

"Determining the new age of the crater surprised us all," says geologist Michael Storey from Denmark's Natural History Museum.

"I'm convinced that we've determined the crater's actual age, which is much older than many people once thought." An outline of the Hiawatha impact crater from above. (Natural History Museum of Denmark)

The evidence comes from riverbanks downstream of the Hiawatha glacier, which carry rocks and sand from the bedrock beneath the ice sheet out into the open. These melt rock samples can then be used to date the impact event.

In Sweden, researchers at the nation's Museum of Natural History focused on the riverbank's rocks, which contain the mineral zircon. When this mineral is impacted by a meteorite, it forms new crystals, which incorporate the radioactive element uranium while rejecting lead.

As such, the ratio of uranium to lead can reveal the age at which this crystallization began.

Meanwhile, in Denmark, researchers relied on a technique called argon-argon dating. By heating sand collected downstream of the glacier with a laser, the team was able to release argon gas from individual grains.

The isotopes of this gas were then used to determine how much radioactive decay had occurred since the moment the minerals melted from the meteorite's impact.

The argon-argon method suggests the Hiawatha asteroid struck Earth in the late Paleocene, sometime between 56 and 66 million years ago, while the uranium-lead technique landed on a date 58 million years in the past. 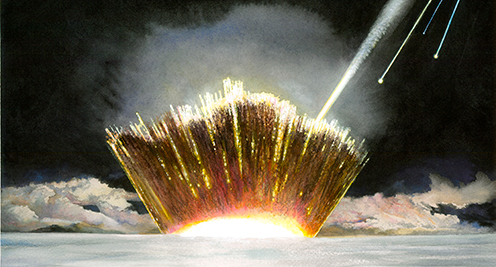 An illustration of what the Hiawatha impact might have looked like if it had crashed into ice. (Carl Christian Tofte)

The Hiawatha crater is nearly six times smaller than the Chicxulub crater in Mexico, which means it would not have been nearly as disastrous as the event that drove dinosaurs to extinction eight million years previous.

That said, the Hiawatha impact would have caused an impact a million times more powerful than an atomic bomb, which is more than powerful enough to impact the local or even global climate of the time.

In the late Pleistocene, Greenland would not have looked anything like today. The Arctic island was probably home to a temperate rainforest with an abundance of animal life.

Researchers are now investigating how the Hiawatha meteorite may have altered this ecosystem and its climate millions of years ago.