New research suggests the human eye and brain are capable of seeing ghosted images, a new type of visual phenomenon that scientists previously thought could only be detected by a computer. It turns out our eyes are more powerful than we thought.

The discovery could teach us more about the inner workings of the eye and brain and how they process information, as well as changing our thinking on what we human beings can truly see of the world around us.

Having been developed as a way of low-cost image capture for light outside the visible spectrum, the patterns produced by these ghosted images are usually processed by software algorithms – but, surprisingly, our eyes have the same capabilities.

"Ghost-imaging with the eye opens up a number of completely novel applications such as extending human vision into invisible wavelength regimes in real-time, bypassing intermediary screens or computational steps," write the researchers.

"Perhaps even more interesting are the opportunities that ghost imaging offers for exploring neurological processes."

Ghost imaging works using a camera with a single pixel, rather than the millions of pixels used by the sensors inside today's digital cameras and smartphones. When it comes to capturing light beyond the visible spectrum, it's even a more cost-effective method.

These single pixel cameras capture light as it reflects from an object – by watching different random patterns of bouncing light, and crunching through some calculations, the camera can gradually build up a picture of something even with just one pixel.

In some setups, the single pixel camera is used in combination with a second light, modulated in response to the first, and beamed back on the original random patterns. The advantage is that fewer patterns are needed to produce an image.

In this case a second camera using some smart algorithms can pick up the image without having looked at the object at all – just by looking at the patterns being cast and the light being produced from them.

That's the ghosted image that was previously thought to only be visible to computers running specialist software. However, the new study shows the human visual perception can make sense of these patterns, called Hadamard patterns.

This diagram from the research paper should give you an idea of what's happening: 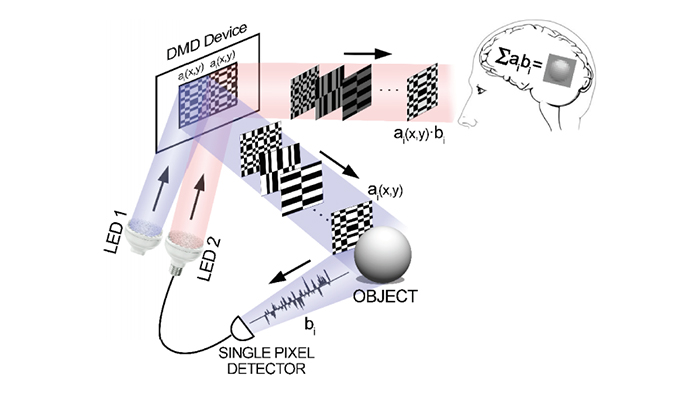 It's a little bit like when our eyes and brains look at a series of still images and treat them as a moving picture – the same sort of subconscious processing seems to be going on.

Of the four volunteers who took part in the study, all four could make out an image of Albert Einstein sticking out his tongue from the Hadamard patterns. Interestingly, though, the illusion only appeared when the patterns were projected quickly enough.

If the rate dropped below 200 patterns per 20 milliseconds, the image couldn't be seen by the study participants.

As the researchers point out, this is potentially hugely exciting – it means we might be able to devise simple systems to see light outside the visible spectrum, with no computer processing required in the middle.

That's all to come - and this is really preliminary stuff, so we can't get too carried away. For now, the team of researchers is using the findings to explore more about how our visual systems work, and whether our eyes and brains have yet-undiscovered superpowers for looking at the world around us.

The research has yet to be peer-reviewed, but you can read it on the pre-print resource Arxiv.