Hydrogen Bonds Have Been Directly Detected For The First Time

For the first time ever, physicists have managed to directly detect a hydrogen bond within a single molecule - meaning we can now observe the smallest and most abundant element in the Universe in ways that scientists could only ever theorise about.

The experiment also reveals just how sensitive our imaging devices have become - hydrogen bonds are far weaker than chemical bonds, and until now, it's been impossible to see them. Now, scientists can visualise them so clearly using an atomic force microscope, they can measure their exact force.

Of all the elements in the Universe that scientists are striving to get better grasp on, hydrogen is arguably at the top of the pile.

It easily forms compounds with nearly all non-metallic elements on the periodic table, and its bonds with oxygen and carbon are why any of us exist at all.

You can also thank hydrogen bonds for your very stable DNA double helix structure - millions of hydrogen bonds are the reason your DNA base pairs stay intact, which means it really is one of the fundamental building blocks of life as we know it.

"The hydrogen atom - the smallest and most abundant atom - is of utmost importance in physics and chemistry," say researchers from the University of Basel's Swiss Nanoscience Institute.

"Although many analysis methods have been applied to its study, direct observation of hydrogen atoms in a single molecule remains largely unexplored."

Using hydrogen compounds called propellane with configurations that resemble a propeller, the Swiss team has successfully measured the force and distance between an oxygen atom and two hydrogen atoms.

"The direct measurement of the interaction with a hydrogen atom paves the way for the identification of three-dimensional molecules such as DNAs and polymers."

So how did they do it?

They selected hydrocarbon compounds that always arrange themselves to have two hydrogen atoms pointing upwards.

You can see the side-on view of the propeller shape here, with the hydrogen atoms in white (the second hydrogen bond pointing upwards is obstructed behind the first one):

The team then subjected this molecule to an atomic force microscope (AFM), which is a very high-resolution type of scanning probe microscopy that's able to visualise and measure minuscule forces.

They augmented the tip of the microscope with carbon monoxide, which made it extremely sensitive to hydrogen. When the tip was brought close enough to these hydrogen atoms, hydrogen bonds were formed in a way that they could be directly examined.

In this image, you can see both hydrogen atoms pointing upwards: 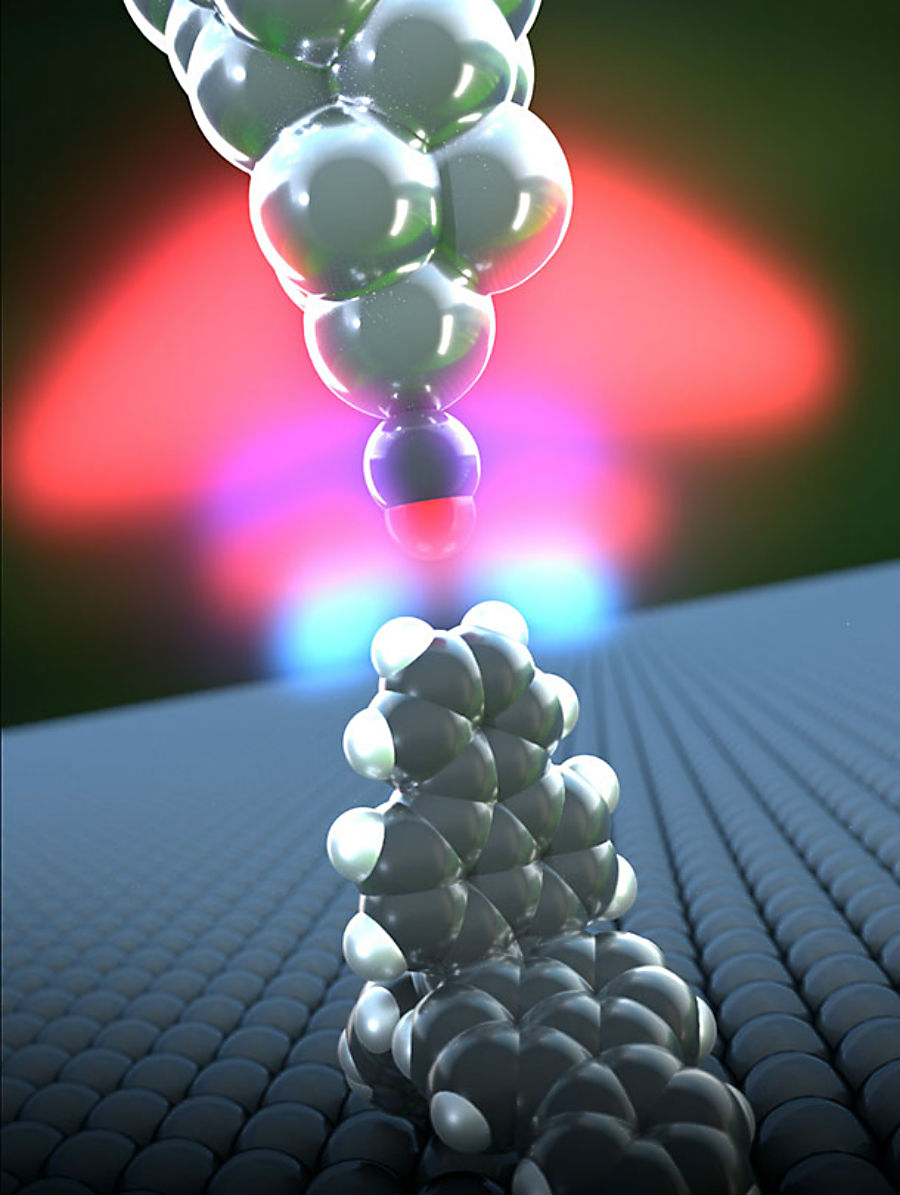 You can see this in the above illustration, with the carbon monoxide tip above forming a bond with the hydrocarbon 'propellane' compound below.

When the researchers compared their results to established calculations of hydrogen bonds in this kind of molecule, they matched exactly.

As the researchers point out, "[H]ydrocarbons are one of the most varied and functionalised products at the heart of engineering, chemistry, and life, and hydrogen is often critical in their function."

Now that we can directly measure hydrogen bonds, we're about to see one of the most fundamental building blocks of the Universe in a whole new light, and we can't wait to see where this next-level physics takes us next.