In All of Human History, Have Any Societies Truly Lived Underground?

From ancient catacombs to modern subways, humans have always traveled underground for brief amounts of time. But have entire societies of people ever lived underground?

Yes, but historically only during emergencies and when they have had no other option. In recent decades, however, that has begun to change.

"The thing that is important to know about the underground is that we do not belong there. Biologically, physiologically, our bodies are just not designed for life underground," said Will Hunt, author of the book Underground: A Human History of the Worlds Beneath Our Feet (Random House, 2019).

"And yet there are moments when we have retreated underground."

Related: When did humans discover how to use fire?

People throughout history have temporarily lived below the surface for various reasons. If there were no materials to build houses with, they dug subterranean homes, Hunt told Live Science.

In places with extreme climates, people went beneath the earth in the summer to stay cool and in the winter to stay warm. Underground was also a safe place to hide from enemies.

For example, ancient people built the famous underground cities of Cappadocia in what is now Turkey, for protection against both weather and war.

"They were geographically in a very strategic place," Hunt said. "They were constantly being attacked."

The inhabitants retreated below ground during emergencies, but they didn't stay there for a long time, perhaps for weeks at a time.

One of the largest underground cities in Cappadocia is Derinkuyu, which dates to around the 7th or 8th centuries and could have housed about 20,000 people, according to Atlas Obscura. 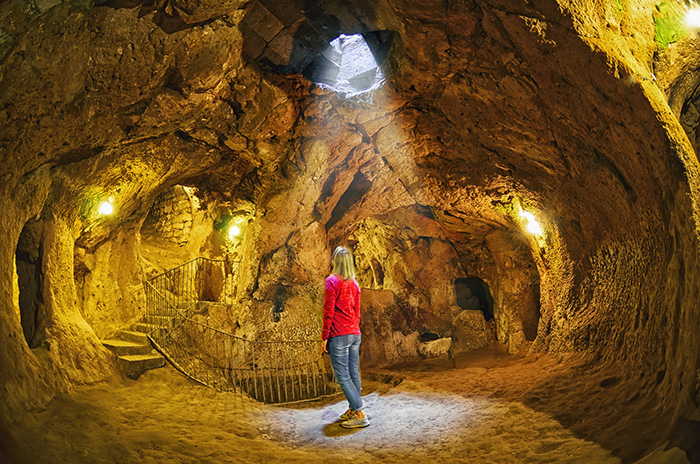 Geophysicists have found that another recently discovered city in the region spans 5 million square feet (460,000 square meters) and may be 371 feet (113 m) deep, according to National Geographic. If true, this would make the recently found Cappadocia city about a third larger than Derinkuyu.

The underground cities of Cappadocia are an "architectural marvel," Hunt said. Wells plunged deep into the water table. Holes leading up to the surface acted as ventilation shafts. Layers of protection – including large, circular stones that the ancient people rolled in front of entrances to the city – separated those inside from invaders on the surface.

Not all subterranean dwellings were as complex as those in Cappadocia, however. People also lived in natural and human-made caves, Hunt noted. Constructed caverns can be found anywhere with the right kind of geology – for example, stone hills made from puff, a soft volcanic rock that's easy to dig into. 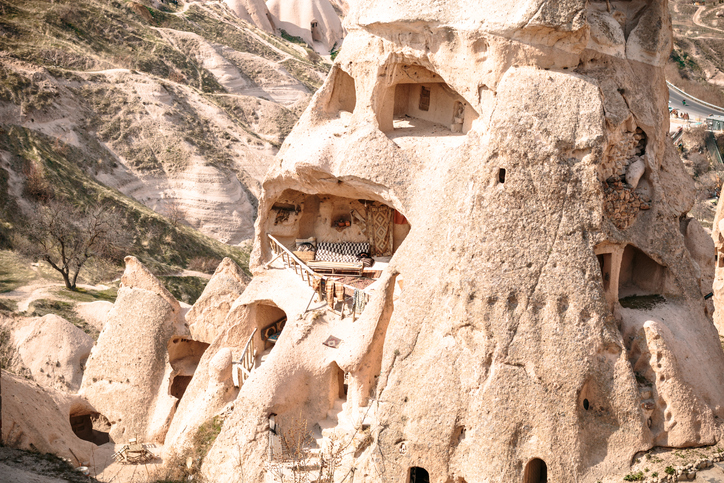 "They're very common," he said. "You find people making cave dwellings all over the world."

Even in modern day Australia, in a town called Coober Pedy, about half the population live in "dugouts", or holes carved into the sides of hills, according to Smithsonian magazine.

Many marginalized people have found shelter below the surface in abandoned infrastructure of modern cities. Related: How did people wake up before alarm clocks?

As more people move to cities, more of those city-dwellers may move underground. Places such as Singapore are exploring options for building downward.

The technology needed to do so is already here, said Eun Hee Lee, an assistant professor of psychology at the University of Nottingham's Malaysia campus, who studies the psychology of being underground. The challenge is convincing people to move underground.

In reality, being beneath the earth hasn't yet been shown to cause negative psychological effects, as long as lighting, room size, ceiling height, and other physical attributes of the setting are consistent with above ground, Lee said.

For example, technology such as light wells, which allow natural sunlight to brighten underground spaces using materials such as reflective paint, could fight depression that arises from a lack of sunlight. People may feel isolated from their counterparts on the surface, and they may feel a lack of control, but these feelings are manageable, Lee said.

However, people still dislike the idea of living below ground.

In any case, Lee thinks people worldwide will start to make the move before long, inspired by places that are paving the way, such as RÉSO, an underground city in Montreal, Canada that is more than 20 miles long and includes shopping malls, offices, hotels, and schools.

What did people use before toilet paper was invented?

How did nearsighted people manage before glasses were invented?

Why was whaling so big in the 19th century?