A new study has found no link between age and the most impactful scientific discoveries, showing that you can be successful in science no matter where you are in your career.

The research charted published papers against the overall career span of more than 10,000 scientists, and found that "high-impact papers" (those with many citations) occurred at many different points along the timelines.

That means major studies making the largest impact were just as likely to come in a scientist's first paper as their last one, or anywhere in between.

But the data also showed that persistence is hugely important, so it's a case of try, try again if you want to make your name in your chosen field.

"We were astonished at what we found," said one of the researchers, Roberta Sinatra from Northeastern University.

The team assessed scientists and their published work across seven disciplines, including physics, chemistry, economics, and cognitive science, concentrating on researchers with a career spanning at least 20 years.

Papers in journals published under the Physical Review umbrella between 1893 and 2000 were added to data collected from Google Scholar and Web of Science online. 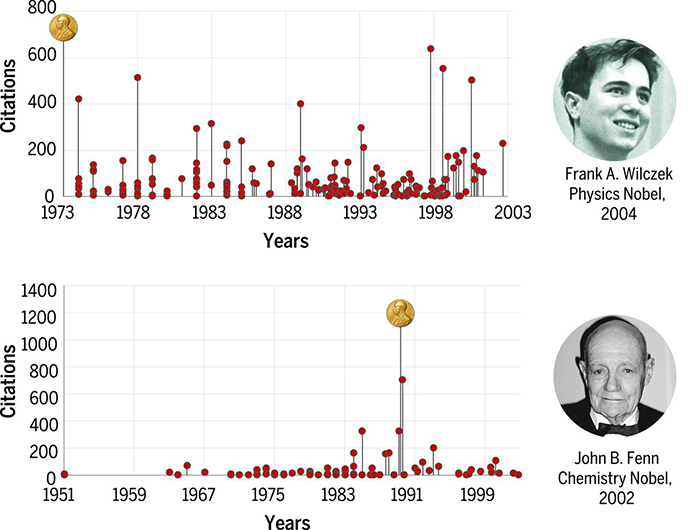 To come up with a measure of success for a paper, three variables were used: luck, productivity, and "magnitude of sustainable impact" - or how often a work was mentioned by other scientists. That final variable was assigned the letter Q.

Luck was related to persistence, like buying lottery tickets or rolling a die. "The more times you try, the better your chances," explains Sinatra.

Productivity was based on how many papers each scientist had published, while the Q factor - the impact of these papers - represented a person's ability to maximise a study's wider influence.

"The Q factor captures a combination of ability, education, and knowledge,"says lead researcher Albert-​​​​László Barabási. "That is, how good is a scientist at picking an idea and turning it into a discovery."

That Q factor was found to remain mostly constant throughout a scientist's career, which is at odds with the idea that scientists become more likely to have a 'big hit' as they get more experienced later in their careers.

The Q factor could actually help predict major scientific discoveries in the future, the researchers suggest. For example, if someone with a high Q level is getting consistent results and continuing to publish regularly, a high-impact paper should just be a matter of time.

Using the data, Northeastern University artist and designer Mauro Martino also built a cool visualisation that highlights just how randomly success can strike over the course of a scientific career.

The introductory video for the visualisation is below, and you can see more here:

Now the researchers want to look more closely at their Q variable and identify the factors that influence it.

"Understanding the laws and the patterns that govern our careers could significantly enhance scientific output," says Barabási.

"It may also help identify and nurture individuals who are poised to make big discoveries and encourage the scientific community to offer them the resources and opportunity to do so."

The moral of the story is don't give up – and don't let anyone tell you you can't make a difference. You're never too young or too old to make your mark in science.

The study has now been published in Nature.