To human eyes, Saturn's moon Enceladus looks relatively plain. Shift the wavelength away from the optical, however, and Enceladus starts to look a lot more interesting, as new images amply demonstrate.

Although its surface is scored with deep chasms and gorges, Enceladus seems fairly uniform otherwise, with a glistening white ice shell, like a giant snowball in space.

In infrared wavelengths, astronomers have discovered that much of the ice over the entirety of the moon is fresh, suggesting there might be global internal activity resurfacing the moon.

We've known for a little while now that Enceladus isn't necessarily a quiet place. In 2005, Saturn probe Cassini discovered plumes of salty water shooting out of four huge parallel chasms in the moon's south pole, nicknamed the "tiger stripes". Cassini went on to map over 100 geysers in the tiger stripe fractures.

These fractures are generated by tidal forces on the moon as it makes its eccentric orbit around Saturn. The planet pulls and stretches Enceladus, giving rise to internal heating and geothermal activity, and creating cracks in the surface ice at the south pole. The geysers spew out water from the interior, kept liquid by the internal heating; this water sprays over the surface and freezes, creating a new layer of ice.

So, in infrared images from newly reanalysed data generated by Cassini's Visual and Infrared Mapping Spectrometer (VIMS) - the spacecraft's mission ended in September 2017, but its legacy lives on - it was to be expected you'd find light consistent with fresh ice, reflecting off the region around the tiger stripes. 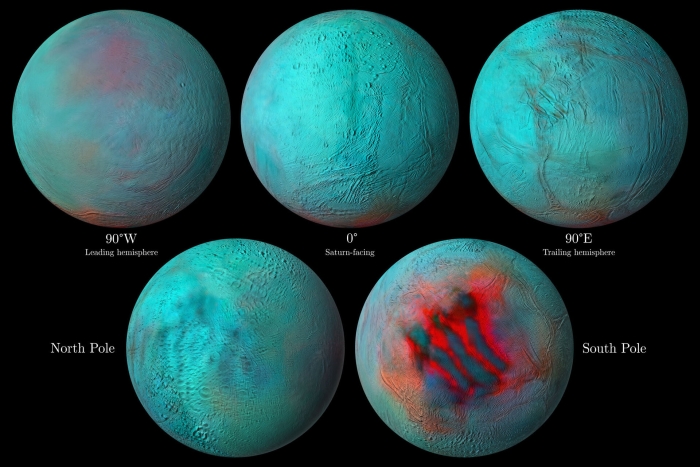 Sure enough, the highly detailed images, compiled from 23 close flybys, show persistent resurfacing. You can see it in the image above, and you can explore an interactive globe here - the bright red regions around the tiger stripes indicate the spectral signature of crystalline ice, in which the molecules are ordered in a neat, repeating geometric lattice; it reflects infrared light differently from amorphous ice, with disordered higgledy-piggledy molecules.

This matters. Almost all natural ice on Earth is crystalline - but almost all the ice we detect in space is amorphous. This is because temperatures in space tend to be very low, and at very low temperatures, water molecules collide and freeze into place.

Crystalline ice, on the other hand, indicates that the water has been relatively warm, above about 110 Kelvin - even after freezing, the molecules retain enough thermal energy to move into a crystalline configuration. So, when you see crystalline ice in space, you can draw certain inferences about its thermal history.

Most of the ice on the surface of Enceladus is crystalline, but the level of crystallinity is important. If we find ice that is more crystalline than the ice around it, we can assume it formed from warmer water - such as the ice and water freshly spewed out from the interior by way of geysers in the tiger stripes.

But that's not all. What the team led by Rozenn Robidel of the University of Nantes in France did not expect to find was a spectral signature of crystalline ice distributed broadly across the globe of Enceladus, including the north pole, which does not have tiger stripes.

This unexpected finding suggests that geological activity has occurred on both hemispheres, and that the northern hemisphere has undergone similar resurfacing to the southern, although the mechanism may be different - a more gradual fracturing of the crust.

Since such activity is likely related to seafloor hotspots, and such hotspots are likely to have a lifespan of only a few million years, that allows us to infer the age of the surface in these regions.

"The infrared shows us that the surface of the south pole is young, which is not a surprise because we knew about the jets that blast icy material there," said astronomer Gabriel Tobie of the University of Nantes.

"Now, thanks to these infrared eyes, you can go back in time and say that one large region in the northern hemisphere appears also young and was probably active not that long ago, in geologic timelines."

The team plans to apply their analysis techniques to data obtained in the upcoming Juice and Europa Clipper missions, to see what they can learn about Jupiter's icy moons Ganymede and Europa.

The research has been published in Icarus.