Before Its Death, Cassini Has Sent Us The Closest-Ever View of Saturn's Rings

In the months leading up to its final flight on 15 September, Cassini has been working like mad. Since April, it has swooped in between Saturn and its rings dozens of times, sending back photos that show us both in unprecedented detail.

It's just completed its last full orbit, according to the schedule, and is on track to plunge deep into Saturn and vanish forever. But that doesn't mean Cassini's work is done.

It's still sending images and other data, and will keep on sending data right up until the very end. And NASA has just released two images of Saturn's B ring like we've never seen it before.

The first image, taken on 4 June, is a detailed black-and-white image of rippled structure on the inner section of the ring. 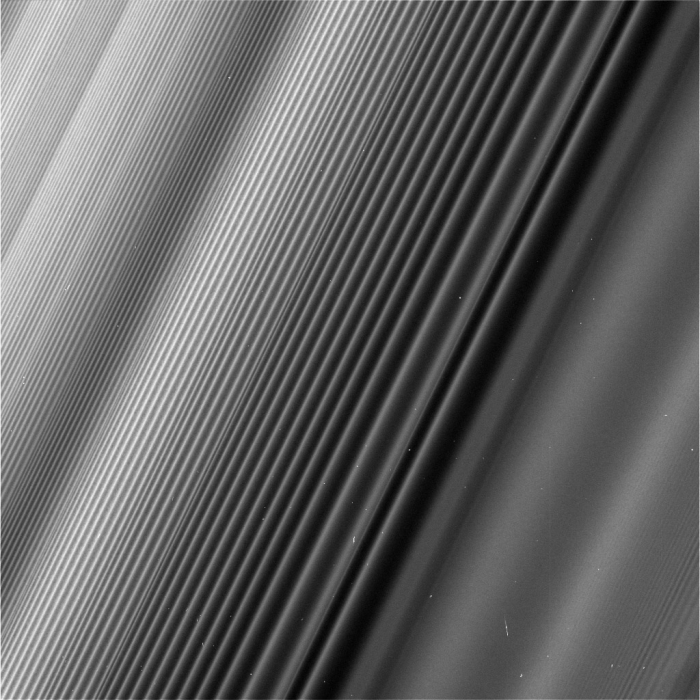 This is called the Janus 2:1 spiral density wave, so named because it's generated by Janus, which orbits Saturn just outside its A ring.

As well as shepherding the outer edge of the A ring with its co-orbital moon Epithemeus, Janus has an orbital resonance with the particles in the ring. For every orbit Janus completes, the ring particles complete two. This creates a spiral rippling out. In fact, it's the same mechanism that causes the arms of spiral galaxies to form.

The ripples aren't uniform in width. The farther they are from Janus, their propagating influence, the closer together they grow. Although the image appears to be angling away from the bottom right, all sections of the ring are equidistant from the camera - approximately 76,000 kilometres (47,000 miles) from Cassini.

Although it is named for Janus, the ripples wouldn't happen without Epithemeus either. The two moons orbit Saturn at almost exactly the same rate. Every four years, the rear moon catches up and overtakes the moon in front. This is co-orbiting. Whenever this happens, a new ripple forms in the spiral.

The distance between each ripple is equal to four years' worth of wave propagation from the source. It's a bit like the rings of a tree trunk, with each ring encoding the orbital history of the two moons. The rings in the top left, JPL-NASA calculated, date back to 1980 and 1981, when the Voyager spacecrafts were flying by Saturn.

The second image, taken on 6 July, is the highest-resolution image of any part of Saturn's rings to date, at a scale of about 3 kilometres (2 miles) per pixel.

The image is a colour composite mosaic, created from images taken using red, green and blue spectral filters. The bands have exceptionally sharp edges, according to Cassini radio measurements, and range from between about 40 kilometres (25 miles) wide for the smaller ones in the middle to about 300 to 500 kilometres (200 to 300 miles) for the thicker bands.

What gives the band their different colours and brightnesses is not known. The rings are mostly water and ice. The brightness could be affected by the density of the particles, particle abundance and shadowing - scientists hope to find out more by new observations taken by Cassini before it goes.

Cassini's final plunge commences on 12 September at 5:27am UTC. It's scheduled to enter Saturn's atmosphere on 15 September at 10:31am UTC. It will continue taking data and transmitting it back to Earth until it malfunctions or communications fail.