PHOTOS: NASA's Cassini Probe Just Got Closer to Saturn Than Ever Before

NASA's Cassini probe is plunging to its death. The nuclear-powered spacecraft has orbited Saturn for 13 years, and sent back hundreds of thousands of images.

The photos include close-ups of the gaseous giant, its famous rings, and its enigmatic moons - including Titan, which has its own atmosphere, and icy Enceladus, which has a subsurface ocean that could conceivably harbour microbial life.

To prevent Cassini from crashing into and contaminating any of those hidden oceans, the space agency has directed the craft, which is running out of fuel, onto a crash course with Saturn.

On Monday, the space probe conducted the first of its final five orbits around the planet, dipping into Saturn's atmosphere, according to NASA. It's all part of the "Grand Finale" for the US$3.26-billion, 20-year mission, which will end on September 15 as the spacecraft dives to its demise and burns up like a meteor.

"As it makes these five dips into Saturn, followed by its final plunge, Cassini will become the first Saturn atmospheric probe," Linda Spilker, Cassini project scientist at JPL, said in a press release.

"It's long been a goal in planetary exploration to send a dedicated probe into the atmosphere of Saturn, and we're laying the groundwork for future exploration with this first foray."

These last passes will reveal new data about Saturn, its atmosphere and clouds, the materials making up its rings, and the mysterious gravity and magnetic fields of the gas planet.

"It's Cassini's blaze of glory," Spilker previously told Business Insider. "It will be doing science until the very last second."

Here's what the probe's final spiral is revealing so far.

Gravity from Titan, Saturn's planet-sized moon, plays a key role in Cassini's final orbits. NASA is using the force to bend Cassini's course, a task that would otherwise require large amounts of fuel. 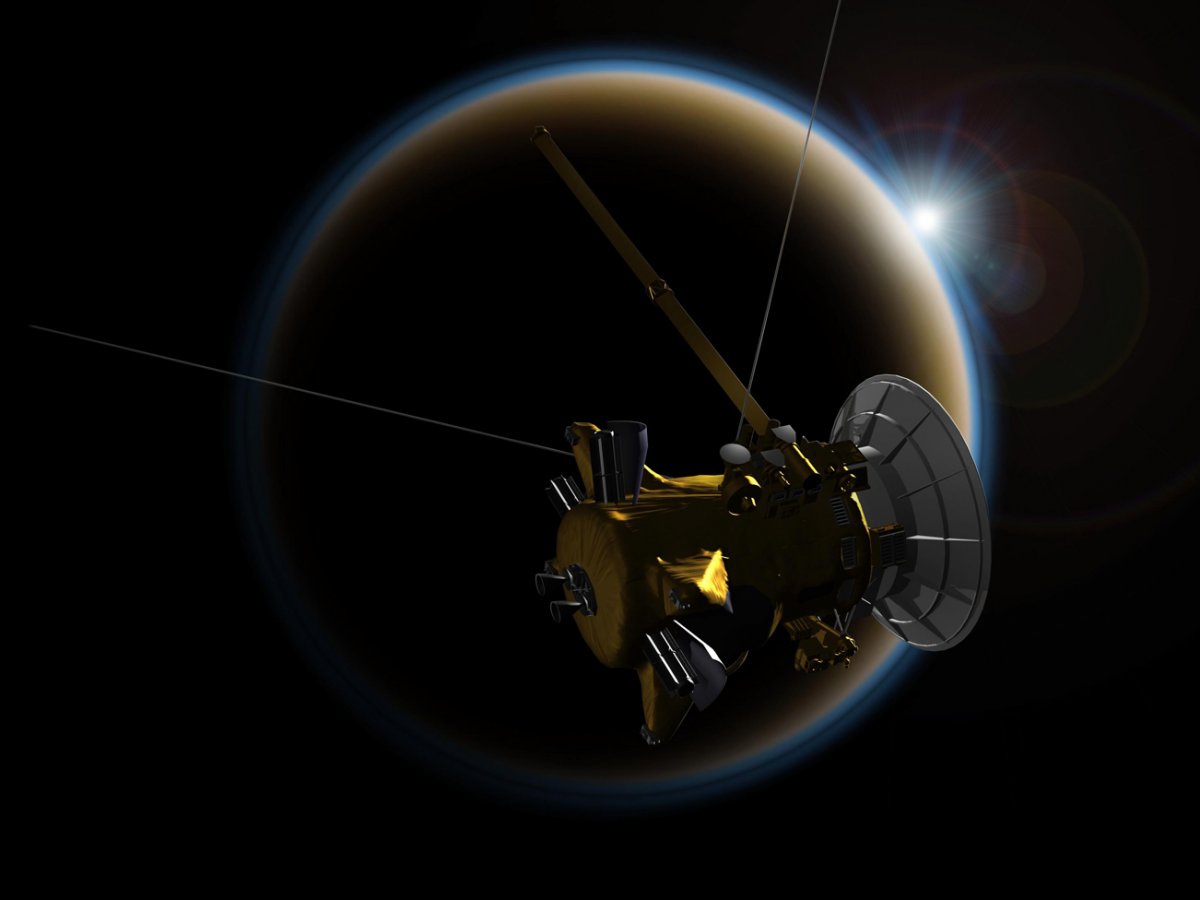 Above is an artist rendering of NASA's Cassini spacecraft observing a sunset through the hazy atmosphere of Titan, Saturn's largest moon.

These two views of Titan show the new details about the moon's surface - including clouds and hazes in its atmosphere - that Cassini has revealed: 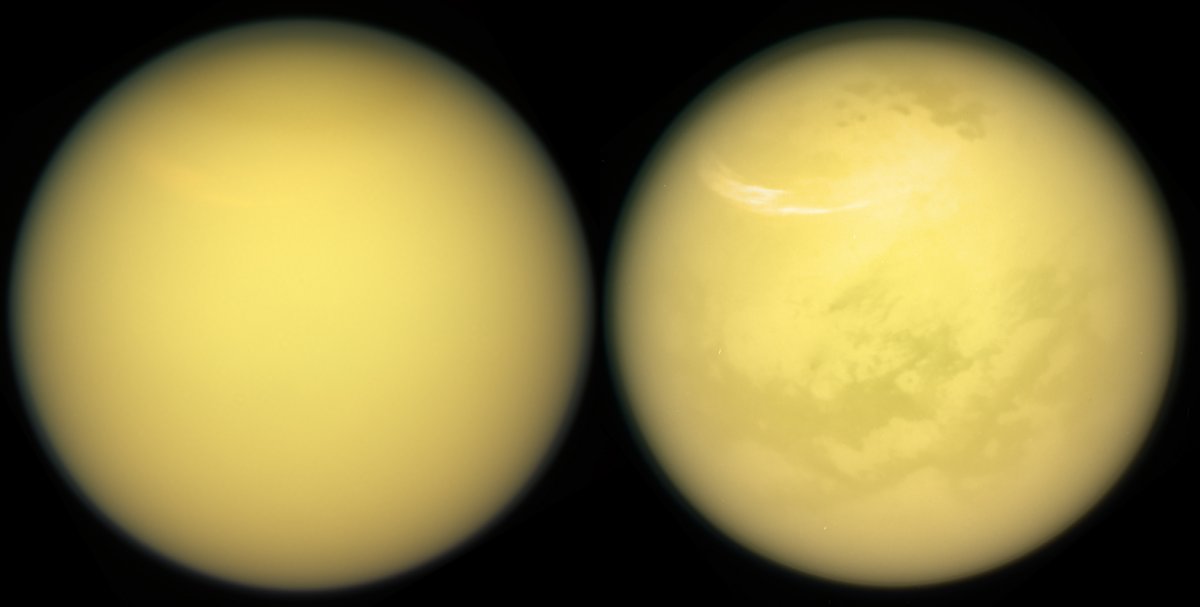 The first of the probe's final five orbits took it between the rings and the planet itself. Data from that fly-by is being sent back to NASA today. 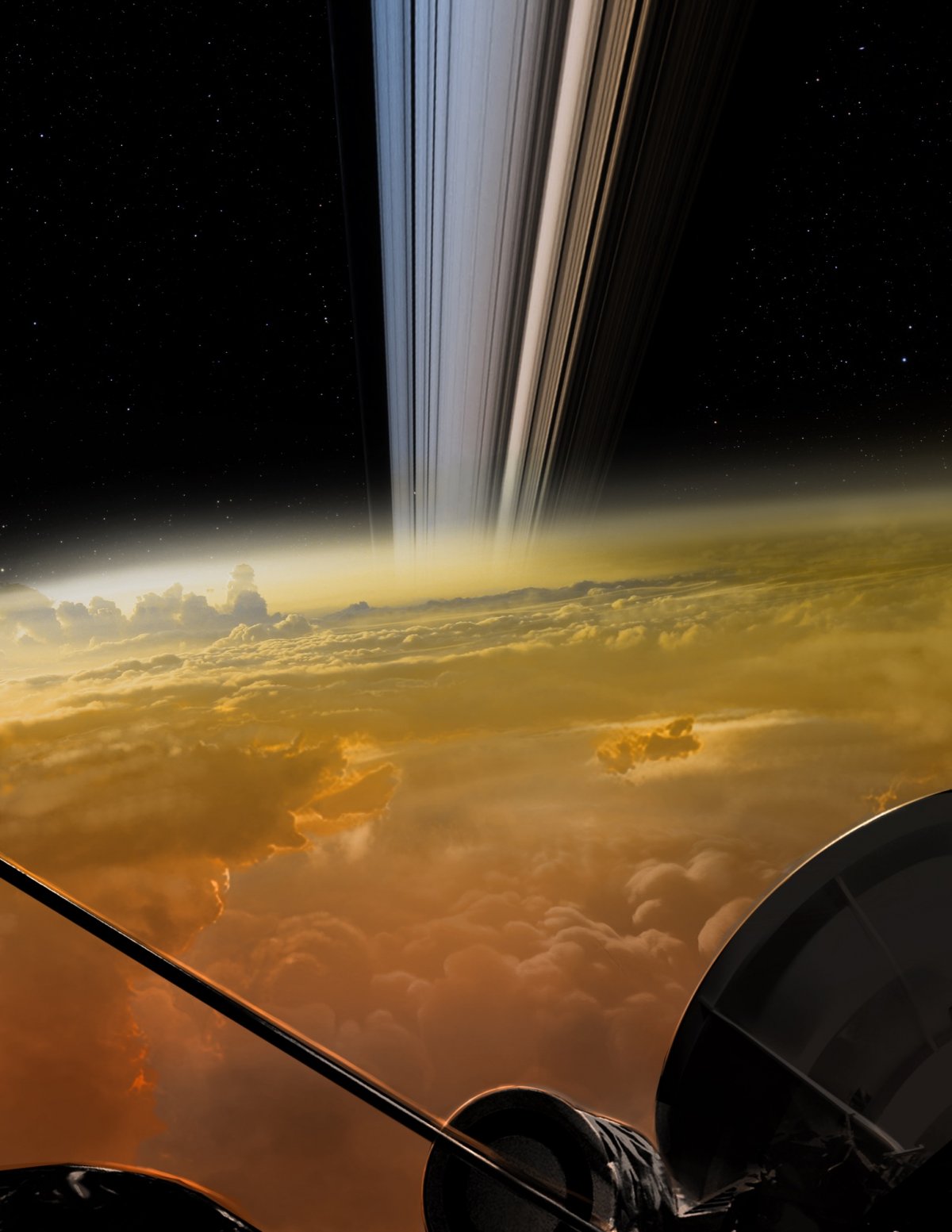 Above is an artist's view of what Cassini might see during its final plunge into the clouds of Saturn.

NASA hopes this closest-ever brush with Saturn will reveal new components of its atmosphere, which is believed to be about 75 percent hydrogen, with most of the rest being helium.

The false-color image above was taken with Cassini's narrow-angle camera on May 18, 2017, from a distance of approximately 750,000 miles (1.2 million kilometres).

The clouds on Saturn look like strokes from a cosmic brush because of the wavy way that fluids interact in Saturn's atmosphere.

So far, scientists have been unable to discern any tilt between Saturn's magnetic field and its rotation axis. That contradicts our understanding of magnetic fields, and makes it impossible to know exactly how long Saturn's days are. 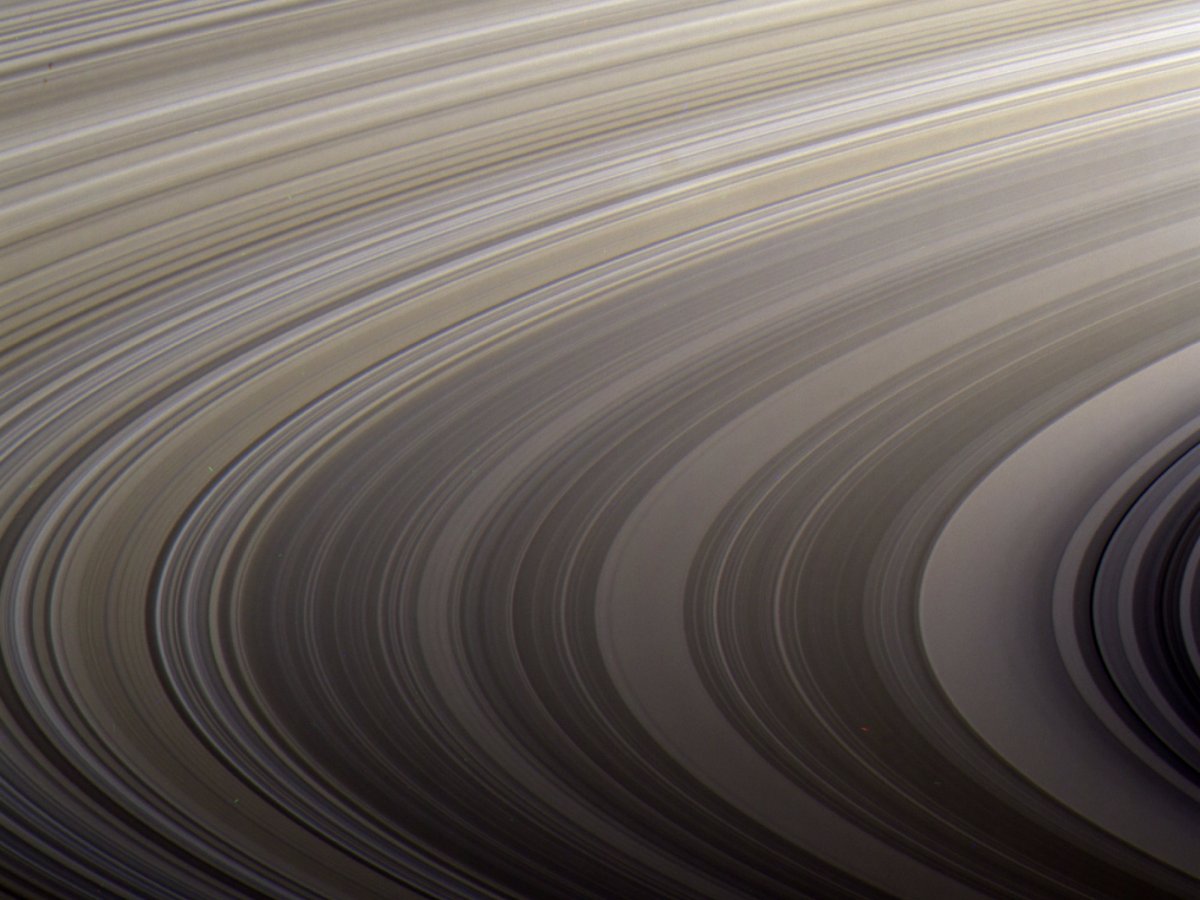 This is a close-up of the rings of Saturn as seen by Cassini.

Before getting to the Grand Finale stage, Cassini was able to capture this view of Saturn's moon Prometheus inside Saturn's F ring: 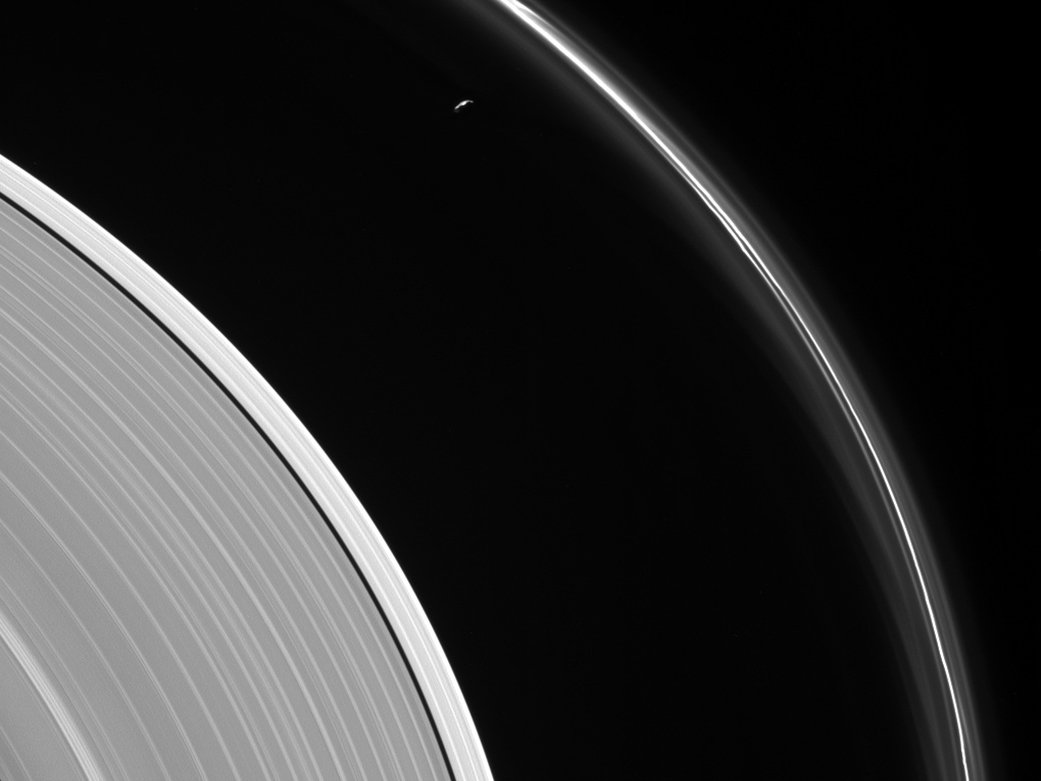 The Cassini spacecraft used its narrow-angle camera to take this image using visible light on May 13, 2017.

Many of the narrow F ring's faint and wispy features result from its gravitational interactions with Prometheus, which is 53 miles (86 kilometres) across.

On its next dip into Saturn's atmosphere on August 20, Cassini may be able to go even deeper. It could see the planet's northern aurora and measure the temperature of Saturn's southern polar vortex. 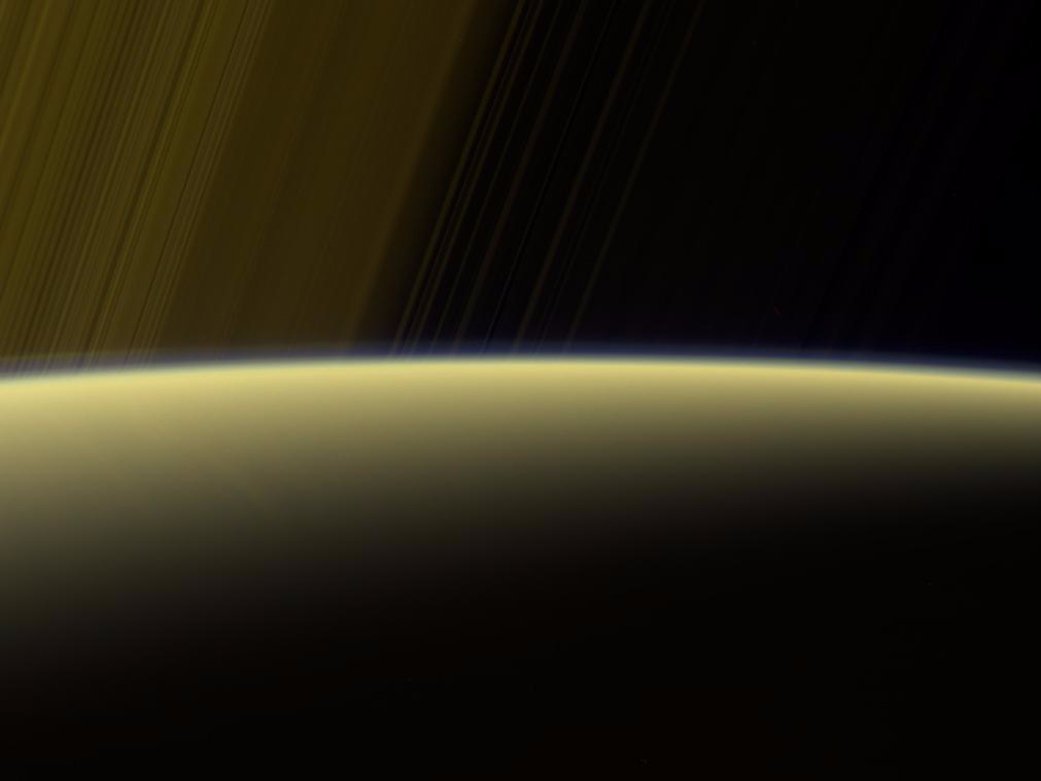 The view above is a false-color composite made using images taken in red, green and ultraviolet spectral filters. The images were obtained using Cassini's narrow-angle camera on July 16, 2017, at a distance of about 777,000 miles (1.25 million km).

To capture the image above, Cassini gazed toward the rings beyond Saturn's sunlit horizon. Along the limb (the planet's edge) at left can be seen a thin, detached haze. This haze vanishes toward the right side of the scene.

On its last dives through the rings, Cassini will also be able to analyse samples of Saturn's rings on its last dives. That will help scientists figure out how dense they are and better understand what they're made of. 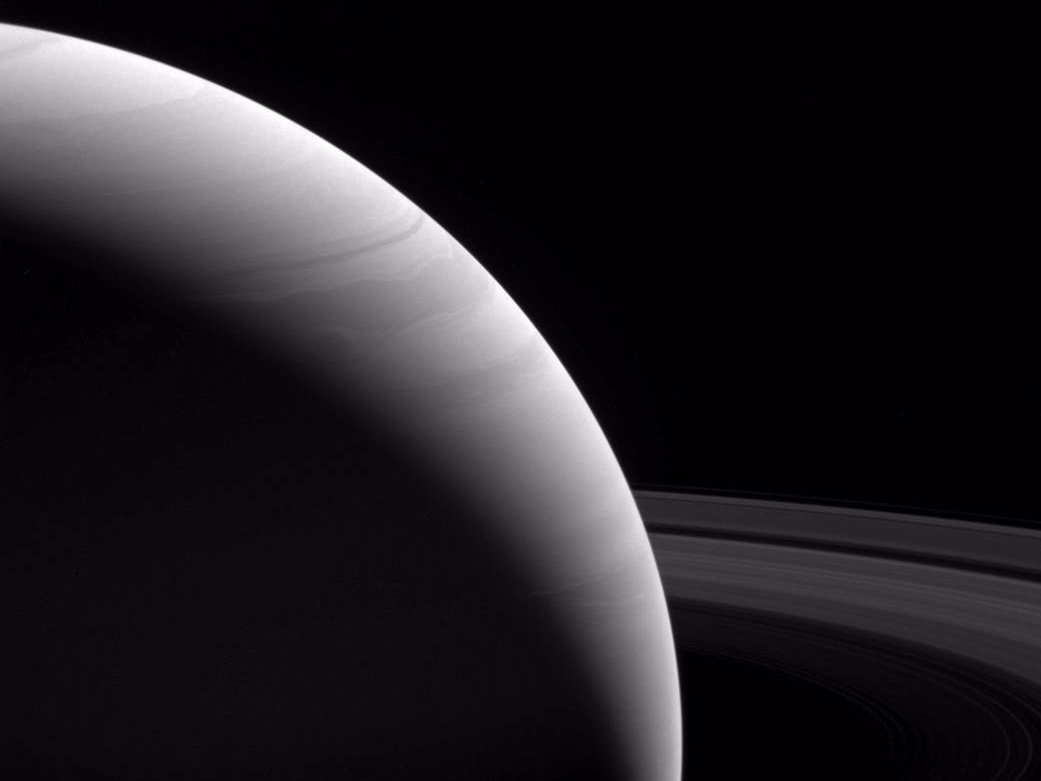 In the photo, the light of a new day on Saturn illuminates the planet's wavy cloud patterns and the smooth arcs of its vast rings. This view looks toward the sunlit side of the rings from about 10 degrees above their plane. 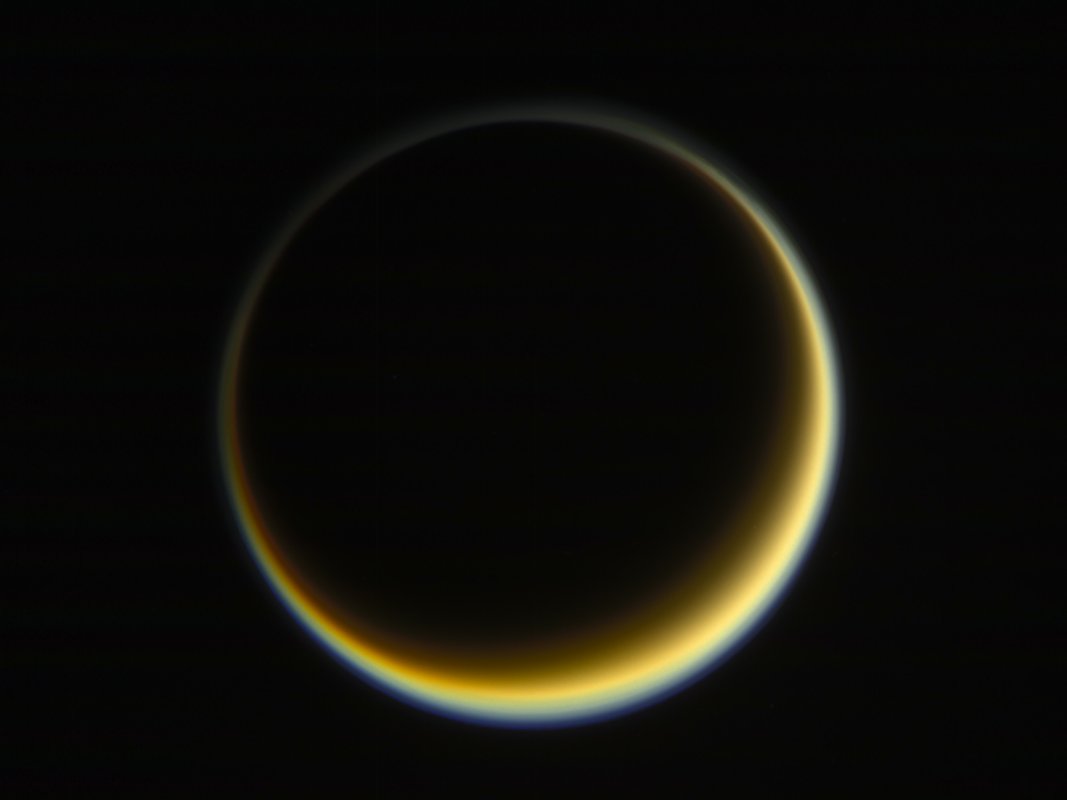 The Cassini spacecraft's narrow-angle camera captured this image of Titan on May 29, 2017.

NASA's Cassini spacecraft looks toward the night side of Saturn's moon Titan in a view that highlights the extended, hazy nature of the moon's atmosphere. The view was acquired at a distance of approximately 1.2 million miles (2 million kilometres) from Titan.