No matter how many images we see of our Solar System, we never get tired of gazing out into space, and the latest pictures of Jupiter are enough to make the jaws of even the most seasoned cosmic observers drop.

What you're looking at in the picture above is a new radio wave image made with the Atacama Large Millimetre/Submillimetre Array (ALMA) telescope group, providing a rare glimpse into what's happening beneath the swirling, colourful ammonia clouds we're more familiar seeing when Jupiter gets photographed.

The radio waves allow us to peer into atmospheric conditions following one of Jupiter's storms some 50 kilometres (31 miles) below the ammonia.

Not only are the images stunning, the data are providing valuable insight into how Jupiter's weather systems evolve - and suggest the storms are disrupting the colourful 'bands' on the top layer of the gas giant's 'surface'.

"ALMA enabled us to make a three-dimensional map of the distribution of ammonia gas below the clouds," says Imke de Pater, from the University of California, Berkeley.

"And for the first time, we were able to study the atmosphere below the ammonia cloud layers after an energetic eruption on Jupiter."

These energetic eruptions are similar to thunderstorms on Earth, and often involve lightning – they show up as small, bright plumes on Jupiter's visible cloud layer, but here the researchers were able to peer deeper. 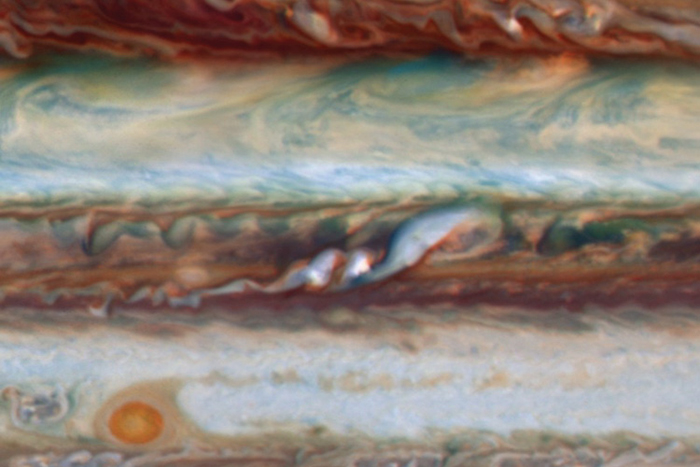 The radio wave images obtained from ALMA and other telescopes show high concentrations of ammonia gas, and the observations match one current hypothesis about how the white plumes form – that they're triggered by moist convection currents at the base of water clouds deeper inside Jupiter's atmosphere.

It seems these eruptions are enough to push ammonia gas way up above the main cloud deck to the tropopause – the coldest part of the atmosphere – where they spread out much like the lightning and thunder-laden cumulonimbus clouds here on Earth, causing visible white plumes as they freeze. They matched ALMA radio wave images with photos captured by the Hubble telescope and mid-infrared range pictures, all from the same period of time.

It's a fine example of the amateur astronomy community and scientists from multiple observatories and agencies working together to pull together something really special – another beautiful (and very useful) look at the largest planet in our Solar System.

"If these plumes are vigorous and continue to have convective events, they may disturb one of these entire bands over time, though it may take a few months," says de Pater.

"With these observations, we see one plume in progress and the aftereffects of the others."

The research has been accepted for publication in the Astronomical Journal and is available to read on the pre-print server arXiv.org.