The International Space Station has been leaking an unusual amount of air since September 2019.

At first, crew members held off on troubleshooting the issue, since the leak wasn't major. But in August, the leak rate increased, prompting astronauts and cosmonauts on board the orbiting laboratory to start trying to locate its source in earnest.

Cosmonaut Anatoly Ivanishin released a few leaves from a tea bag in the transfer chamber of the Zvezda Service Module the section of the station's Russian segment that houses a kitchen, sleeping quarters, and bathroom. Then the crew sealed the chamber off by closing its hatches, and monitored the tea leaves on video cameras as they floated in microgravity.

The leaves slowly floated toward a scratch in the wall near the module's communication equipment evidence that it was a crack through which air was escaping.

The crew has since patched the leak using Kapton tape, Roscosmos reported on Monday. 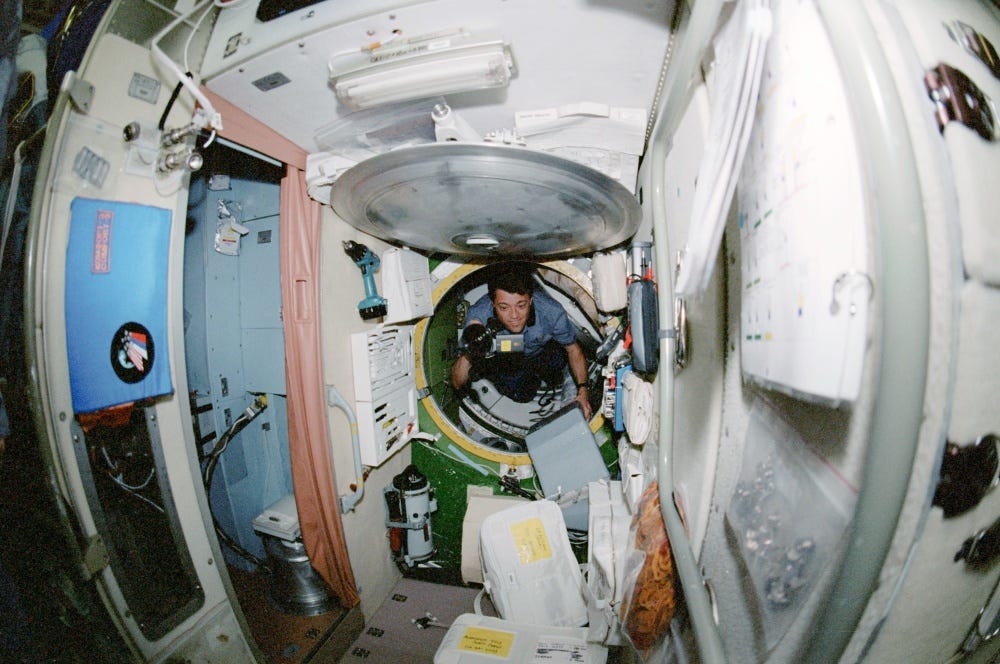 A year-long air leak on the space station

The International Space Station always leaks a little air. Normally, resupply missions carry highly pressurised containers full of a mix of oxygen and nitrogen to replace the air the ISS loses. The mix is designed to mimic Earth's breathable air.

But in September 2019, the standard leak rate increased slightly. That wasn't considered any major risk, but in August 2020, that already elevated rate increased fivefold, from 0.6 to 3.1 pounds of air per day, according to Russian news agency Ria Novosti.

So over the last two months, crew members hunted for the leak by isolating sections of the station and monitoring their pressure changes.

At first, crew members hunkered down in the Zvezda module while they tested the ship's other sections; when they couldn't find evidence of leaks in those sections, they determined the leak was likely in Zvezda itself.

Eventually, the astronauts and cosmonauts narrowed the source to Zvezda's transfer chamber. But they still couldn't find the leak's exact location.

Then came the tea-leaf trick.

"We believe that we have really identified the probable leakage area," Ivanishin said, according to Russian news agency TASS.

The tape the crew put over the crack can remain stable and sticky across a wide range of temperatures, including the near-absolute zero of space. But the members don't think the tape is likely to hold for long; they hope to replace it with a more reliable patch soon.

"Perhaps we should try hard patches our partners have? We can talk with them. This is because the current patch is not so efficient," one crew member said, according to TASS.

Roscosmos did not respond to Business Insider's questions in time for publication, but the agency noted in a tweet that it is "working out a program of operations to permanently seal the leak location."

NASA spokesperson Daniel Huot told Business Insider that the leak "continues to pose no immediate danger to the crew at the current leak rate."

Not the first problem on the space station's Russian side

The leak is one of several recent issues on the space station, which is starting to show its age after outlasting its 15-year life expectancy by five years.

The station's Russian segment houses some of the station's oldest modules. In the last few months, it has seen a toilet go bust and temperatures mysteriously increase. Then on Wednesday, the segment's oxygen supply system broke down. Crew members fixed the system by Saturday, according to Roscosmos.

But in aggregate, the failures are indications that the Russian side of the ISS is probably in need of upgrades.

This latest leak also wasn't the first on the Russian side. In August 2018, crew members discovered a 2-millimetre drill hole in part of a Russian Soyuz spaceship that was docked to the station.

The hole and patch in the Soyuz spaceship in 2018. (NASA/Chris Bergin/Twitter)

The hole seemed to stem from a manufacturing defect; someone on Earth had apparently plugged it with paint, hoping nobody would notice. The paint, it appeared, later broke off. Cosmonauts eventually patched that hole with epoxy sealant.