It's Official: A Brand-New Human Organ Has Been Classified

Researchers have classified a brand-new organ inside our bodies, one that's been hiding in plain sight in our digestive system this whole time.

Although we now know about the structure of this new organ, its function is still poorly understood, and studying it could be the key to better understanding and treatment of abdominal and digestive disease.

Known as the mesentery, the new organ is found in our digestive systems, and was long thought to be made up of fragmented, separate structures. But recent research has shown that it's actually one, continuous organ.

The evidence for the organ's reclassification is now published in The Lancet Gastroenterology & Hepatology.

"In the paper, which has been peer reviewed and assessed, we are now saying we have an organ in the body which hasn't been acknowledged as such to date," said J Calvin Coffey, a researcher from the University Hospital Limerick in Ireland, who first discovered that the mesentery was an organ.

"The anatomic description that had been laid down over 100 years of anatomy was incorrect. This organ is far from fragmented and complex. It is simply one continuous structure."

Thanks to the new research, as of last year, medical students started being taught that the mesentery is a distinct organ.

The world's best-known series of medical textbooks, Gray's Anatomy, has even been updated to include the new definition.

So what is the mesentery? It's a double fold of peritoneum - the lining of the abdominal cavity - that attaches our intestine to the wall of our abdomen, and keeps everything locked in place.

One of the earliest descriptions of the mesentery was made by Leonardo da Vinci, and for centuries it was generally ignored as a type of insignificant attachment. Over the past century, doctors who studied the mesentery assumed it was a fragmented structure made of separate sections, which made it pretty unimportant.

But in 2012, Coffey and his colleagues showed through detailed microscopic examinations that the mesentery is actually a continuous structure.

Over the past four years, they've gathered further evidence that the mesentery should actually be classified as its own distinct organ, and the latest paper makes it official.

You can see the new organ illustrated below: 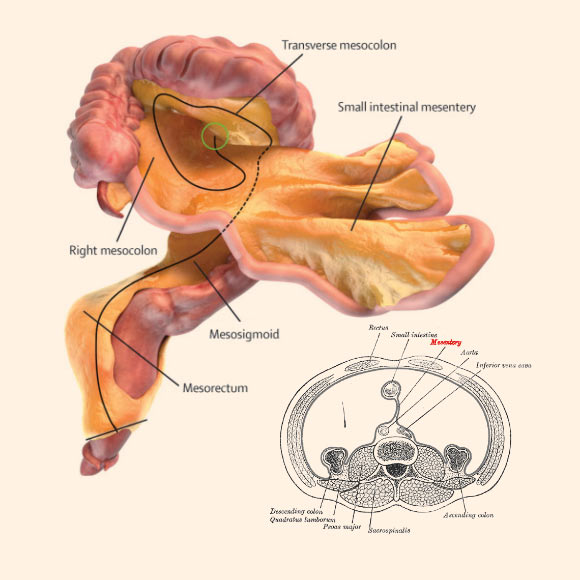 And while that doesn't change the structure that's been inside our bodies all along, with the reclassification comes a whole new field of medical science that could improve our health outcomes.

"When we approach it like every other organ… we can categorise abdominal disease in terms of this organ," said Coffey.

That means that medical students and researchers will now investigate what role - if any - the mesentery might play on abdominal diseases, and that understanding will hopefully lead to better outcomes for patients.

"Now we have established anatomy and the structure. The next step is the function. If you understand the function you can identify abnormal function, and then you have disease. Put them all together and you have the field of mesenteric science … the basis for a whole new area of science," said Coffey.

"This is relevant universally as it affects all of us."

It just goes to show that no matter how advanced science becomes, there's always more to learn and discover, even within our own bodies.

The research has been published in The Lancet Gastroenterology & Hepatology.