We all recognise Jupiter by its banded pattern of counter-rotating zones and belts – this can be seen even with small garden telescopes. These stunning structures are powered by fast jet streams that are visible in the planet's clouds.

But what happens near its poles and below its cloud tops has long been a bit of a mystery.

Thanks to its unique orbit, NASA's Juno mission has now revealed some of Jupiter's best-kept secrets.

The results, published in four papers in Nature, show that the planet has surprising "polygonal" shapes of cyclones at its poles – including a pentagon at the south pole – and that its banded structure persists to depths of 3,000 km.

From Earth and spacecraft in certain orbits, we can only see Jupiter's equatorial regions well. In fact, this has been the case for all previous missions to the planet.

Images from Voyager, Cassini and the Galileo orbiter provided magnificent views of the zone-belt structure and long-lived storms such as the Great Red Spot. The Galileo probe sampled only down to 160 km below the clouds in one location.

Juno has a unique, highly elliptical orbit, giving it the first good views over Jupiter's poles.

Every 53 days since July 2016, it has swept as close as 4,100 km above Jupiter's cloud tops, giving it excellent views of its aurora – a type of "northern lights" caused by electrical currents in the rapidly rotating magnetosphere (a magnetic field) interacting with the planet's atmosphere – and the polar regions of the atmosphere in visible, infrared and ultraviolet light.

NASA/JPL-Caltech/SwRI/MSSS/Kevin M. Gill As well as studying the aurora and magnetosphere, Juno also helps scientists probe the gravitational field of Jupiter's interior in exquisite detail by monitoring small tweaks to the spacecraft's orbit – down to 3,000 km below the clouds.

Being the largest planet in the solar system, Jupiter boasts a radius more than 10 times Earth's, at nearly 70,000 km.

The counter-rotating winds in the zones and belts reach speeds of 100 metres per second. Its main composition is hydrogen and helium – leftovers from the dense cloud of gas and dust, known as the solar nebula, that formed our solar system 4.6 billion years ago.

Further towards the centre, the pressure and temperature increase even further, and the hydrogen starts behaving like a metal. Models show that even further in we would reach an icy and rocky core with a radius about 20 percent of Jupiter's.

The models aren't that reliable though, and this is where Juno comes in.

Scientists were hugely surprised the first time they saw the poles of another gas giant – Saturn.

Cassini confirmed the Voyager discovery of a peculiar, huge hexagon feature in Saturn's atmosphere near the poles. This surrounds a polar hurricane with a diameter of 1,250 km.

At the larger Jupiter, scientists didn't expect to see this pattern at all. Instead, theories suggested that the zones and belts at the centre would weaken towards the poles leading to chaotic turbulence, rather than structured patterns. 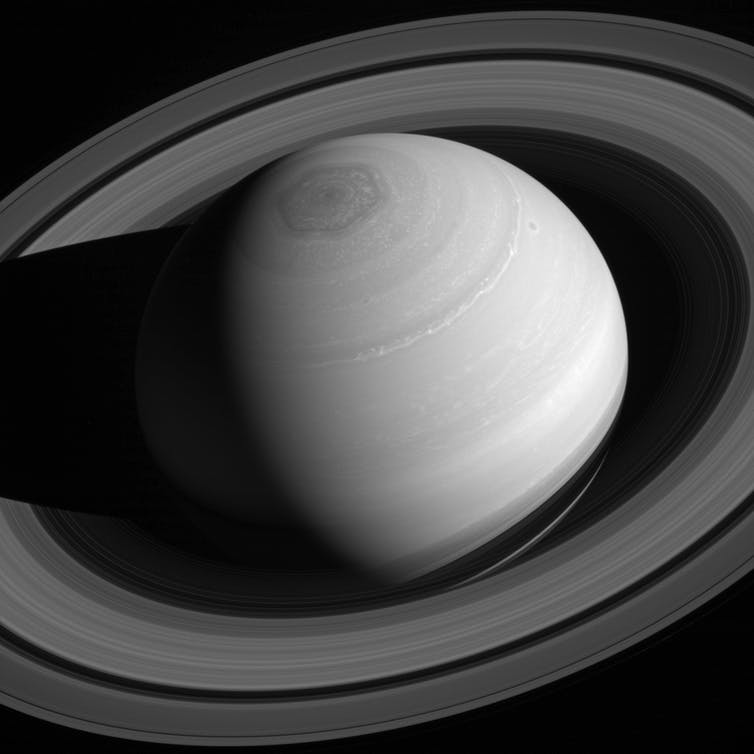 (NASA/JPL-Caltech/Space Science Institute) But thanks to Juno, scientists have now discovered a huge cyclone at each pole, about 4,000 km in diameter in the north and 5,600 km in the south.

Remarkably, these are surrounded by eight similarly sized cyclones in the north, and five in the south. These cyclones seem remarkably stable over the time that Juno has imaged them in the visible and infrared.

We don't understand yet what causes them and why they are so persistent.

The force from Jupiter's rotation, combined with its smaller radius at the pole, would be expected to move many more cyclones poleward continuously, but this seems not to happen.

Another of Jupiter's mysteries was whether its zones and belts were shallow or deep in the atmosphere. Juno's answer is deep.

This result came from measurements of its gravity field, which scientists have now discovered exhibit a north-south asymmetry.

This was unexpected at Jupiter – a heavy, fast rotating, oblate (flattened at the poles) planet. The explanation is that atmospheric flows below the clouds must be present.

Another paper reveals that these atmospheric jet streams circulate below each of the zones and belts, and reach all the way down to 3,000 km. However, the mass of atmosphere involved in these enormous motions corresponds to only about 1 percent of Jupiter's total mass. 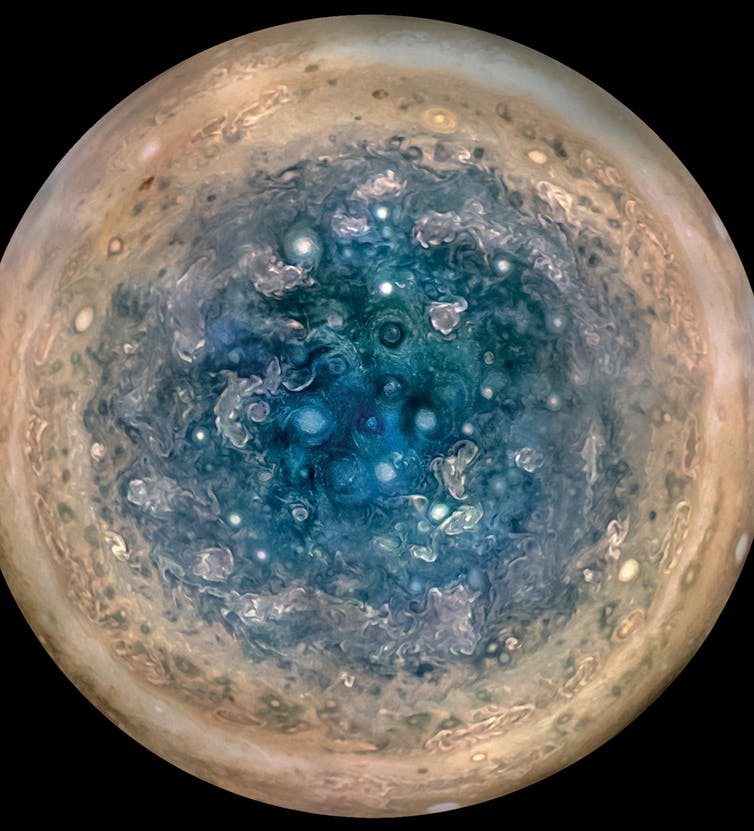 By monitoring how the whole planet rotates, scientists also discovered that below the 3,000 km level, Jupiter effectively spins as a rigid body – more slowly than the churning gas above.

At this level, the temperature and pressure causes electric currents to flow, and this creates a magnetic drag force which starts to slow the wind motion.

The new results can now be put in context with other bodies – in particular with Saturn, with its zone-belt winds reaching 500 metres per second. Based on what we know now about Jupiter, it seems likely that Saturn's jet streams reach even deeper to 9,000 km.

Comparing models of Jupiter's persistent cyclones with Saturn's hexagon and hurricane could also help us to understand what causes these mysterious features.

Excitingly, the new data can also help us to understand gas giant planets in other solar systems. For example, we know now that those larger than Jupiter would have less deep jet streams below their zones and belts.

Future missions like ESA's JUICE and proposed Saturn atmospheric probes may be able to see deeper than Juno can, to tell us more about the deep internal structure of this magnificent giant planet – ultimately helping us to get a full picture of how it formed and evolved.